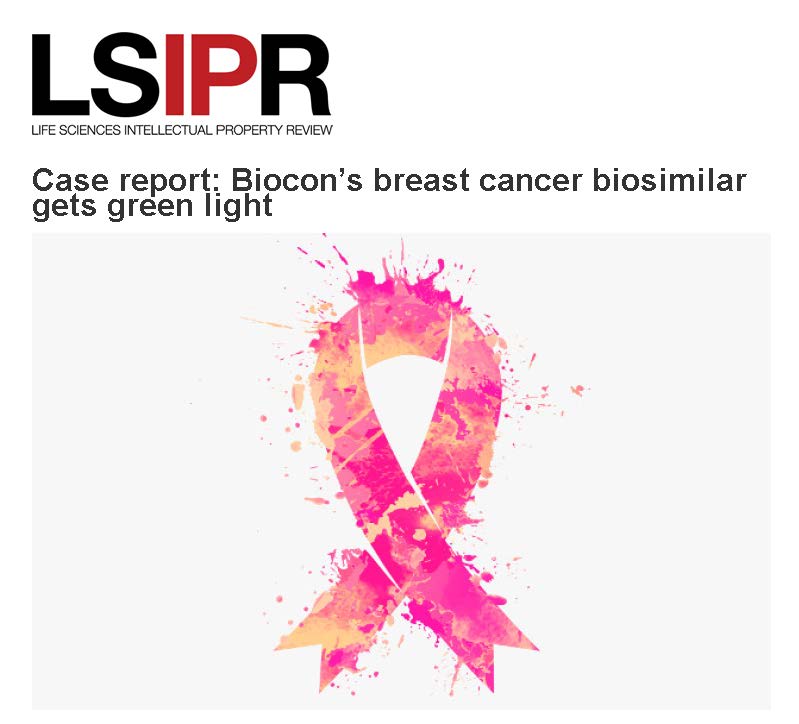 In a recent decision in India, biopharma company Biocon and its partner Mylan were allowed to continue marketing a biosimilar breast cancer drug, as Vikrant Rana and Sanjeeta Das of SS Rana report.

Trastuzumab is a monoclonal antibody used primarily for the treatment of HER2­positive breast cancer. It has been assigned international nonproprietary name (INN) status by the World Health Organization (the INN is an official generic and nonproprietary name given to a pharmaceutical drug or active ingredient in order to provide a unique standard name for the active ingredient and avoid prescribing errors).

The order dated April 25, 2016 was likely to have sweeping ramifications on the biomedicine industry as it imposed some restrictions on the sale and marketing of biosimilar drugs. The order was stayed by the Division Bench of the Delhi High Court on April 28, 2016 and subsequently on May 10, 2016 the appeal was further adjourned until July 21, 2016 with continued operation of the stay. Let us take a closer look at the events leading up to the present appeal.

Genentech is a biotechnology corporation and has been a subsidiary of Roche since 2009. The companies developed the drug trastuzumab in 1990, and after being granted approval by the Drugs Controller General of India (DCGI in 2002, Roche started importing and marketing the drug in India under the brand names Herceptin, Herclon and Biceltis. Additionally, Genentech obtained a formulation patent for trastuzumab effective from May 3, 1993, and it lapsed on March 3, 2013. Biocon and Mylan have been allegedly selling a biosimilar version of trastuzumab under the brand names Canmab and Hertraz respectively.

“Roche reportedly stated that it is not particularly against biosimilars, but will continue challenging companies that do not follow the Indian biosimilar framework.”

Aggrieved by the act of the DCGI in granting the approval of the biosimilar drug and by the conduct of Biocon and Mylan in selling the drug, Roche filed the earlier suit before the Single Bench of the Delhi High Court. As the single judge noted in paragraph 21 of the judgment, it was necessary to answer five main questions:

The primary grievance of Roche was the fact that Biocon and Mylan circumvented the approval process laid down in the 2012 biosimilar guidelines for selling the biosimilar version of the drug, and the impugned act on their part results in putting the health of cancer patients at risk. Since Biocon and Mylan got the approval in eight days, it inevitably calls into question the entire evaluation process.

Second, Roche contended that by using the testing and sales material of Herceptin in its own packaging and promotional material, Biocon was trying to take undue advantage of the considerable reputation that Roche’s Herceptin has attained in the Indian drugs market.

Last, on the issue of maintainability of the suit, Roche argued that the Delhi High Court did possess the jurisdiction to adjudicate the dispute in light of the fact that the defendants’ actions impinged the plaintiffs’ civil rights for which the plaintiffs could not approach any other forum except the High Court.

The single judge came to the conclusion that:

After the single judge’s ruling in the earlier case, Roche reportedly stated that it is not particularly against biosimilars, but will continue challenging companies that do not follow the Indian biosimilar framework. It further applauded the ruling of the single judge, stating that: “The ruling sends a strong, positive signal that the development, manufacture and approval of biosimilars in India must be subject to rigorous clinical and regulatory standards as per the applicable law.”

The judgment of Singh inevitably tries to find a middle ground between the problem of a lack of affordable lifesaving medication and strict adherence to the regulatory approval process. It will be interesting to follow the final decision of the Division Bench with regard to the way in which it tries to find a harmonious construction between the two opposing perspectives.

Additionally, the court’s observation that there is an impending need for a law relating to data exclusivity in India is a welcome move as the need was already felt by industry insiders for a long time. In the meantime, the much awaited 2016 “Proposed Guidelines for Similar Biologics”, which are expected to include a new post­market study on phase IV tests of biosimilar drugs, have yet to be officially announced.

This article was first published on the June Edition of LSIPR