Getting a patent on your innovation (LegalEra)

Patenting of innovation is essential to ensure that the company draws benefits from its own innovative and creative capacity. Due process, as laid down in the Patents Act, needs to be followed.

Abraham Lincoln once said: “the patent system adds the fuel of interest to the fire of genius”, clearly highlighting

The Intellectual Property Rights (IPRs) are the statutory rights resulting from intellectual activity in the industrial, scientific, literary and artistic field. The IP rights are exclusive and provide fi- nancial incentives to the owners and creators of the intellectual goods and services. These rights encourage crea- tivity and promote fair dealing that ulti- mately contributes to the economic and social development of the nation.

The history of patents and patent laws is generally considered to have started in Italy with a Venetian Statute of 1474 that  was  issued  by  the  Republic  of Venice. As dissemination of ideas is a significant aspect of world trade, crea- tors  demand  protection  of  the  same. As the extent and enforcement of such rights  varied  across  the  world,  there was  a  need  for  its  harmonization  for efficient    and    healthy    international economic relations. The Paris Conven- tion  for  the  Protection  of  Industrial Property,  signed  in  Paris,  France,  on March  20,  1883,  was  one  of  the  first intellectual property treaties. It estab- lished  a  Union  designed  to  help  the people of one country to obtain protec- tion in other countries for their intel- lectual assets.

World  Intellectual  Property  Organi- zation   (WIPO)   was   created   on   the same  lines  in  1967  to  encourage  crea- tive activity and to promote the protec- tion of intellectual property throughout the   world.   WIPO   administers   about 21  international  treaties  in  the  field of   intellectual   property.   The   Patent Cooperation  Treaty  (PCT)  is  one  such treaty  administered  by  WIPO  for  in- ternational  co-operation  in  the  fields of  patents.  It  presents  a  mechanism by  which  an  applicant  is  required  to make only a single patent application. PCT,  however,  does  not  provide  for grant  of  patent  and  the  responsibility of  granting  the  patent  lies  exclusively in the hands of national patent offices. The World Trade Organization (WTO) Agreement  on  Trade-Related  Aspects of Intellectual Property Rights (TRIPS) came into force in 1995 and gave new dimensions and meaning to the multi- lateral  protection  and  enforcement  of IP rights.

A patent is a monopoly granted by the state for an invention that is new, in- volves an inventive step and is capable of industrial application. The owners are given exclusive rights to prevent others from making, using, selling, of- fering for sale or importing a process or products in respect of which the patent has been granted. The exclusive rights subsist for a period of twenty years from the date of filing the application.

The  essential  features  for  the  grant of  patents  in  India,  laid  down  by  the Patents Act, 1970, are novelty, inven- tive step and industrial applicability.

The aforementioned features as de- fined in the Patents Act are briefly dis- cussed below:

It  is  interesting  to  note  that  from  the year 1970 till January 1, 1995 only proc-ess patents were granted in India. The Patent laws were later amended to meet the   obligations   of   TRIPS   agreement and to be in conformity with Article 27 of TRIPS that allowed for the grant of both the process and product patent.

An invention may satisfy the conditions of novelty, inventiveness and useful- ness but it may still not qualify for a patent under the following situations:

In accordance with the provisions of Patent Act, the inventor, his assignee or legal representative of deceased person, who before his death was either the in- ventor or assignee, can apply for patents at the head office of the Indian Patent Office or its branches depending  upon in whose jurisdiction he resides or has a domicile or has a principle office of busi- ness. In case of a foreign applicant, the application can be filed at the appropriate office, in whose jurisdiction the address for service or patent attorney’s office is situated.

Before an applicant files and applies for patents, it is generally advisable to perform a prior art search. The huge amount of data available in the patent and non-patent lit- erature, scientific journals, textbooks, con- ference proceedings, websites and trade publications may render the  invention obvious and non-novel. A prior art patent- ability search can thus prevent wastage of resource and time on patent application if the search uncovers prior art reference that may preclude patenting of invention.

Following types of applications are recognized by the Patent Act:

These applications are filed with the Indian Patent Office without claiming priority from other applications.

A patent application filed under the PCT is called an international application. It represents a mechanism by which an applicant  is  required  only  to  make  a single patent application. After filing an international application through PCT, the applicant has up to 30/31 months to enter the national phase in the member country.  It  should,  however,  be  men- tioned here that the PCT does not pro- vide for grant of Patent, the responsibil- ity of granting or rejecting the patents lies exclusively with the regional patent offices on the basis of their local Patent law and rules. PCT thus is only a “filing system” and not a “grant system”.

The international application designating and filed in India, within 31 months from the date of the earliest priority is known as the PCT national phase application.

Every application for a patent shall be made on Form 1, and shall be for one invention only or a group of inventions which are linked to each other by a sin- gle inventive concept.

Along with the application for appli- cation for grant of patent and speci- fication, the applicant is required to submit the following:

Annuity fee is payable every year to keep the patent in force. 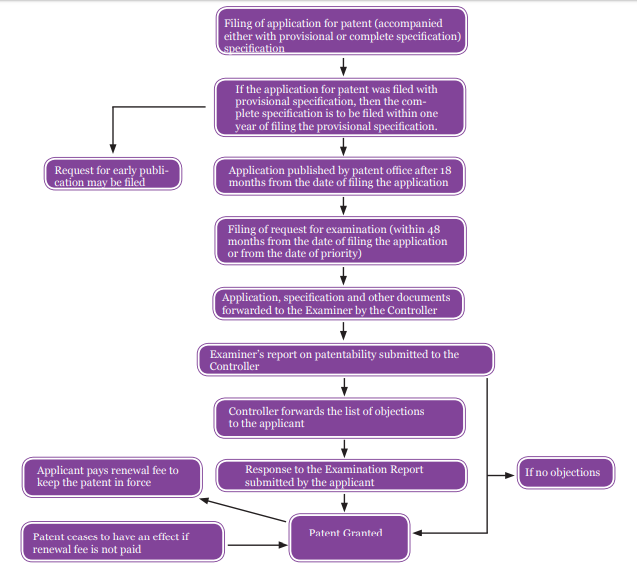 Companies innovate to improve their manufacturing processes and to introduce new products to meet actual and emerg- ing needs of business and clients. Patenting of innovation is essential to ensure that the company draws benefits from its own innovative and creative capacity.

A patent would also help companies in following ways:

It would not be wrong to state that the innovative industry in India can gain impetus and competitive and economic ad- vantage in the global market if it develops the necessary expertise for manufacturing new products, which are patented. The incentives that one derives from patenting would prove to be beneficial and extremely useful in promoting innova- tions and IP protection in industries, academic institutions and R&D sectors.