Hyundai slapped with a fine of Rs. 420 crore by Competition Commission of India

The Competition Commission of India (CCI) on July 27, 2015 passed an order imposing a hefty penalty of Rs. 420 crore on leading automobile company Hyundai Motors India Ltd., for violating the provisions of Competition Act 2002.

Brief Facts of the Case

Shri Shamsher Kataria (hereinafter referred to as the Informant) initially filed an information under Section 19 (1) (a) of the Competition Act 2002, against automobile manufacturers Honda Seil Cars India Ltd., Volkswagen India Pvt. Ltd and Fiat India Ltd. alleging anti-competitive practices on the grounds that the genuine spare parts of automobile manufacturers by them were not made freely available in the market;

Findings of the DG with respect to Hyundai

Decision of the Commission:-

The CCI passed its order with respect to the automobile manufacturers Hyundai, Reva and Premier (hereinafter referred to as ‘car manufacturers’) and made the following observations in the matter:

IPR exemptions under the Act

That as per the observations of the DG and submissions made by car manufacturers, none of them own any registered IPR on any of their spare parts as such in India. It has been admitted by Hyundai and MIL that they do not possess any valid IPRs in India except for its trademark/logo.

That the license agreement entered into between Hyundai and HMC did not specify the technologies, patents, knowhow, copyrights and other IPRs which are being granted to Hyundai. 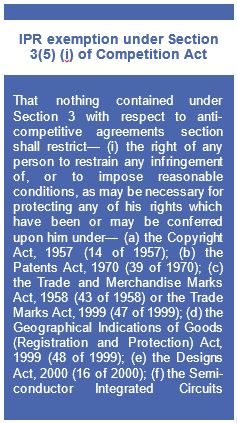 whether the condition imposed by the IPR holder can be termed as “imposition of a reasonable conditions, as may be necessary for the protection of any of his rights”.

That mere selling of the spare parts, which are manufactured end products, does not necessarily compromise upon the IPRs held by the OEMs in such products. Therefore, the OEMs could contractually protect their IPRs as against the OESs and still allow such OESs to sell the finished products in the open market without imposing the restrictive conditions.

That trade secrets and confidential knowledge, are not among the listed categories of IPR laws and hence Hyundai cannot claim any exemption under section 3(5)(i) of the Act;

The CCI directed the car manufacturers to cease from indulging in such restrictive trade practices and imposed a penalty of Rs. 420 Crores on Hyundai.

The present order condemns the prevalent conduct of car manufacturers of entering into exclusive supply agreement for supply of spare parts which limits the choice of customers and also leads to unfair trade practices in the relevant market.