India: “Building Trademarks” and the Right to Click Pictures 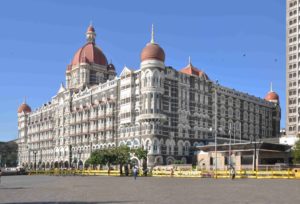 The very definition of a trademark under Indian law stresses the need to be “graphically represented”, i.e. in a two-dimensional form.
Section 2(1)(zb) of the Trade Marks Act, 1999 defines a trademark as –

“…a mark capable of being represented graphically and which is capable of distinguishing the goods or services of one person from those of others…” Such a mark may include: “…a device, brand, heading, label, ticket, name, signature, word, letter, numeral, shape of goods, packaging or combination of colours or any combination thereof.”

These requirements exist for entirely practical reasons. Representations must clearly demonstrate the nature of the mark and show each feature clearly enough to permit proper examination, and thereafter, must allow the ordinary consumer to comprehend what is being claimed as a trademark. For a non-traditional trademark, such as a colour, shape, sound or smell, the application must include a concise and accurate description of the trademark, whether as a written description, or in the form of a picture. This description is not a mere formality and in fact plays an essential role when considering the role of the mark in trade.

However, with changes in society, technology and the paradigms of representation, what constitutes a trademark has been evolving over the last few decades, and perhaps has even more evolving to do. The Indian trademark law has already recognized three-dimensional or shape marks, as well as the packaging and “trade dress” of goods. The recently announced Trade Mark Rules, 2017, have taken a further step by including “sound marks” within the ambit of what may now qualify as a trademark. Rule 26 of the new Trade Mark Rules now provides for the representation of sound marks as applicable trademarks. In this respect, a sound mark application may be submitted
“…in the MP3 format not exceeding thirty seconds’ length, recorded on a medium which allows for easy and clearly audible replaying accompanied with a graphical representation of its notations”. Thus, we see that even with regard to sound marks, graphical representation has not been completely done away with. The sound will need to be represented “graphically” in the form of musical notations.

Yet another milestone in Indian trademark law was achieved with reputed newspapers recently claiming that Taj Mahal Palace Hotel in Mumbai became the first building in India to achieve trademark protection for its architectural design. While the provision to copyright architectural plans and layouts (which we shall discuss at length subsequently) has been around for quite some time, ‘trademarking’ buildings and other architectural designs has been a hotly debated topic all around the world, with the principal question being whether they qualify for such protection, and what the granting of such rights to an architectural structure would entail. The following is a tabular representation of the registration/application numbers – 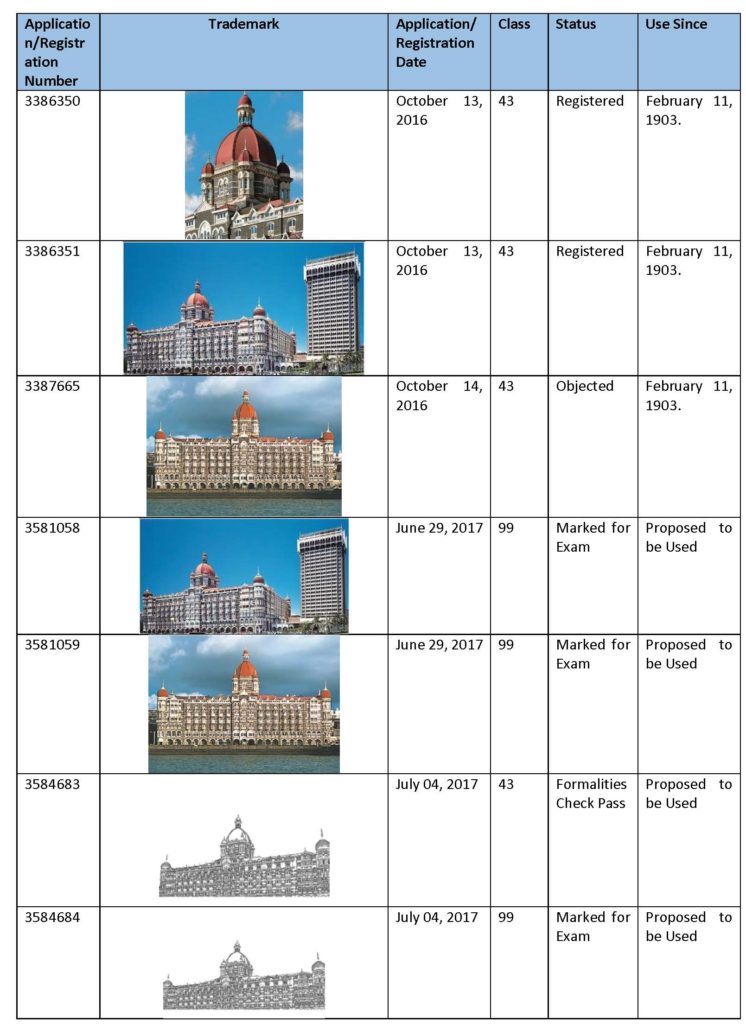 The Taj Mahal Palace Hotel may be the first building to be granted trademark protection in India, but several landmark buildings around the world, principally in the United States of America have already achieved this distinction. A few such examples are – 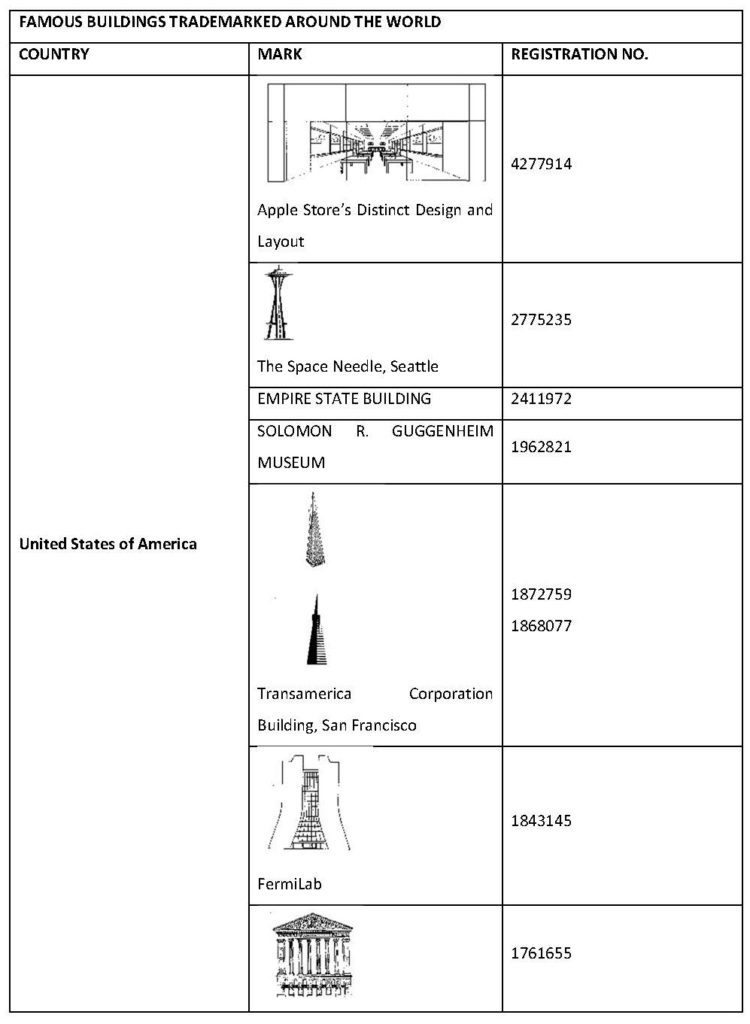 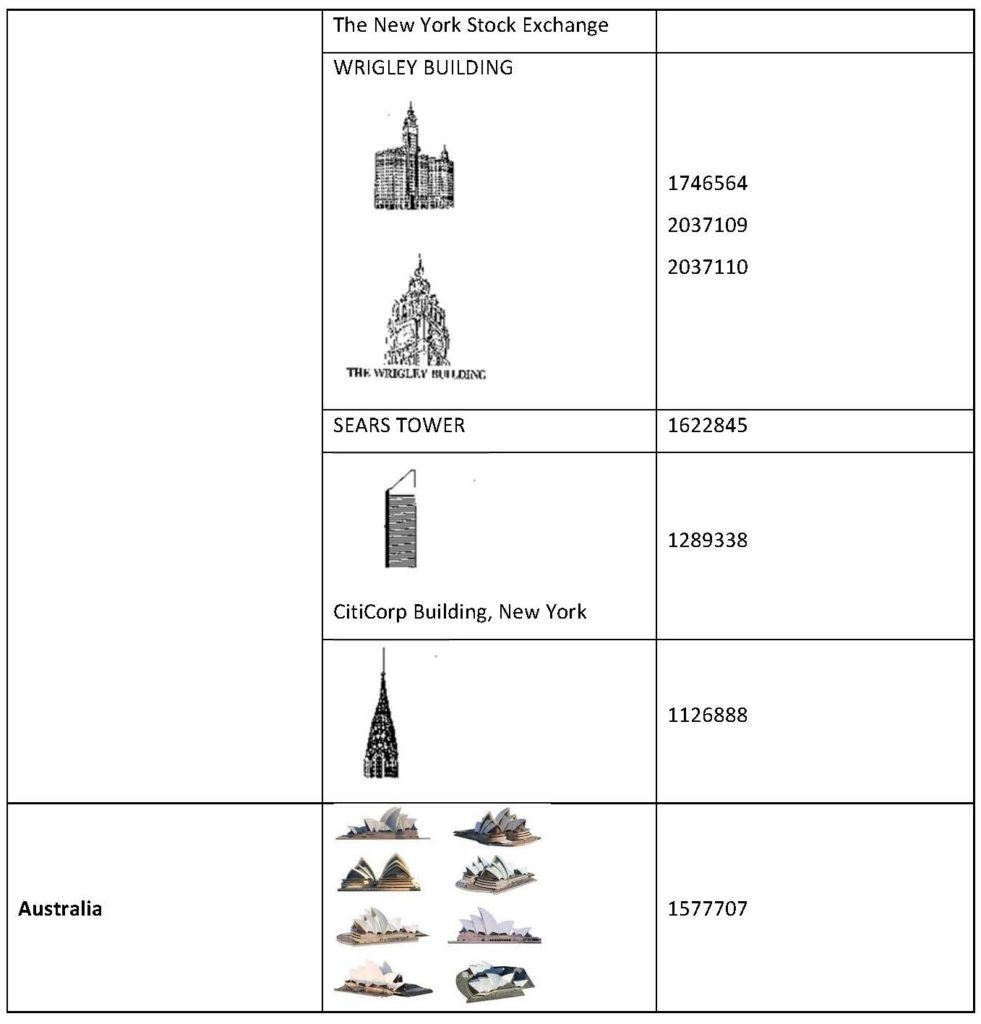 Under the American Lanham Act, architectural works are also eligible for registration. Therefore, the USPTO’s procedure provides for registration of an architectural structure as a trademark if “the three-dimensional configuration of a building is able to be registered only if it is used in such a way that it is or could be perceived as a mark. ”

any signs, in particular words, including personal names, or designs, letters, numerals, colours, the shape of goods or of the packaging of goods, or sounds, provided that such signs are capable of:

(b) being represented on the register, in a manner which enables the competent authorities and the public to determine the clear and precise subject matter of the protection afforded to its proprietor.

The natural implication of this is that it will now become much easier for brand owners to apply not only for colors, three-dimensional shapes, sounds and scents as trademarks, but it also opens up new avenues for the eventual registration of marks in the form of holograms or even movement marks, such as in the form of GIFs!

From a practical point of view, though, there will remain uncertainties and technical obstacles to the protection of unconventional trademarks. These obstacles are inherent to the current filing system for trademark applications, the examination process, and the need for a mark to be distinctive. Even though the assessment of eligibility of non-traditional trademarks will indeed be a challenge, it is exciting to ponder upon the new trademarks that are likely to come into being as a result of these revolutionary changes.

So, what is the right all about?

What happens if a third party commercially exploits the image e.g., to make coasters, fridge magnets or let us say postcards with image identical or similar to the registered mark. Will the registration recently granted help? The answer is – it will be persuasive, however, the owner of ‘Taj Mahal Palace’ hotel will need to establish its reputation and goodwill, that is, rely upon its common law rights that exist independent of registration to stop a third party from copying its trade mark. As per the Indian trademark law, the current registration only grants exclusive rights in relation to services for which registration has been granted. Therefore, ideally Indian Hotels Company should have also filed applications in Class 14, 16, 21, and 25,etc, to enlarge its statutory right and prevent others from commercially using the said images in printed matter, souvenirs or other products in that class. Thus, by necessary inference, tourists are very safe to take photos with the ‘Taj Mahal Palace’ hotel in the background during their next trip to Mumbai as long as the same are not for commercial use.

A case for panorama rights?

To move the debate away from trademark law, it is pertinent to mention over here that the European Union Copyright law has a provision, colloquially called ‘Freedom of Panorama’, that permits taking photographs and video footage and creating other images (such as paintings) of buildings and sometimes sculptures and other art works which are permanently located in a public place, without infringing on any copyright that may otherwise subsist in such works, and the publishing of such images. It limits the right of the copyright owner to take action for breach of copyright against the creators and distributors of such images. It is an exception to the normal rule that the copyright owner has the exclusive right to authorize the creation and distribution of derivative works. The phrase is derived from the German term
Panoramafreiheit (“panorama freedom”).

Directive 2001/29/EC of the European Union provides for the possibility of member states having a freedom of panorama clause in their copyright laws
Panoramafreiheit is defined in Article 59 of the German
Urheberrechtsgesetz, and in the United Kingdom, Section 62 of the Copyright, Designs and Patents Act, 1988, states that
“a copyright in a building (sculptures, models for buildings and works of artistic craftsmanship) is not infringed by (a) making a photograph or film of it or by (b) making a broadcast or a visual image of it.

However, the law in France is not as liberal as its counterparts in Germany and the UK. Article L122-5 of the French Code of Intellectual Property only provides for a
‘limited’ freedom of panorama for works of architecture and sculpture. The code authorizes
“reproductions and representations of works of architecture and sculpture, placed permanently in public places (voie publique), and created by natural persons, with the exception of any usage of a commercial character” . The limits to freedom of panorama in France have a drastic effect on Wikipedia articles about French architecture. Wikimedia Commons editors routinely delete any images of recent French architecture. For example, on February 1, 2017, the image of the new Philharmonie de Paris concert hall by architect Jean Nouvel, opened in 2015, was deleted as a violation of freedom of panorama. There is no clear image of the Louis Vuitton Foundation building, opened in Paris in 2016; only a poor quality image where the building is unidentifiable, and another where it mostly hidden by trees.

Moving westwards from the continent, in Canada, Section 32.2 (1) of the Copyright Act states that,
“it is not an infringement of copyright for any person to reproduce, in a painting, drawing, engraving, photograph or cinematographic work, an architectural work, provided the copy is not in the nature of an architectural drawing or plan, or a sculpture or work of artistic craftsmanship or a cast or model of a sculpture or work of artistic craftsmanship, that is permanently situated in a public place or building”.

Finally, in the United States, the Copyright Act of 1976, states that,
“the copyright in an architectural work that has been constructed does not include the right to prevent the making, distributing, or public display of pictures, paintings, photographs, or other pictorial representations of the work, if the building in which the work is embodied is located in or ordinarily visible from a public place.”

With regard to India, the Copyright Act, 1957, also provides for exception to copyright infringement. Though the phrase “Freedom of Panorama” is not expressly mentioned in the statute itself, but a constructive interpretation of Section 52 (1) (s) and (t) together gives Indian law the scope for Freedom of Panorama. While Section 52 (1) (s) provides for an exception in so far as making or publishing of a painting, drawing, engraving or photograph of a work of architecture, Section 52 (1) (t) extends a similar right as against sculptures and works under Section 2 (c) (iii) i.e. “any other work of artistic craftsmanship”. This is where the panorama exception in India can be appreciated. Whereas most of the above quoted European and American legislations are subject to qualifications like non-commercial use, as it only allows for freedom of panorama if the copyrighted work is put to use for non-commercial or educational purposes, the Indian law is not subject to such qualifications.