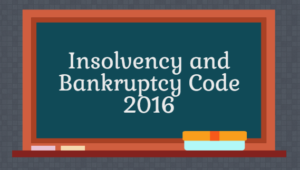 The objective of the Insolvency and Bankruptcy Code, 2016 (hereinafter referred to as the ’Code’) is multi-faceted. Not only does it seek to promote entrepreneurship, by making availability of credit more transparent, but it also balances the interests of all stakeholders by consolidating and amending the laws relating to reorganization and insolvency resolution of corporate persons, partnership firms and individuals, in a time bound manner and for maximization of the value assets of such persons and other related matters.

The former framework of insolvency and bankruptcy provisions were inadequate, ineffective and resulted in undue delays in resolution, which is why the present Code was brought into effect. One of the primary objectives of the Code is to bring the insolvency law in India under a single unified umbrella with the intention of speeding up the insolvency process.

In the recent judgement of M/s Innoventive Industries Vs. ICICI Bank & Anr (Civil Appeal Nos. 8337-8338 of 2017) passed by the Hon’ble Supreme Court of India, the functionality and operation of the Code has been discussed elaborately.

In furtherance to the service of debts, a corporate debt restricting was proposed by Innoventive Industries which was admitted and thus a Master Restructuring Agreement (MRA) was entered into between the parties by which funds were to be infused by the creditors and certain obligations were to be met by the debtors.

An application was filed by ICICI at National Company Law Tribunal (NCLT) alleging that Innoventive Industries was a defaulter within the meaning of the Code, and prayed for insolvency resolution process to be set in motion. Innoventive Industries replied to the same by filing an interim application claiming that no debts were legally due vide the notifications issued under the Maharashtra Relief Undertakings (Special Provisions Act), 1958 (hereinafter referred to as the ‘Maharashtra Act’) and accordingly its liabilities were temporarily suspended for a period of one year in the first instance and for another period of one year subsequently. Innoventive Industries further pleaded via second application that owing to non-release of funds under MRA, it was unable to pay back its debts.

The Hon’ble Supreme Court upheld the decision of NCLT and NCLAT that the obligation of the corporate debtor was unconditional and did not depend upon infusing of funds by the creditors under MRA.

Further the Court categorically stated that the appeal by Innoventive Industries was not maintainable as the erstwhile directors were no longer in the management once an insolvency professional was appointed to manage the company.

The Court gave comprehensive reasoning for its decision which was based on the following points:

The aforesaid judgement has dealt with the aims and objectives of the Insolvency and Bankruptcy Code 2016 in exhaustive details. It has not only clarified the purpose of the Code, but, had also focused on its efficacious implementation. Instilling confidence in the creditors, it is a comprehensive, systemic and speedy reform which paves way for development and progress. It has reposed the faith in the judicious approach of the legislature inculcating protection against unscrupulous debtors escaping and delaying the repayment of debts incurred by using the legislative framework thereby preventing taking advantage of one’s own wrong.