In a recent appeal in a trademark infringement dispute in Mona Aggarwal & Anr. v. Glossy Colour & Paints Pvt. Ltd. & Anr.
FAO(OS) 572/2015 & CM 23119/2015, the Delhi High Court has dealt with the issue whether the numeric trademark ‘6004’ is an infringement of the numeric trademark ‘1001’. In the appeal, the finding of the Single Bench of the Delhi High Court against the Defendant/ Appellant i.e. Mona Aggarwal trading as Multi Group of Suppliers, restraining it from using the impugned numeric mark ‘6004’ has been challenged.

As per the learned Single Judge, the colour scheme, get-up, layout and arrangement of features of the trademark ‘6004’ was deceptively similar to ‘1001’ hence is likely to confuse purchasers of the goods, illiterate and semi–illiterate both. The said conclusion was reached by applying the test of a man of average intelligence with imperfect recollection. First appeal has been preferred against the said judgment before the learned Division Bench.

Contentions by the Appellants, i.e. Mona Aggarwal trading as Multi Group of Suppliers

The impugned mark ‘6004’ was not dishonestly adopted. 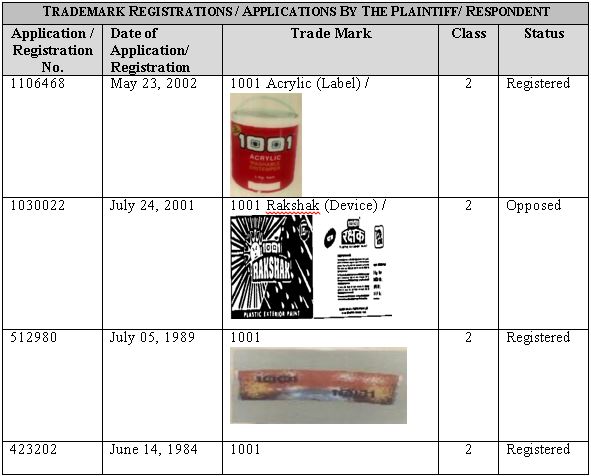 Observations and Decision of the Division Bench of the Delhi High Court:

The aforesaid order of the Division Bench of the Delhi high Court can be accessed here.

Meanwhile, our research team has also put together a list of some entities having applications / registrations of the numerical trade mark ‘1001’ in class 2, as under: 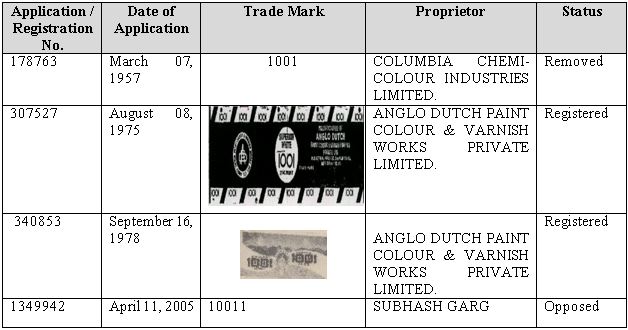 It is pertinent to mention here that the above Application no. 1349942 by Mr. Subhash Garg had been opposed by Glossy Color & Paints Pvt. Ltd. who had also filed a suit before the High Court of Delhi bearing no. C.S. (OS) No. 1104 of 2005 against the said applicant. The said suit appears to have been referred to the Delhi High Court mediation and conciliation centre, where, during the meditation proceedings, a settlement is stated to have been arrived at between the parties and Mr. Subhash Garg is stated to have agreed to withdraw the application for registration of his mark 10011.

To answer the question – can a numeral or number be registered as a trademark in India? – the definition of a ‘mark’ under Section 2 (m) of the Indian Trade Marks Act, 1999 includes a numeral also. Of course, the general criteria required for a number or numerical to be registered as a trademark remains the same i.e. it is distinctive in relation to the goods and services covered by the trademark application. Therefore, an applicant is likely to succeed in obtaining protection of a number as a trademark if the number is distinctive in relation to the products and services for which registration is sought. However, what numeral makes a good trade mark is a matter of discretion by the Registry or, during a dispute, the Judiciary. The strength of the number may also be a factor in determining the distinctiveness of the mark. For example, a one or two digit number may be difficult to get registered as a trademark for lack of distinctiveness, whereas, a number of a higher digit strength is more likely to be granted registration. Basically, higher the digit strength, higher are the chances of it meeting the distinctiveness criteria and being granted registration. This area of Trademarks Law, though relatively less discussed, is quite an interesting field and has potential for a multitude of disputes like the aforementioned case, especially in respect of monopolistic tendencies of traders over their number trademarks.