Infringement and Passing Off in Pharmaceutical Trademarks to be Minimum

A Single Bench of Hon’ble Delhi High Court vide its order dated April 20, 2021, granted an ex-parte ad-interim injunction in favour of the Plaintiff Mankind Pharma Limited and the Defendant Novakind Bio Sciences Private Limited, restraining the company from further manufacturing, either on its own behalf or through any job worker, marketing or clearing for sale in the market any pharmaceutical product bearing the ‘KIND’ suffix or which may in any manner infringe the registered trademarks of the Plaintiff.

SUBMISSIONS MADE OB BEHALF OF THE PLAINTIFF:

The Plaintiff is the fifth largest pharmaceutical company in India, and claims to be the registered proprietor of the mark, ‘MANKIND’, in all 45 classes, with 78 registrations of ‘MANKIND’ in various classes. The mark ‘MANKIND’, has been certified as a well-known trademark by the Registrar of Trade Marks and is published in the list of well-known trademarks maintained by the Registrar. The Plaintiff claims to hold 120 registrations in Class 5 alone, wherein the suffix ‘KIND’, is the essential feature of all marks, such as ‘DEXAKIND’, ‘DENTAKIND’, ‘METROKIND’ and ‘MOXIKIND’. The suffix ‘KIND’ is, therefore, according to the Plaintiff, the essential or dominant feature of its family of marks and the Plaintiff, is, therefore, entitled to seek remedy against infringement and passing off thereof.

The Senior Counsel for the Plaintiff brought to the notice of the Hon’ble Court, that on the strip of DEFZAKIND medicine, Defendant is using the insignia ® with ‘NOVAKIND BIOSCIENCES’, representing it to be a registered trademark, whereas their application for this mark is not registered till date. Further, the Defendant is using insignia ™ with DEFZAKIND, representing it to be a valid trademark, application for which, already stands abandoned in the records of the Trade Marks Registry, due to non-filing of counter-claim. A Picture showcasing the product ‘DEFZAKIND’ is extracted below for reference: 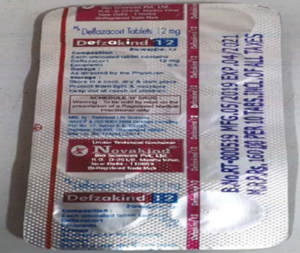 It was submitted was by Plaintiff that the Defendants besides infringement and passing off, is also defrauding the public by representing their trademarks as registered, whereas they are either abandoned or registration is still in process.

Plaintiff also brought to the notice of the Hon’ble Court that as per the master data records of Registrar of Companies, the Defendant’s registered office is in Lucknow, Uttar Pradesh, whereas, it is mentioning an address of Madhu Vihar, New Delhi as its registered office on the packaging of medicine, which amounts to misrepresentation, probably so to avoid or to evade any coercive action.

The Hon’ble Delhi Court after hearing the submissions of the Plaintiff made the following observations:

The Hon’ble Delhi High Court while granting an ex-parte ad-interim injunction in favour of the Plaintiff, issued notice to the injunction application to the Defendants and granted two weeks’ time to file reply thereof.

Plaintiff’s request was appointment of local Commissioner for search and seizure was not allowed given the existing lockdown restrictions, however, liberty is granted to the Plaintiff to move the court to take up the said application at appropriate stage and it will be decided on merits of the case.