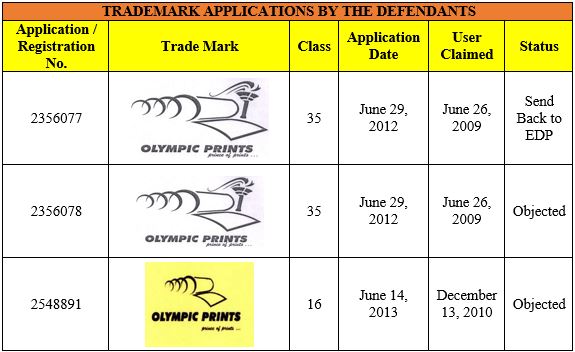 Contentions of the Defendants

Order of the Court and its Implications

The Hon’ble Court further held that the word OLYMPIC is a registered trademark of the Plaintiffs therefore, cannot be used by any other person and if there is any such use, certainly, it would amount to infringement of the said registered word mark.

The Court held that the Plaintiffs have established a strong prima facie case in their favour by showing that they are in the trade using the trade mark for more than 50 years and are doing good business running to several crores every year. The court further held that if no injunction is granted, it would certainly cause irreparable injury to the Plaintiffs as their registered trademarks are being used by the Defendants which would be construed as though the Defendants’ trademark is that of the Plaintiffs’.

The aforesaid ruling calls for a debate whether exclusive trademarks rights over Olympic marks such as OLYMPIC, DEVICE OF TORCH etc. can be granted to traders in India.

It is further interesting to note that many countries have adopted permanent national legislation for protecting the Olympic properties, such as China’s legislation titled “Regulations on the Protection of Olympic Symbols of the People’s Republic of China” and the United States of America’s legislation titled the “Olympic and Amateur Sports Act” giving special protection to Olympic marks. The Olympic and Amateur Sports Act basically says that without the consent of the United States Olympic Committee (USOC) or IOC, any person who uses, for the purpose of trade to induce the sale of any goods or services or promote any theatrical exhibition, athletic performance or competition, using either the symbol of the IOC (which is the 5 interlocking rings) or any trademark, trade name, etc. that represents association with or authorization by the IOC or the USOC is subject to a civil suit.

Some countries are also signatories to the Nairobi Treaty on the Protection of the Olympic Symbol (1981) which is administered by the World Intellectual Property Organization (WIPO) and is open to any state that is a member of that organization, the United Nations or any of its specialized agencies, or the Paris Convention. According to WIPO, 51 countries are contracting members. States that have signed the Treaty are obliged to refuse or invalidate the registration as a mark and to prohibit the use for commercial purposes of any sign consisting of or containing the mark, except with the IOC’s authorization. India signed the Nairobi Treaty on June 30, 1983 and ratified the same on September 19, 1983.

Pertinently, Item 21 of the Schedule of The Emblems and Names (Prevention of Improper Use) Act, 1950 in India, as amended on August 18, 1978, prohibits the use of the name and emblem of the International Olympic Committee consisting of five inter-laced rings for professional and commercial purposes such as in a trademark.

The aforesaid Order dated September 11, 2015 can be accessed here.