US: Citigroup sued AT&T for infringing its Trade mark ‘Thank You’

As the saying goes, it costs nothing to say thank you, but not in the case of telecom company AT&T Inc. who was sued by US Bank, Citi group for trade mark infringement of the word ‘thank you’.
On June 10, 2016, Citigroup filed a case against AT&T, in U.S District Court (for the Southern District of New York), for infringing its trade mark ‘Thankyou’. According to Citigroup, AT&T’s new loyalty program, namely ‘AT&T Thanks’, is likely to cause confusion among customers. Suit filed by the Citigroup states that, the design also has similar font and word placement. Citigroup also alleged that, AT&T was aware of Citi’s trade mark, as AT&T are its technology partner for a long time, and hence there is a willful trade mark infringement by them. Citigroup in its suit demanded, inter-alia permanent injunction, restraining AT&T from using ‘Thanks, Thank you, etc.’ for commercial purpose.
Citigroup contended that, it has been using ‘Thankyou’ since 2004, in promoting its own customer loyalty and reward programs, including credit cards co-branded with AT&T. Citigroup has also registered ‘Thankyou’, as a trade mark, in USPTO. AT&T has also filed an application, in USPTO, for registration of trade mark ‘AT&T Thanks’. Some other companies has also registered ‘Thankyou’ as a trade mark, for various goods. Details of these trademarks applications is as follows; 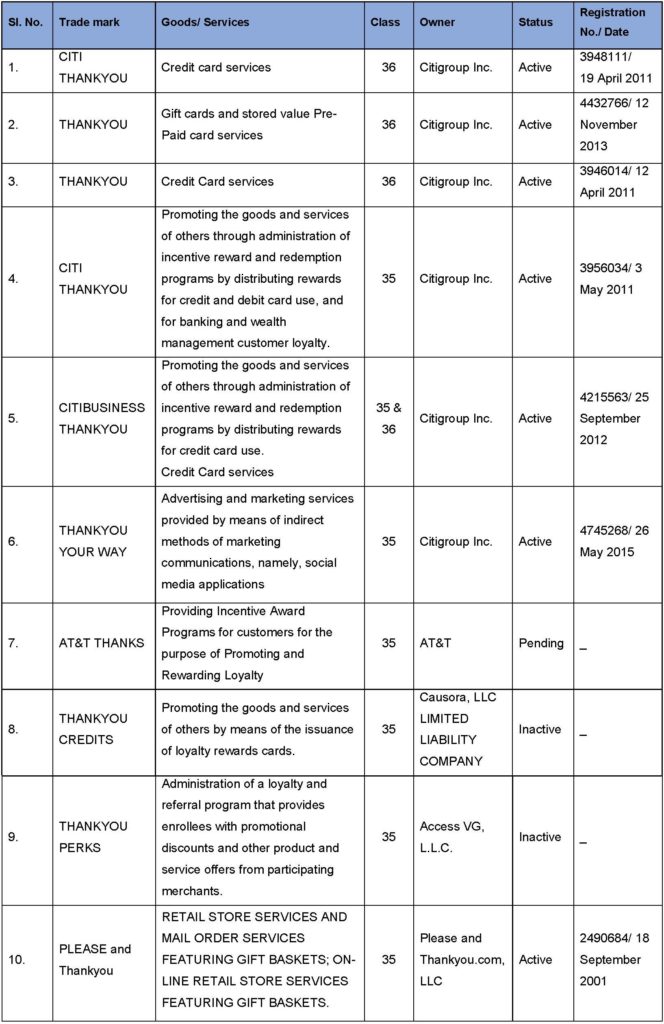 The present trade mark infringement suit, filed by Citigroup, may affect the relationship between these two companies, which Citigroup said dates to at least 1998 when they launched the AT&T Universal Card.

The Citigroup’s Trade mark ‘Thankyou’, may be contended as a generic name and may be liable for cancelation under section 14(3) of U.S. Trade mark Law which states that;

A petition to cancel a registration of a mark, stating the grounds relied upon, may, upon payment of the prescribed fee, be filed as follows by any person who believes that he is or will be damaged, including as a result of a likelihood of dilution by blurring or dilution by tarnishment under section 1125(c) of this title, by the registration of a mark on the principal register established by this chapter, or under the Act of March 3, 1881, or the Act of February 20, 1905:

AT&T has not yet filed any statement in the court. It will really be interesting to see further developments in this case.