The World Intellectual Property Organization Convention came into force on April 26, 1970 and in the year 2000, WIPO’s member States designated April 26 as World Intellectual Property Day with the aim to learn about the role that IP rights play in encouraging innovation and creativity. This year on April 26, Francis Gurry, Director General of WIPO called for a ‘green-tech innovation surge’ in order to fight climate change.

As per WIPO, Patent system fosters innovation and the development and diffusion of eco-friendly technologies that enable to tackle the climate crisis and build a green future. This year, WIPO released agency findings1 from a survey of international patent filings which covered four areas of green energy technologies that are:

Figures as released in this survey which were measured by number of international patent applications, depicted that innovation in environmentally friendly technologies has seen stagnated growth over years.

The findings as released by WIPO on its official website in the form of a graph is shown below2. 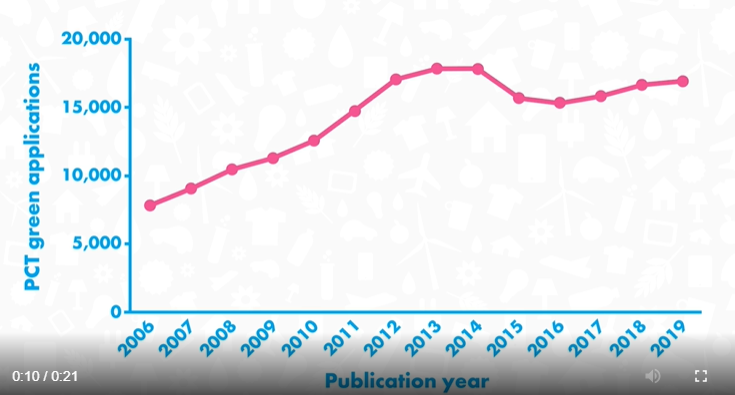 This report shows that there has been only a slight increase in patent application filings for green energy technologies in the recent years.  In view thereof, WIPO demanded for a collective push to help increase activity of innovation of green technologies.

Green technology has recently become ever more popular. Like the “green” means in its name, green technology has a sustainability responsibility. And the portion of technology, well, that’s pretty large in nature. Ultimately, green tech focuses on sustainable innovation which factors have environmental consequences in the short and long term.

WIPO has taken a range of initiatives related to intellectual property and sustainability, including how trademarks can promote sustainability, design rights and sustainability, the search for eco-friendly materials in the automobile industry and how it is helping in providing an understanding of the global shift towards green energy and resulting inclination to explore such fields by Indian and foreign players alike. The WIPO 2020 initiative also, places creativity and IP rights at the centre of efforts to build a green future.