WIPO: Trademark is used more than Patents in developing countries

World Intellectual Property Organization (hereinafter referred to as ‘WIPO’) through its research and an analytical analysis of available data regarding intellectual property has shown that
trademarks are used more widely than patents in developing countries.

Recently, WIPO prepared a new comprehensive dataset for Chile, through a research paper titled ‘Intellectual property use in middle income countries: the case of Chile’. The paper combined detailed firm-level information. It analyzed the use of IP by firms in Chile and its effect on outcomes, including growth and productivity. The results showed that Chilean firms relied much more on the use of trademarks than patents or industrial designs.

In another study, titled ‘WIPO-ASEAN Study: The Strategic Use of Intellectual Property to Enhance Competitiveness in Select Industries in ASEAN’ it was found that trademarks received the highest importance rating for firms from almost all countries except few like Indonesia, Singapore, where firms considered patents the most important means to protect their IP.
In Malaysia and India, trademarks led by a wide margin as the most important type of IP, whereas in Brunei, Cambodia, Laos and Myanmar the difference was not large. 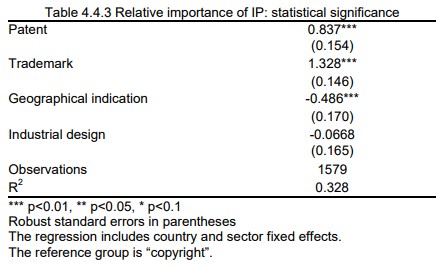 The results in the above table confirmed that trademark was the most important means of IP protection for the firms and produce a clear ranking of the relative importance of the five types of IP: trademark was followed by patent with geographical indication being third. Copyright and industrial design were considered to be the least important among the five. [1]

The said study also reported the importance scores of the IP by industry. This is given on Table 4.4.2 on Page Number 29 of THE WIPO-ASEAN STUDY. Trademark was considered the most important IP by firms from all industries except the ICT and food industries. The ICT firms were from Republic of Korea, Laos and Singapore and patent was regarded as the most important form of protection. In the pharmaceutical industry, patents and trademarks were both highly valued. Again, copyright and GI received the lowest importance ratings.