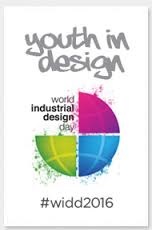 This year’s theme for World Industrial Design Day, 2016 was ‘Youth in Design’, which highlights the role of young designers in the development of Industrial Design. ICSID’s officials interact with young designers, discussing their problems and their goals. For the occasion, ICSID has published an Op-Ed addressing the shift in the industry with young industrial designers at the helm, called Youth and Design – A Powerful Combination.

The main objectives of World Industrial Design Day 2016, were-

For the celebration of World Industrial Design Day 2016, many events were organized by ICSID members and the wider design community in more than 20 countries around the world, including World Design Capital cities, Taipei, Mexico City, and Seoul. Support for Design profession was also shown on social media. Canadian Government had organized, live Question and Answer session with an industrial design examiner from the Canadian Intellectual Property Office. IDSA (Industrial Designers Society of America) Professional, Student and International members, Board members, and Ambassadors posted how they celebrated the occasion, with events ranging from a cookout at Auburn University to parties at design studios across the globe, embracing design in all forms.

World Design Capital (WDC) is designated by ICSID every two years to recognize a city’s innovative use of design for economic, social and cultural development and to showcase effective design-led urban revitalization strategies that other cities can benefit from. Past cities to hold the WDC title include Torino (Italy) in 2008, Seoul (South Korea) in 2010, Helsinki (Finland) in 2012, and Cape Town (South Africa) 2014. Taipei (Taiwan) is this year’s WDC, and Mexico City has just been named WDC 2018.