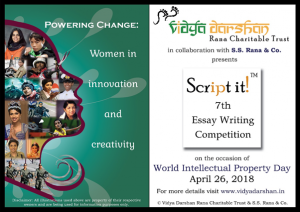 On this World Intellectual Property Day, Vidya Darshan Rana Charitable Trust in collaboration with S.S. Rana & Co., is pleased to announce the conclusion of the Seventh All-India Essay Writing Competition.

We are extremely delighted to receive such an overwhelming response from students of various colleges from all over India who participated in the said essay completion based on the World IP Day theme –
Powering change: Women in innovation and creativity. This year, the underlying idea behind observing the World IP Day is to explore how the world is changing and accepting and empowering more and more women as a part of the world of innovation and creativity. Women have always been played an active role in the field of innovation and creativity. From multiple Nobel Prize-winning scientist Marie Curie, to Stephanie Kwolek, inventor of Kevlar fiber used in bullet-proof vests; from filmmaker and two-time Academy Award winner Sharmeen Obaid-Chinoy, to art legend Frida Kahlo, from Pratibha Ghai, the innovator of “atomic resolution environmental transmission electron microscope (ETEM),” which can perceive chemical reactions at an atomic scale, to Kiran Mazumdar Shaw, the owner of bio-pharma enterprize, Biocoin are all dynamic women contributors in the field of IPR, innovation and creativity.

The Merriam-Webster dictionary has chosen “feminism” as its word of the year, and it has certainly been an extraordinary 12 months for women. Women have done some groundbreaking innovations and have successfully challenged preconceptions and stereotypes and provided inspiration. Their innovations took myriad forms, from the mundane to the seemingly miraculous. 26th April only celebrates the brilliance, ingenuity, curiosity, and courage of women who drive change in our world and shape our common future.

India being a cornucopia of knowledge, capabilities and skill has left no stone unturned in protecting its creativity. In the recent times Indian Judiciary has delivered such judgments in the sphere of Intellectual Property which apart from expanding its scope in India have also been exemplary worldwide. India has taken significant steps to bridge the gender gap in the field of innovation, creativity and IPR. One of the best examples of the efforts taken by Indian Government is the Women Scientist Scheme under Kiran-IPR. The Scheme empowers women who are qualified in science but were not able to pursue a career in science due to domestic and social reasons. The scheme aims to train these women scientists in the area of Intellectual Property Rights (IPR) and their management for a period of one year and eventually develop a pool of women scientists geared up in creating, protecting and managing intellectual property in India.

We however look forward to more such milestones by the Indian Government which strikes a balance between male and female contributors in the field.

In addition, on the occasion of World IP Day Tish Berard, INTA President, states that,
‘Leading by example is a compelling way to demonstrate that women in IP should take more leadership positions and become more involved in their firms and in their specific business domains. Education is equally important, as women should be able to effectively communicate their value to their firms and to others’.

Additionally, we would also like to bring to notice that the total entries we received approximately 60% were submitted by female. Therefore, proving that India is changing, and this year is indeed a year of feminism.

Of the multiple entries received, we have shortlisted the winning entries –

The winners of the Competition are –

Heartiest Congratulations on behalf of S.S. Rana & Co., and Vidya Darshan Rana Charitable Trust to all the winners, with the top three ranked students winning prizes worth INR 7,500, INR 5,000 and INR 2,500 respectively in
college category and worth INR 5,000, INR 2,500 and INR 1,000 in
school category.

The winners in the college category will also get a chance to intern with our firm for a period of one month.

All participants shall receive a participation certificate from the firm.

In a special mention we would like to Thank below mentioned institutes for encouraging such participation from students and would expect the same in the future. The institutes are: