India: A small victory in the worldwide collective war against counterfeiting! – Delhi High Court awards punitive damages to the tune of INR 300,000

Since its founding in 1940, Ahuja Radios has developed into one of India’s leading manufacturer & exporter of Public Address Equipments. Ahuja Radios (hereinafter referred to as the ‘Plaintiffs’) has numerous registrations for “AHUJA” formative trademarks in Class 09- 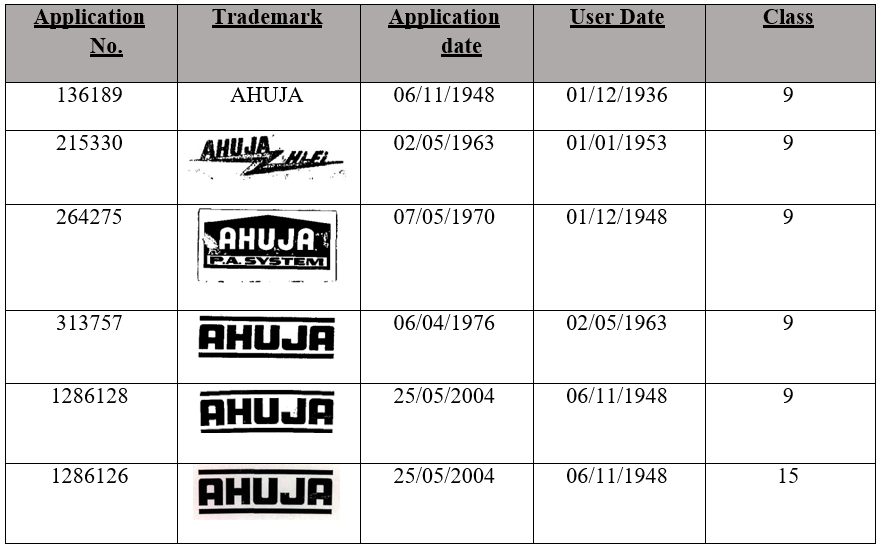 The Plaintiff had stated that it is the largest manufacturer of Public Address Systems (PAS) in India, and that it has been selling PAS equipment under the trade mark AHUJA since 1940. In this regard, it is pertinent to note that the Plaintiff has a registration over the word mark “AHUJA” in Class 09 vide application no. 136189 dated November 06, 1948, claiming use since December 01, 1936. They also stated that their PAS products are exported to over 50 countries. It has also been stated that the Plaintiff’s amplifier model SSB120 is one of their best selling products.

The Plaintiff had conducted a market sweep in Mumbai in August 2014. During the course of investigation/survey, it was discovered that H.K. Sound Electronics (hereinafter referred to as the ‘Defendants’) were selling counterfeit AHUJA PAS products. Thereafter, the investigators procured a counterfeit amplifier from the Defendant, which was under the model number SSB 120 As regarding the counterfeit product, it was noted that –

In view of the aforesaid, the Plaintiff filed a suit for trademark infringement and sought a decree of permanent injunction against the Defendants, delivery of the impugned material and rendition of accounts and damages upto INR 2,005,000.

The Plaintiffs submitted a wide variety of evidence, including but not limited to copies of brochures and internet material in favor of the Plaintiff, catalogues, sales invoices of Plaintiff’s products, copies of trademark registrations, copies of orders passed by various courts in favor of the Plaintiff, affidavit of the investigator, photographs of the Defendant’s premises, photographs of the counterfeit products, Defendant’s business cards, bill of purchase of the counterfeit product, etc.

Even though the Defendants were served, they did not appear. Hence the matter proceeded ex- parte.

The Court decreed the below in favor of the Plaintiff –

As in interesting side note regarding the Court’s judgment, the Court held that the Defendant’s actions amounted to infringement of Ahuja Radio’s trademark registration no. 1495014. However, as per the information available on the Registry’s website, the aforesaid registration for the mark “SSB-120” (the product model) was valid October 09, 2016 and the same does not appear to have been renewed.