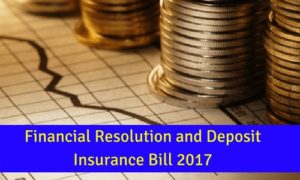 The Financial Resolution and Deposit Insurance Bill, 2017 (hereinafter referred to as ‘FRDI Bill’) was introduced in Lok Sabha in the month of August and has since then gained a lot of popularity over the controversial Bail-in provisions under Section 52 of the FRDI Bill. In commercial parlance, a ‘bail-in’ translates to utilizing the funds of depositors to attain financial stability.

The FRDI Bill is currently undergoing scrutiny by a joint parliamentary committee and the committee is consulting all the stakeholders regarding the provisions of the FRDI Bill.

Speculations have been surfacing that the bail-in clause in the proposed FRDI Bill puts depositors’ money in banks at risk. On December 13, 2017, the Prime Minister, Narendra Modi, while addressing the inaugural session of 90th Annual General Meeting of Federation of Indian Chambers of Commerce & Industry stated that the Government is working to protect the interests of the account holders, but rumors that are being spread are the exact opposite.[1]

The bail-in clause and the resolution of financial service providers:

The FRDI Bill[2] provides for the setting up of a ‘Resolution Corporation’ which would replace the currently existing Deposit Insurance and Credit Guarantee Corporation[3] . This corporation shall be tasked with anticipating the risk of failure of financial firms in advance and taking corrective action and resolving them in case of failure.

Further, Section 52 (1) of the FRDI Bill states that if the resolution corporation is satisfied that it necessary to bail-in a specified financial service provider for absorbing the losses incurred an action then action shall be taken under this section by a bail-in instrument or a scheme.[4] Further, sub-section (5) states that a bail-in provision means a provision cancelling or modifying a liability owed by a specified service provider.[5]

Another important provision to consider in this regard is the sub-section (7) of Section 52 which states that the bail-in instrument or scheme shall not affect any liability owed by a specified service provider to the depositors to the extent such deposits are covered by deposit insurance.[6]

The FRDI bill enables the Resolution Corporation to cancel or modify the liability of a failing financial service provider or convert the nature of its liability. Thus, in this regard, it becomes important to note the object of FRDI Bill which includes protection of consumers of specified service providers and of public funds for ensuring the stability and resilience of the financial system and for connected matters.

However, government assurances through press releases have not been enough to clarify all the concerns. The Associated Chambers of Commerce & Industry of India (hereinafter referred to as ‘ASSOCHAM’ released a statement[8] dated December 14, 2017 wherein it was stated that the concept of ‘bail in’ especially by depositors should be completely done away with and their monies in the banks have to be protected at any cost otherwise, the trust in the banking system runs the risk of being eroded and the savings by the households would find way into unproductive avenues like real estate, gold, jewellery and even in the unorganised and informal financial markets run by unscrupulous people.

The Ministry of Finance has claimed that the FRDI Bill will strengthen the financial system by adding a comprehensive resolution regime that will help ensure that, in the rare event of failure of a financial service provider, there is a system of quick, orderly and efficient resolution in favor of depositors. However, concerns are still prevalent and the bail-in provision is still being criticized by experts. The protection of consumer interests as stated in the objects of the FRDI bill should be of paramount importance and if needed, the legislation when finalized should, if needed, amend the language of the provision to remove ambiguity and make abundantly clear that the depositors’ money is not arbitrarily used.

[3]Established under Section 3 of The Deposit Insurance and Credit Guarantee Corporation Act, 1961, Available at: https://rbidocs.rbi.org.in/rdocs/Publications/PDFs/dicgc_act.pdf.

[7]Press release by the Ministry of Finance, dated December 7, 2017. Available at: http://pib.nic.in/newsite/PrintRelease.aspx?relid=174162.