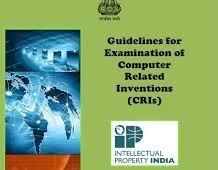 The journey pertaining to Guidelines for Examination of Computer Related Inventions (herein CRI) has been both time-consuming as well as riddled with lot of amendments. In light of several remarks and comments from numerous stakeholder’s and further sessions with the Indian Patent Office, revised guidelines pertaining to examination of CRIs has been published on the 30th of June, 2017 which are breather after a long dry spell.

Item 1.3 of the amended guidelines states:

“The objective is to bring out clarity in terms of exclusions under
Section 3(k) to allow eligible applications of patents relating to CRIs be examined speedily”.

The major highlight in the guidelines is deletion of the concept of “novel hardware”.

Summarized below are several revisions executed by the Indian Patent Office for Computer Related Inventions in several categories.

The rules comments on certain provisions of Section 3(k) and clarify the following;

Mathematical Method: The rules read that the mere presence of a mathematical formula in a claim, to clearly specify the scope of protection being sought in an invention, may not necessarily render it to be a “mathematical method” claim.

Business Method: Herein in relation to business methods, there is a significant improvement, wherein it is stated that mere presence of the words such as“enterprise”, “business”, “business rules”, “supply-chain”, “order”, “sales”, “transactions”, “commerce”, “payment” etc. in the claims may not lead to conclusion of an invention being just a “Business Method”.

Algorithm and Computer Programme per se: Computer programs are claimed in the form of algorithms as method claims or system claims with some “means” indicating the functions of flow charts or process steps. While establishing patentability, the focus should be on the underlying substance of the invention and not on the particular form in which it is claimed.

However, it has been clarified that if in substance, the claim, taken as whole, does not fall in any of the aforesaid excluded categories, the patent should not be denied.

Further, the exclusion of computer programs should not be avoided merely by camouflaging the substance of the claim by its wordings.