The ‘Nation wants to know’ if Arnab can use the phrase!! 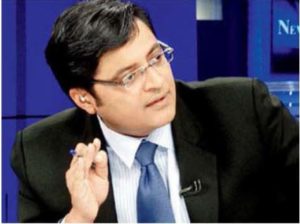 Fresh after putting to bed the wrangle surrounding the name of his new venture, Arnab Goswami has somehow landed up in a brand-new controversy, when in the early hours of April 18, 2017, it was reported in most media outlets that a ‘top media house’ has sent Arnab a legal notice related to the use of the phrase, ‘Nation Wants to Know’. When Mr. Goswami was with Times Now, in the primetime segment ‘The Newshour’, he made the phrase extremely popular, repeatedly juxtaposing the use of it between heated discussions among his various panelists, so much so that he became synonymous with the use of this phrase.

However, Mr. Goswami remains undeterred from the legal threat claiming he is ready for the challenge, as can be understood from an audio message that he uploaded on YouTube. In it, he states,

“The threat of imprisonment will not deter me. Bring your moneybags and your lawyers, file the criminal case against me for using the phrase ‘Nation wants to Know’. Do everything you can, spend all the money you have and arrest me. I am waiting right now in my studio. Come, enforce your threat.”

He further went on to say that the phrase belongs to every citizen in the country. While it might sound a little hyperbolic, he stated, ‘Every Indian has a right to use the phrase. And this phrase come from the heart.
Every Indian, through his or her questioning spirit, can use the phrase.’

Nonetheless, Mr. Goswami has found some much needed support from the journalistic fraternity, as Barkha Dutt, known mostly for being at loggerheads with Arnab, tweeted from her official twitter handle,
“Don’t often agree with Arnab, but this is insane. So unfair how all media owners’ force-own copyright of shows created & nurtured by individuals.”

Even though the media house in question is not named by Mr. Goswami in the video, a simple Trademark Search on the IPIndia Website indicates that Bennet Coleman and Company, the media conglomerate that owns the channel, Times Now had already filed application for the trademark over the phrase, back in December 2016, probably in anticipation of Mr. Goswami starting his own venture. Mr. Goswami and his company, ARG Outliers Private Limited also filed for an application in January 2017, even though it is curious as to why he has filed a trademark application for the phrase at all, especially in light of the fact that in the above referred public video, he said that the phrase belongs to each and every Indian citizen and no one can own it!!

Even though Times Now filed for a trademark application in December 17, 2017, almost a month before Arnab did, they did so on a proposed to use basis, whereas Arnab has claimed use in his application since November 20, 2016. Another point to be noted from this controversy is the astonishingly high number of Trademark applications filed by ARG Outliers, even though it is yet to officially launch the channel. Such a move by the company is a smart one as it will help in avoiding such controversies in the future (or perhaps help in creating more!). A list of marks filed for by the company are listed below – 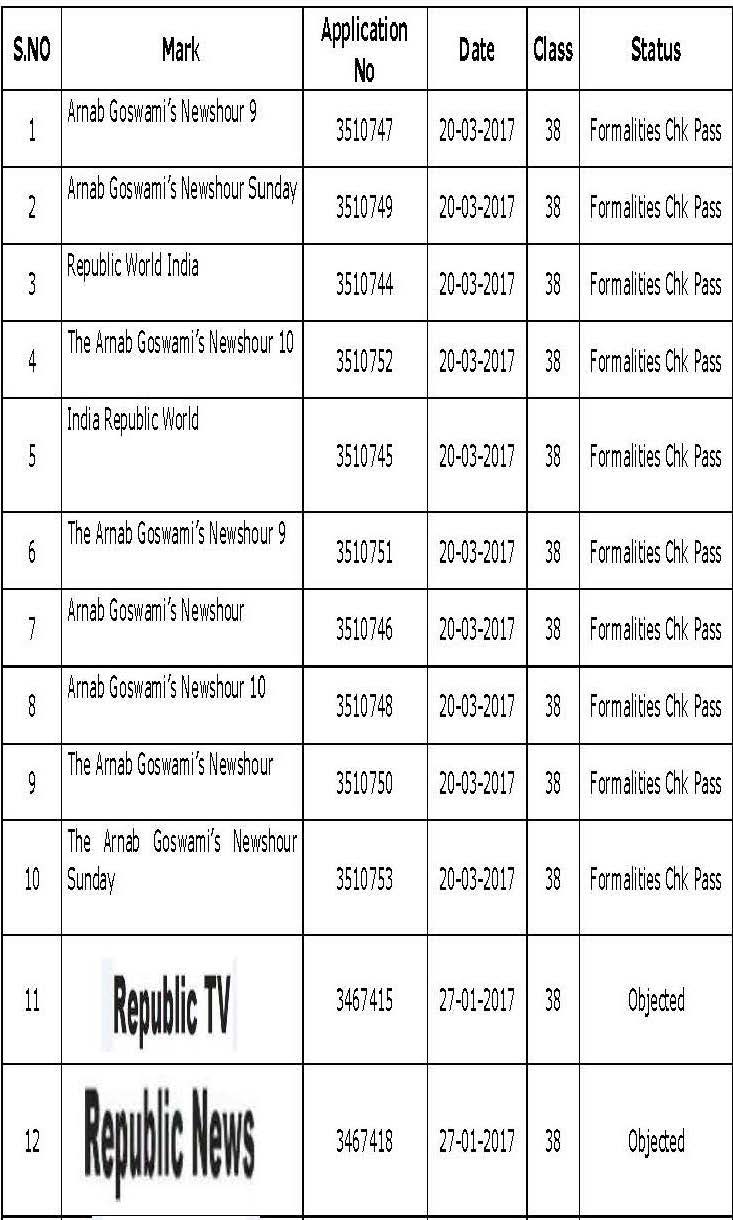 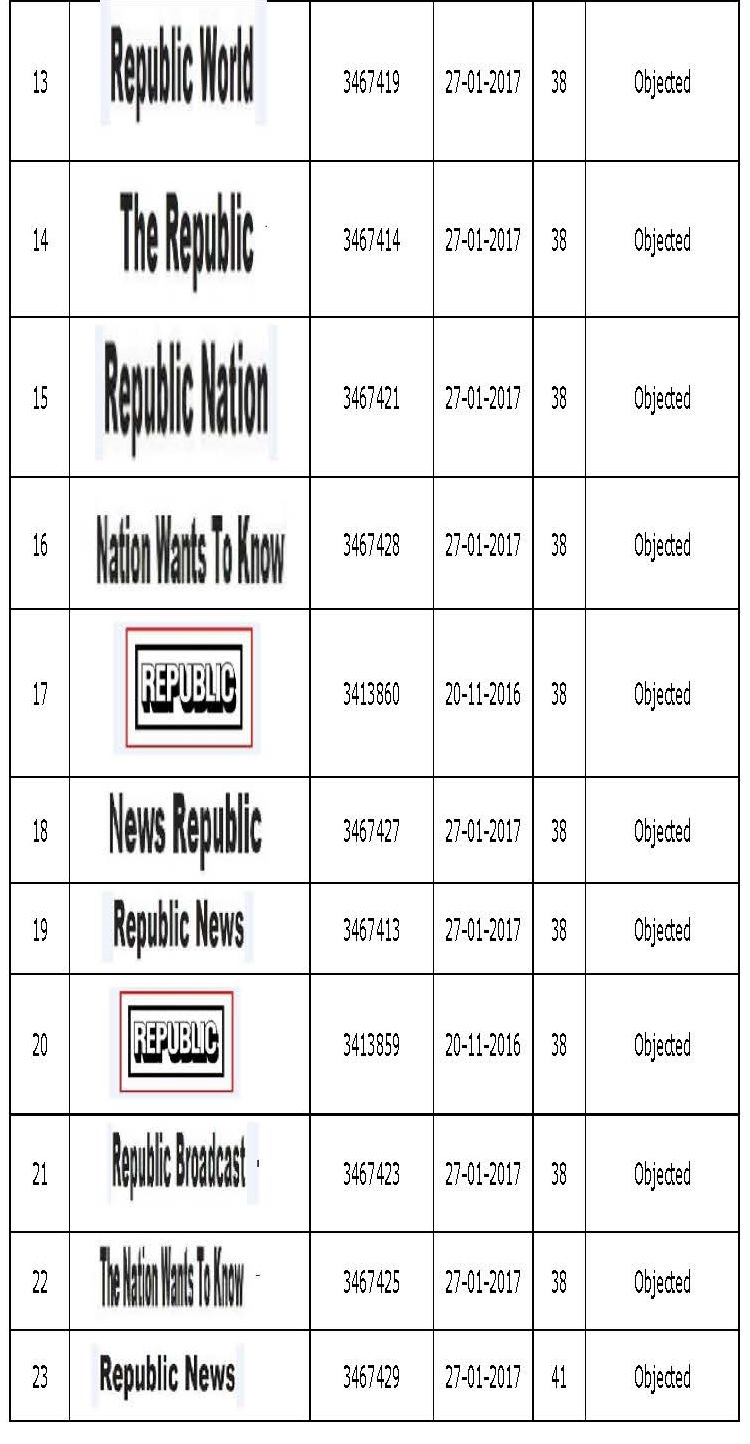 This new controversy surrounding Arnab’s use of the phrase is not a new one in the Indian media and entertainment industry. A controversy of a similar nature with even more publicity was also witnessed by the Indian audience, when Sunil Grover, the ace comedian who won millions of hearts with his stint on Comedy Nights With Kapiland The Kapil Sharma Show, suddenly left comedy nights and revamped his much-loved character of Gutthi as Chutki for a new comedy show, in a different channel, Mad in India.

Sunil’s Chutki act landed him in deep trouble as Viacom 18 (co-producers of ‘Comedy Nights With Kapil’) soon slapped a legal notice on him. However, the controversy was put to bed when Kapil’s show started witnessing a dip in TRP’s, which critics said was because of the outcome of Sunil’s exit, and after discussions, Sunil returned to Kapil’s show, this time in a new character, playing Kapil’s father-in-law.

While everything seems hunky dory between the two now, these instances are a microcosm of contemporary employer-employee relationship. With reference to the recent Arnab Goswami incident, Times Now, can easily claim that its contracts with its employees contains a clause that all intellectual property created during the course of employment would vest with the company itself. In fact, such terms in employment contracts are not very uncommon, and it is natural for the employers to include such clauses into contracts to protect their interests. In such a scenario, even though the phrase was given a soul by Arnab Goswami, it is Times Now who owns it.

However, it is not entirely a dark tunnel for Arnab. As correctly pointed out by FirstPost in their article, ‘Arnab Goswami vs Times Now: Nation wants to know

whether you can own catchphrases? You can’t.’ published on April 21, 2017, a copy of which can be found overhere, a possible line of argument which Goswami could take is that the phrase is a part of Goswami’s Image/Publicity rights. For instance, Goswami could argue that the public associates ‘Nation Wants to Know’ not with brand Times Now but with brand Arnab Goswami, and that use of the phrase by anyone other than Arnab Goswami violates Goswami’s image rights. In order to successfully claim image rights over the phrase, Goswami would have to prove that the phrase, ‘Nation Wants to Know’, is an aspect of his personality

Generally publicity and celebrity rights are analogous to a celebrity. They generate economic value – be it news stories and gossip items about celebrities’ personal and professional lives, or the lucrative market for celebrity merchandise and endorsements. But, the only problem with this line of argument is that the Indian legal system is not yet well developed to deal with the modern phenomenon of publicity and image rights, especially in light of the fact that there is no codified law to that end, and the increasing use of the internet for communication and advertising means that any misuse can proliferate quickly. No specific provision in the Indian Trademarks Act, 1999, or the Copyright Act, 1956, expressly addresses publicity and image rights. Nonetheless, the Copyright Act, 1957, defines ‘performer’ in Section 2 (qq), which includes an actor, singer, musician, dancer, acrobat, juggler, snake charmer, lecturer or any person who gives a performance. There is little clarity as to what aspects of an individual’s publicity and image rights may be protected under copyright law. Thus, protection is provided for specific works only, and a celebrity might not be able to exercise a general right to his image.

It will be interesting to note further developments in this controversy, and if Mr. Goswami and Times Now is not able to settle it amicably like Kapil Sharma and Sunil Grover did in their initial dispute, then it will truly be a landmark legal battle which might conclude with the judiciary stressing the need for a separate law addressing the issue of Image Rights.