A Five-Judge Constitutional Bench of the Supreme Court in a landmark verdict has turned down the law passed in 2014 for setting up of the National Judicial Appointment Commission (NJAC) for the appointment of Judges in the higher Judiciary. The Apex Court in the judgment has also directed restoration of the collegium system and ordered its revival.

Indian Daily, The Indian Express in the said context reports that the Apex Court held the 99th Amendment in the Constitution and the consequent NJAC Act as bad in law. The petition challenging the NJAC Act had been filed by the Supreme Courts Advocate on Record Association (SCAORA) alleging that the said law on appointment of judges was unconstitutional and was aimed at hurting the independence of Judiciary. The Centre on the other hand defended the law by contending that earlier collegium system wherein judges appointed judges was not free from defects.

What is 99th Amendment in the Constitution and NJAC Act all about?

The Ninety Ninth Amendment Act, 2014 amends Article 124 of the Constitution which deals with the Establishment and Constitution of Supreme Court. As per the amendment the words “after consultation with such of the Judges of the Supreme Court and of the High Courts in the States as the President may deem necessary for the purpose” in Article 124(2) would be substituted by the words “on the recommendation of the National Judicial Appointments Commission
referred to in Article 124A”. 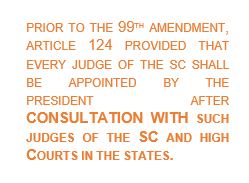 Further, NJAC was constituted vide the said amendment under Article 124A and provided that the said Commission would consist of six members namely, the Chief Justice of India, two other Senior Judges of the Supreme Court, the Union Minister of Law and Justice and two eminent persons to be nominated by the Committee consisting of the Prime Minister, the Chief Justice of India and the Leader of Opposition.

Reportedly, the NJAC Act was mainly condemned on the grounds that it encroached upon the independence of Judiciary which is the basic structure of Indian Constitution.

What does the collegium system for appointment of judges imply?

The collegium system for appointment of judges does not have any constitutional basis but has evolved from Three Judges Cases namely,S.P. Gupta v. Union of India (1981), Supreme Court Association of Advocate on Record v. Union of India (1993)
and In re Special Reference 1 of 1998). The said system restores judicial independence and eliminates the say of Legislature and Executive in the appointment of judges. The collegium consists of the Chief Justice of India and four senior-most judges of the Apex Court.

Independence of Judiciary and Separation of Powers between the Legislature, Executive and Judiciary has always been a contentious issue in India and this time again any invasion on judicial independence has been negated by the Apex Court.