Growth of Copyright in India and Learnings from Developed Economies

By Lucy Rana and Shubhankar Shashikant

In view of the Global IP Index 2019, a fair need for the analysis of the Indian IP sector has unfolded itself. As there is a conflict between territorial nature of intellectual property (IP) and the need of IP for the growth of global economy in the era of globalization of trade, a rectification of the traditional notions which continue to delimit territorial jurisdictions at play is imminent.

The conflict between the requirements of a global economy and the territorial nature of intellectual property rights is characteristic of the effect globalization exercises on the territorial limitations prescribed by IP. However, this issue is not restricted to IP only and is faced by many geographically limiting areas of trade and laws.

In India alone, IP has seen drastic growth in the last decade which can be traced to both- a gradual increase in awareness on IP laws (Trademarks, Patents and Copyright etc.) for industry growth as well as imitation of foreign IP intensive companies entering the Indian markets which provide for a fierce competition to their Indian counterparts. In the Global IP index that charts the growth of IP industry in 50 global economies, India has jumped 8 places to stand at the 36th position on the list. The index is charted by The U.S. Chamber of Commerce’s Global Innovation Policy Center (GIPC).[1] The jump is the highest gain any country on the list made for the year 2019 and is owed to India recognizing the International Standards of Copyright Protection and the incentivizing of Intellectual Property. 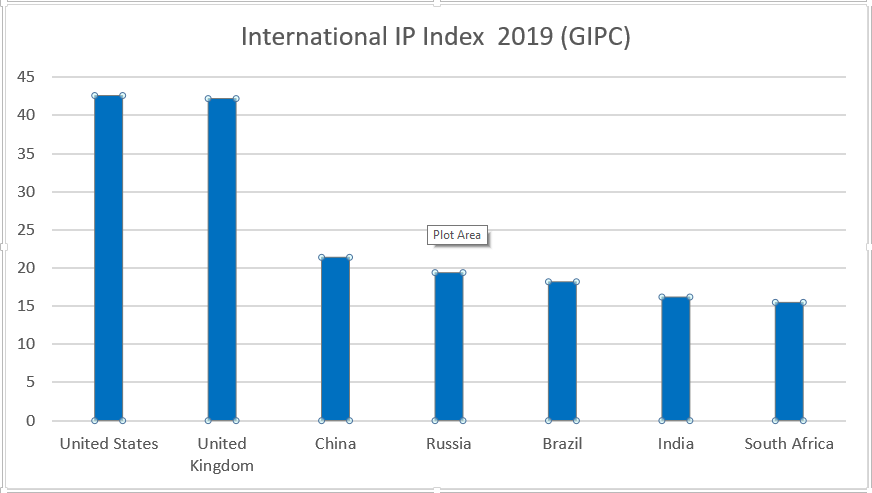 However, even with the jump, there are several aspects that require attention by IP authorities in India to come up with policies that can enhance the growth further. The reason for the immediate requirement of the same is the sheer potential of the IP industry to generate profits and add to the GDP significantly. For this purpose, India does not have to reinvent the wheel as there are countries such as Australia and USA which provide for compelling evidence towards the need of harnessing the potential of the IP intensive markets. One such industry is the copyright-intensive industry, which alone is contributing considerably to global economies, even outperforming industries such as health-care and banking- finance by a huge margin.

Copyright Intensive Industries and Economical Impact (Australia and the US):

To formulate the proper and accurate range of profit by the copyright intensive industries, it is divided into 4 major sectors as is also reflected in the WIPO framework of the industry to understand its economic impact. The four sectors are; 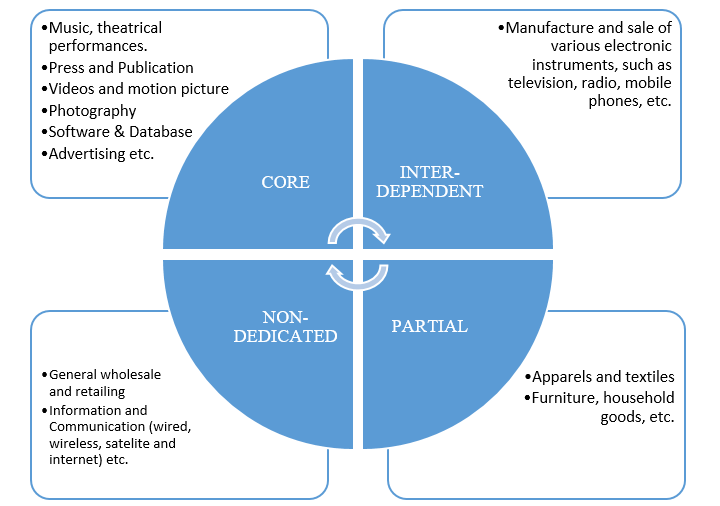 In Australia, copyright intensive industries in the year 2016 contributed a whopping 122.8 billion dollars to the Australian Economy which roughly was equal to 7.4% of the total economic output. This figure is also staggering considering that just 5 years prior to 2016, in 2011 the same industry contributed only 8.5 billion dollar to the economy.

The industry showed more economic growth than the manufacturing, health care and mining sectors when considering the size and continuing growth of the industries and calculating the value added. This is despite the copyright industry having a low total growth from 2011 compared to the other sectors. In Australia, the copyright industry went from being the 7th largest industry, as per a 2011 analysis, to the 3rd largest industry in the year 2016.

Even with such impressive economic performance Australia was ranked 8th on the Global IP index for the year 2016. This year (2019) it ranked at 14th place, which only goes to show that the potential of IP industry is a gold mine for economic profit and needs to be tapped into and given immediate attention.

Although, to put the economic performance of copyright intensive industries of Australia in perspective, an analysis of the US copyright intensive market is a must. In the year 2011 the size of the US copyright industry (all inclusive) was big enough to leave an economic impact of $1769.9 billion dollars ($1.77 trillion dollars) which was equal to 11.5% of the total GDP of US that year. This figure is 200 times more than the impact Australian copyright industries had in that same year.

The size of the copyright industry output grew further in the US to stand at a value of 1.92 trillion dollar in the year 2013 of which 58% was contributed by the core copyright industry alone. Core industries are the industries whose primary concern is creation, production, distribution or exhibition of copyright materials, such as newspapers, books, movies, music, radio and television and online broadcasting, and software (including video games). 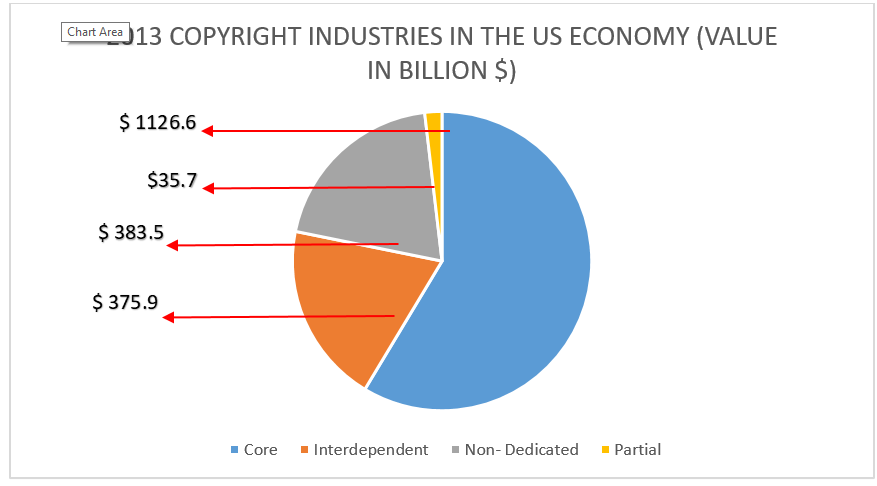 The above data is an overwhelming evidence of the economic potential copyright industries hold. The 2013 economic output of the copyright industries in the US is equal to 11.4% of the total GDP for that year. This points towards the importance of copyright and its exploitation and proves that not developing the same would be a big mistake for a nation in terms of both development and economy.

India, although it jumped 8 places in the global IP index rankings, is still one of lowest performing countries on the 50 countries list and is also 4th on the list of the BRICS countries, in terms of its IP performance and economic output through IP.

In the year 2016-17, the annual IP report, reported a total disposal figure of 5,444 for Copyright registrations whereas the same figure for the following year jumped to 39,799, of which the figure for ROC generated was 3596 and 19997 respectively. These figures show a contrasting reliance that is building up in the creative community for protecting their copyright.

The copyright intensive industries in India are predominantly the media-entertainment industry and the publishing industry that provide greatly towards the economic growth of the country. Sectors such as software and IT also have started heavily to rely upon copyright registration for the protection of their codes and expressions.

Javed Akhtar, the award-winning lyricist and screenwriter of India has been on the forefront of protecting IP interests of creators and has many a times compared the Indian creative economy to the USA citing the obvious growth that we as a nation have not tapped into even with the strong cultural products (film and music) that are consumed globally. He also urges there to be a strong framework for the creative industry.

Even though copyright is considered not to be territorially limited, it still is governed by geographic limits, for example the geo-tracking feature of Netflix which removes and renews all data when a user travels to another country, providing for only content that is accessible at the place of using the account. This limitation hinders consumer satisfaction and signals towards the territorial restriction over copyrighted content. This restriction as well as the many contractual limits put upon the content during the licensing or assignment of copyright, makes copyright function in territorial bounds in spite of the Berne Convention stipulating otherwise. This is done in an attempt to border around the use of copyright so as to keep economic jurisdictions separate to maximize profitability. For example, A broadcasting company ABC in India licenses its copyright in a cinematographic film to a broadcasting company XYZ in France, then it would be viable for ABC’s profit to restrict the broadcasting rights of XYZ over the film to just the country of France so that  XYZ does not broadcast the film in India or in any other country in which ABC can further license the rights to.

The Copyright intensive industries in India can tap into multiple economic profitability scope, the most relevant of them is through licensing. Licensing of copyright can garner long-term and consistent royalties which can help support and expand a venture.

The royalty based industry in the year 2015 had reached an economic output of $ 5 billion dollar which further substantiates the effect of indulgence in IP licensing, especially for copyright as is depicted by the global economic impact of the copyright intensive industries in Australia and the US.

In a world that is seeing trends in economic capacity of the copyright industries flourish to an extent of double digit (in %) contribution to a country’s GDP, India stands at the other end of the spectrum which is experiencing stagnation and isn’t able to incentivize the IP industry to use it to its full potential. The economic proof provided by the study of various economies with respect to copyright intensive industries is hard hitting as India has an array of developed sectors in the copyright intensive market however, is still not able to maximize its output and is succumbing to economic drain. The territorial aspect of copyright should also not be a hindrance for the industry as the current era is filled with opportunities to surpass territorial reach or to use it to the copyright holder’s advantage, such as the use of content in the online environment, the licensing-assignment of copyright and the international treaties that makes it easy for content circulation and access.

Copyright intensive industries have the potential to change the way IP is looked at in India from a business point of view, and get thoroughly utilized to enhance economic output as well as create a niche industry that can add to the GDP of the nation and compete with the global markets already waiting to be exploited.