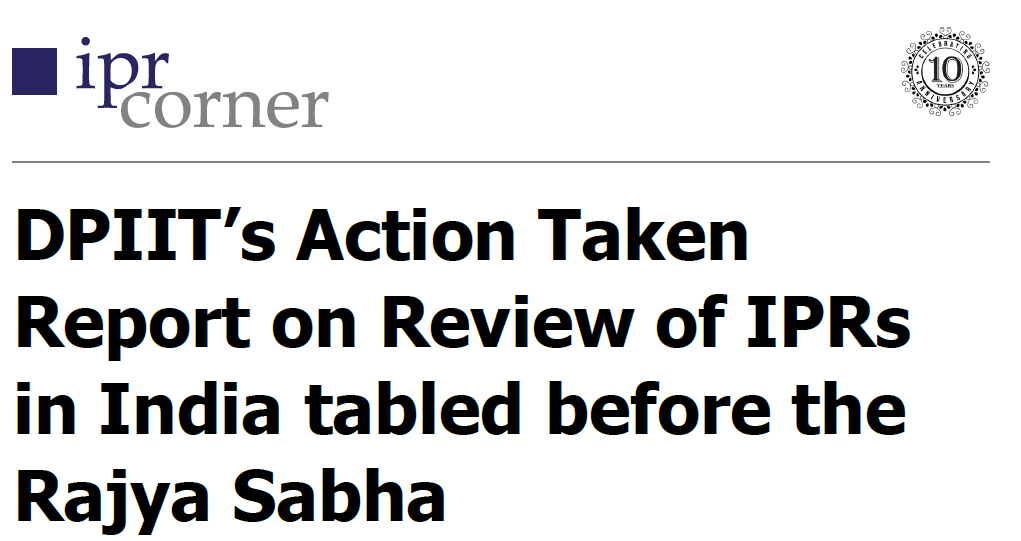 The “Action Taken by Government on the Recommendations/ Observations of the Committee contained in its One Hundred and Sixty First Report on ‘Review of the Intellectual Property Rights Regime in India’” was presented to the Rajya Sabha and laid on the table of Lok Sabha on April 6th, 2022.

The Report, running over 150 pages, inter alia suggested a major revamp of the IPR landscape in India while taking note of the reduced number of IP filings in the country in 2019 as compared to its foreign counterparts. The Report emphasized inter alia on the need of IPR awareness in the country, amendments in the IPR laws, active involvement of the State Governments, specific legislation to deal with the menace of counterfeiting and piracy etc.

The details of Review of the Intellectual Property Rights Regime in India (Report no. 161) can be read here.

In view of the recommendations and observations made in the Review of the Intellectual Property Rights Regime in India (Report no. 161), the Action taken Report has been received from the DPIIT (Department for Promotion of Industry and Internal Trade), which has now been tabled before the Rajya Sabha.

Herein, we present a comparative analysis of the recommendations and observations made by the Department Related Parliamentary Standing Committee on Commerce and the subsequent action taken by the DPIIT are enumerated as under:

While the Committee accepted the Actions reported to be taken with respect to the recommendations/ observations made aforesaid, there were certain parameters for which the Committee does not wish to pursue the recommendations/ observations in view of Department’s reply, like National IPR Policy. With respect to the IPR Policy, the Committee had recommended its review should be undertaken and that its re-assessment was imperative in view of emerging trends in spheres of innovation and research that which require concrete

mechanisms to protect them as IPRs.

The Department apart from the aforesaid parameters has also rendered its Action taken report with respect to Traditional Knowledge, IPRs in Agriculture etc. As mentioned earlier, the Department Related to Parliamentary Standing Committee on Commerce has considered the draft Report and adopted the same on April 5, 2022.

The recommendations of the Committee and the Action taken report of the DPIIT, if implemented in true spirit will make India’s IPR regime a robust one as it not only caters to commercial and economic concerns but also takes heed of the interests of the public at large.

This article was first published on Lex Witness.