External Commercial Borrowing (ECB), as the expression hints, is the loan/ debt/ borrowings taken by an eligible entity in India for commercial purpose, externally i.e. from any recognized entity outside India. However, these borrowings taken must confirm with norms of the Reserve Bank of India (RBI). The ECBs are governed by the regulations of RBI under Master Direction – External Commercial Borrowings, Trade Credits and Structured Obligations (Master Direction),[1] and Foreign Exchange Management Act, 1999 (FEMA).[2] The article aims to help understand the ECB and its impact on the Indian Economy.

ECBs has made it easy for the Indian eligible entities to access foreign capital and meet its needs. ECBs are in simple words commercial loans taken for a commercial purpose in form of bank loans, suppliers’ credit, buyers’ credit or securitized instruments, sought from foreign lenders. The ECBs can be obtained through automatic route or approval route or by combination of both the routes. Monitored by RBI, ECB is a facility made available to Indian eligible entities to be able to seek huge investment from outside India and allow for foreign capital flow in India.

RBI in order to ensure inflow of clean funds, has divided the borrower as eligible entities and lenders as recognized non-residents, and has further kept checks in form of forms of ECB, end-use restriction, minimum maturity period etc.

The ECBs can be taken under Foreign Currency ECB (FCY ECB) and Indian Currency ECB (INR ECB) by eligible borrowers such as any entity which is eligible for seeking Foreign Direct Investment (FDI) or specified entities like Port Trusts, Units in Special economic zone (SEZ), Small Industries Development Bank of India (SIDBI) and EXIM Bank of India. The ECBs can be obtained from ‘recognized lenders’ i.e. any entity that is a member of the Financial Action Task Force (FATF) and International Organization of Securities Commissions (IOSCO). In addition to FATF and IOSCO, Multilateral and Regional Financial Institutions where India is a member country, Foreign branches / subsidiaries of Indian banks (subject to applicable prudential norms) and individuals if they are foreign equity holders or for subscription to bonds/debentures listed abroad, are also accepted as recognized lenders for obtaining ECBs.

The Master Direction has also clearly mentioned the negative list for which ECBs cannot be used as under:

To give a basic gist on the MAMP and End Use Permitted, please see the below chart: 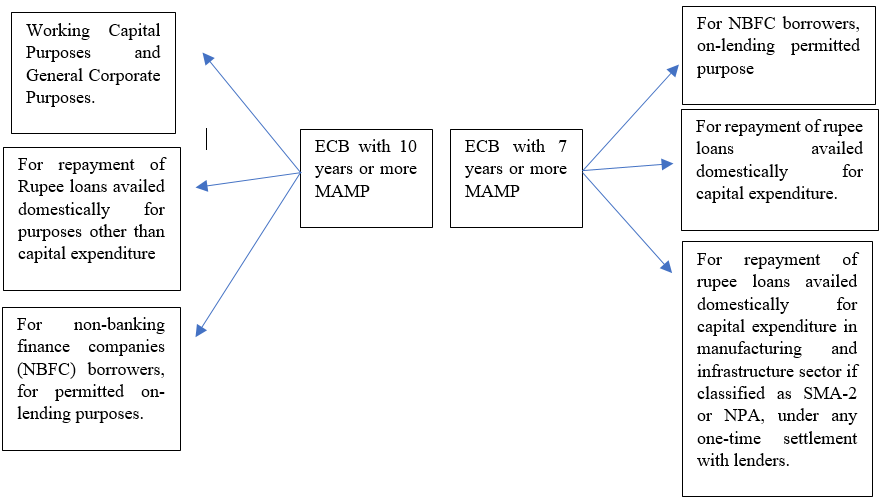 A recent reporting by the Hindu refers to the RBI data which confirms that India raised External Commercial Borrowings (ECBs)/ Foreign Currency Convertible Bonds (FCCBs) worth $25.17 billion (both under the Approval and Automatic routes) in the April-September period.[4] The borrowing is 53 per cent higher than the $16.48 billion that Indian entities raised during the comparable period last year.[5] In Financial Year 2019, the total borrowing through the ECB route was nearly $42 billion up from $29 billion in Financial Year 2018. 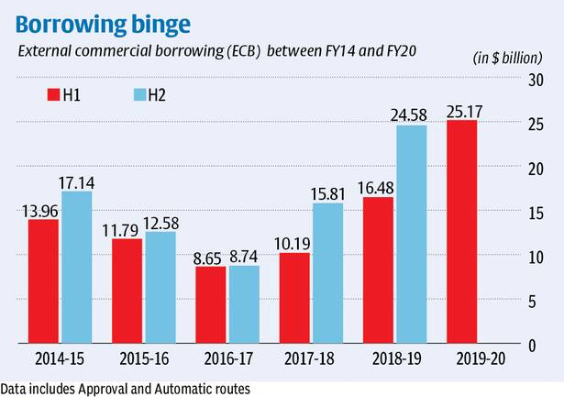 The ECBs have shown a growing trend which can be seen through the below chart: 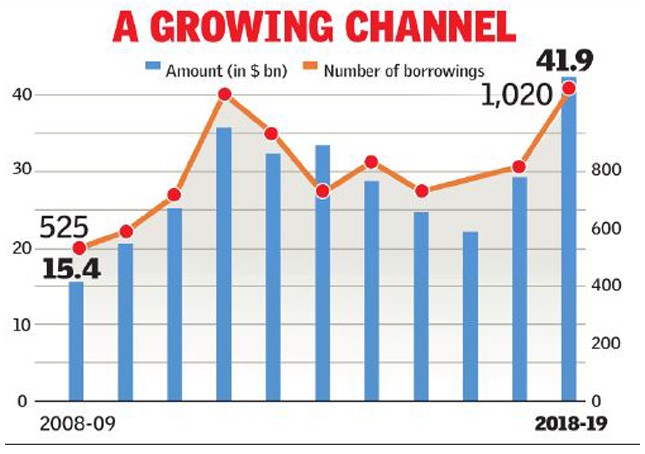 It is fair to state that with the RBI relaxing the rules for external commercial borrowings (ECBs), there has been a surge in ECB inflow, which can be seen below: 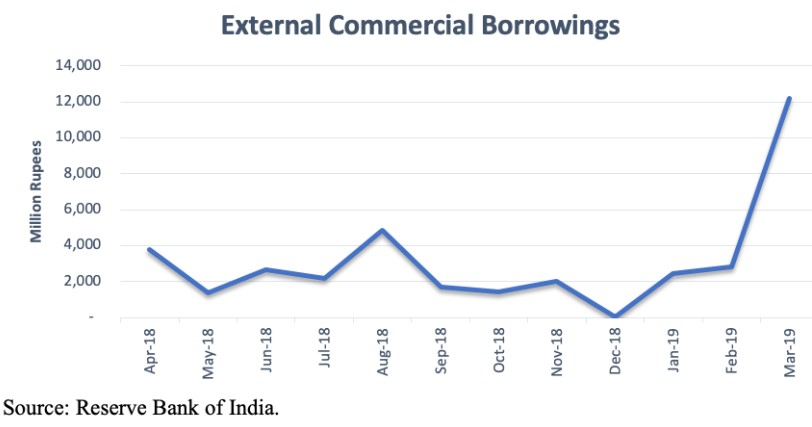 The recent report by RBI shows further increase in statistics on ECB Registrations as under: 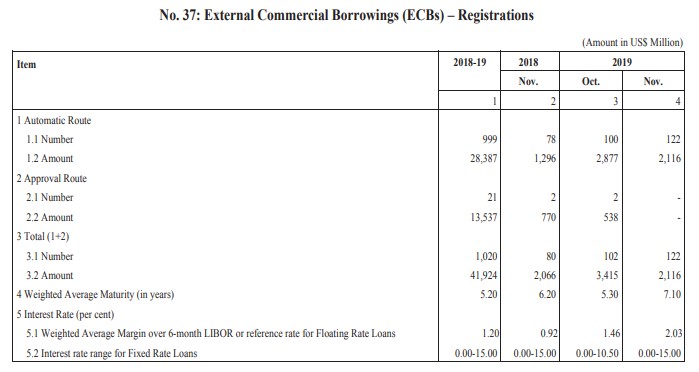 The RBI has in its January 2020 Bulletin confirmed that ECBs are one of the reasons of rise in external debt of India in 2018-19 and first half of 2019-20. The report further provides the below notes:

With favourable overseas conditions such as low interest rates and liquidity, the ECB is expected to be the preferred choice of India Inc., to bring investment/ loan for new projects, permitted use by RBI. The overseas market is expected to be favourable market for the foreseeable future, and therefore it is expected to lead to higher borrowings by India Inc. With RBI’s check on the ECB, making industry specific distinctions for automatic route and approval route, clearly establishing the end-use restriction and minimum average maturity period etc., it is expected that the ECBs are going to be the priority for bringing investment in India.

With RBI allowing the use of ECB proceeds for repayment of loans, the Indian GDP is expected to keep its stability intact and at the same time allows the Indian Corporates to seek required funds (which may not be allowed through local banks/ NBFC) from the overseas market with lesser interest rates.

[4] India Inc’s ECBs surge 53% in first half of fiscal year to $25 billion, available at https://www.thehindubusinessline.com/economy/india-incs-ecbs-surge-53-in-first-half-of-fiscal-year-to-25-billion/article29941885.ece

India: Permanent Establishment though subsidiary of a Foreign Company