Half of India’s Patents comes from 3 States- Is awareness need of the hour?

Whereas, on the contrary states such as Kerala, Madhya Pradesh, Orissa, and Himachal Pradesh each filed fewer than 1,000 patent applications, while Chhattisgarh and Bihar only filed around 150 applications each. On a more positive note, a notable fact via the national filing statistics came up in 2019 when a tremendous increase in filings from the north eastern states had been observed, which together showed an increase of more than 88% from 2018.

According to the Ministry of Science and Technology, Maharashtra contributed 25% of the total patent application in three years, followed by 15.5% by Tamil Nadu and 12.8% by Karnataka. 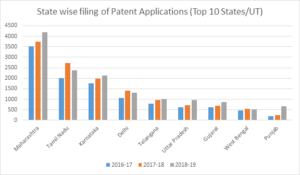 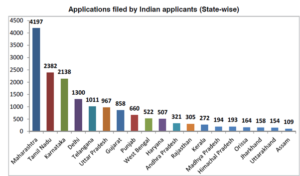 Strictly on the basis of the statistics from the World Intellectual Property Organization (WIPO), India ranks 9th in patents filed by resident scientists / innovators in each country. India’s global position in innovation and publishing has grown tremendously over the years. In 2020, India move up to 48 from its ranking of 66 in 2016 on the Global Innovation Index (GII). Similarly, according to the National Science Foundation, India ranked third in 2018 against its sixth ranking in 2014 in terms of scientific publications as well. Interestingly, the data provided by the Ministry of Science and Technology portrays that 99 percent of the funds allocated by the government to its various departments have been used to promote innovation, scientific activities and infrastructure. The number of researchers per million rose to 255 in 2017 from 110 in 2000.

As per 2021-22 budget, the Government announced for an allocation of Rs. 50,000 crore for over five years to be released to the National Research Foundation (NRF), an autonomous body designed to support researchers operating in varied fields of science and technology.

Conclusively, the amount of filings along with the percentage of grants have steadily increased since 2016 as the Indian government has undertaken various measures to boost awareness and promote the increasing rate of technological advancements by implementing a number of policies and reforms to support national innovators. 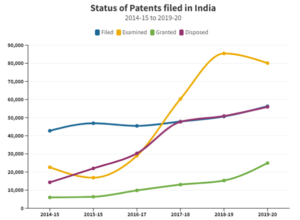 As a game changing move, government launched a Scheme for facilitating Start-ups Intellectual Property Protection (SIPP) to provide national innovators with high quality intellectual property services and tools to protect and commercialize their innovations. Furthermore, under the scheme of SIPP, IP facilitators were empanelled for assisting start-ups protecting their IP without charging any professional fee for providing services such as advising, drafting, filing and disposing off their IP applications. The said professional charges, as per specified fee structure by SIPP, is paid to the facilitator by the Central Government. The Ministry of Science and Technology revealed that since its launch in 2016, SIPP has provided a boost to innovators/start-ups in converting their ideas into patentable innovations. Indian start-ups filed a total of 3,683 patent applications between 2016-17 and 2019-20. 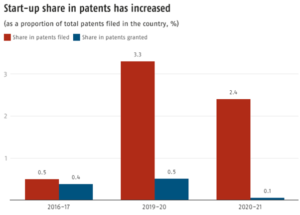 Five Steps to Turn your Idea into a Patent