In the present digital age when written media is overtopped by digital media, motion marks now play a substantial role in branding strategies. Motion marks, simply put, are the marks represented by any moving image or clip which recognizes the source or origin with reference to that particular product or offering, transcending languages and aural elements. Further, many countries across the world including India have encouraged the registration of motion marks. A motion trade mark also helps the illiterate and hearing impaired people to immediately associate a brand and aids in promotion over visual platforms/media. Motion marks in today’s digital age have gained momentum within big media houses looking for motion marks to represent their works. For instance, in the case of 20th Century Fox Movies the phrase ‘20th Century Fox movies’ appears in two lines in golden colour words. The visuals show the phrase while camera moves from right to left bringing the phrase exactly in the middle of the television or theatres screens.

POSITION IN THE EUROPEAN UNION

In the European Union, previously, according to Article 2 of the EU Directive 89/104/EEC[1], the capability of representing a trade mark graphically was an important factor in determining the registerability of a trade mark. In several cases, the registration of a motion mark was refused by the EUIPO because the stills in the application combined with the written description did not clearly show the motion in the mark and, accordingly, it was not sufficiently clear how the motion moved forward between the various stills.
However, now, the requirement of graphical representation is no longer a requisite while applying for a trade mark. According to Article 4 EUTMR[2], a trade mark should be able to distinguish the goods or services of one undertaking from the other and should be able to be represented in a manner which enables the competent authorities and the public to determine the clear and precise subject matter of the protection. Further, according to Article 3(3)(h) EUTMIR[3] a motion mark may be represented by means of electronic video file such as MP3, MP4 format etc which allows showing the motion mark in its natural state or by series of sequential still images showing movement or change of position (with still images being numbered or accompanied by a description explaining the sequence). This means that the representation may still be done by the means of written description of the mark; however, this is no longer a mandatory. Further, EUIPO has stated that a motion mark may only be refused registration under Article 7(1)(a) EUTMR[4] when a person with normal levels of perception and intelligence would not be able to understand precisely what the mark on the EUTM register consists of, without expending a huge amount of intellectual energy and imagination.

In the case of the Danish biotech company Nuevolution A/S[5], the court has refused to register the motion mark on the ground that it did not satisfy the requirement for graphic representation. It was held that it was not possible to grasp the movement described in the description of the mark from the sequence of images, the contrast from image to image is not sufficiently sharp and the design looks the same in each image. However, it also stated that, after the amendment, Nuevolution “may consider filing a new trademark application with an electronic file of the motion mark” This reflected that the court has recognised the new developed possibility of representing motion marks through video format.

Some examples of motion marks registered in the EUIPO are: (1) Sony Mobile’s Red Liquid Flowing in sequence of stills (movement mark) ( 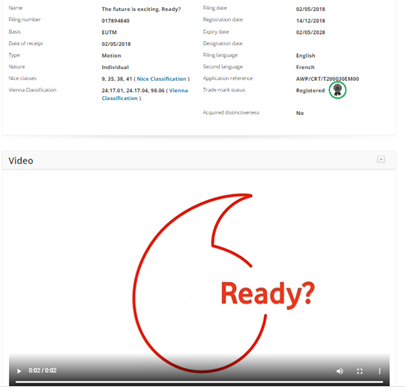 EUIPO has also rejected few motion trade marks that were represented through photographs such as the moving image consisting of a toothbrush moving towards a tomato, pressing onto the tomato without breaking the skin, and moving away from the tomato[8] (

). The application was rejected registration as it was not possible to establish the precise movement from the description provided alongwith the representation.

POSITION IN THE UNITED STATES

United States of America allows the registration of motion marks, and it is interesting to note that one of the oldest motion marks registered is in US by Colombia Pictures[9] in 1996 for its logo featuring a woman carrying a torch and wearing a drape, known as “Columbia, a personification of the United States (

To show that a motion mark is distinctive and indicates source of origin, the applicant of the motion trade mark is required to submit a specimen that depicts the motion sufficiently to show how the mark is used with respect to the goods/services, and that matches the required description of the mark. The specimen must show the entire repetitive motion by way of a video clip, a series of still photos, or a series of screen shots, to depict the commercial impression conveyed by the mark.[11]

Some of the examples of motion marks registered in the USPTO are: (1) United Airlines’ Big Metal Bird (

)[13] and the opening Lamborghini wing door (

In India, for a trade mark to be registered, it must fulfil the criteria as mentioned in Section 2(1)(z)(b) of the Trade Marks Act, 1999[15] i.e (1) capability of being represented graphically; (2) ability of distinguishing the goods or services of one person from those of the others.

Having said that, many entities have been successful in registering a motion mark in India under the category of series/device marks. Some of the examples of motion marks registered in India are given below:

Apart from proving the distinctiveness and also that the public recognizes the trade mark and associates it with particular goods/services, it is important to determine the functionality of the motion trade mark while determining the registerbility of the motion mark. It must be noted that a trade mark must be able to positively affect the sales and/or profit of a brand due to its use. However, the proprietor of the trade mark is not allowed to monopolise general features that are usually common and essential to all the traders in the industry[18] and must not restrict the other traders from claiming the general features in the market. While a unique ‘car door’ motion holds the potential to influence the brand’s prices and sale numbers, functionality of the motion must not put competitors at a disadvantage of not being able to claim general features in a market.

CHALLENGES FACED IN PROTECTION OF A MOTION MARK

Even though there are motion marks registered in India, the applicant of the motion trade mark often faces few challenges. They are:

The Issue of Representing the Motion Mark Graphically

However, this might not always be feasible because, in certain circumstances, the pictorial representation may not exactly portray the movement for which the applicant seeks to register the trade mark. Many trade marks might even be rejected on this ground. However, to overcome this, India may start adopting the laws of other jurisdictions such as the EU or US, wherein they have removed the requirement of graphical representation and started accepting even the video files of the marks, which would enable the examiner as well other third parties to exactly understand the motion of the trade mark for which registration is sought and raise objections/oppositions.

Difficult during the Determination of Similarity between the Marks

: In certain cases, it may not be possible to establish the precise movement from the description provided alongwith the representation, and therefore, determining the distinctiveness of the mark would become difficult. Also, in the case of raising objections or proving the infringement, it might be difficult to establish the similarity between the motions.

Sandhya A. Parimala, Associate at S.S. Rana & Co. has assisted in the research of this article.

[1] A trade mark may consist of any sign capable of being represented graphically, particularly words, including personal names, designs, letters, numerals, the shape of goods or of their packaging, provided that such signs are capable of distinguishing the goods or services of one undertaking from those of other undertakings.

[2] Article 4 EUTMR: An EU trade mark may consist of any signs, in particular words, including personal names, or designs, letters, numerals, colours, the shape of goods or of the packaging of goods, or sounds, provided that such signs are capable of: (a) distinguishing the goods or services of one undertaking from those of other undertakings; and (b) being represented on the Register of European Union trade marks (‘the Register’), in a manner which enables the competent authorities and the public to determine the clear and precise subject matter of the protection afforded to its proprietor.

[4] Article 7(1)(a) EUTMR: signs which do not conform to the requirements of Article 4.

[15] Section 2(1)(zb) of the Trade Marks Act, 1999: “trade mark” means a mark capable of being represented graphically and which is capable of distinguishing the goods or services of one person from those of others and may include shape of goods, their packaging and combination of colours