By Lucy Rana and Swaraj Singh

Various steps have been undertaken by the Government of India by way of providing incentives to encourage and promote educational institutions and start-ups towards innovation and filing of patents.

The boom of start-up initiative in India kick-started in the year 2016 to extend a helping hand for budding entrepreneurs in India. It has been recognized via the Startup India Programme that the start-ups receives up to 80% rebate in regard to patent filings.[2]

In addition, the Ministry of Commerce and Industry vide its notification dated September 21, 2021 has released the Patents Rules, 2021, highlighting a rebate of up to 80% on Patent fees for Educational Institutions. The constant support provided by the Indian government has also encouraged Educational institutes and tech companies with research and development (R&D) centres to help the Indian residents to actively file for IP applications in India. 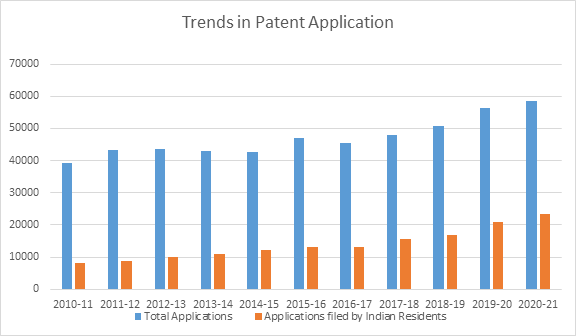 The climb in India’s ranking on the Global Innovation Index is indeed a positive step towards advancing the scope and ambit of filing patent applications in India.