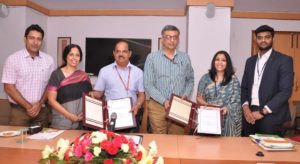 TheDepartment of Industrial Policy & Promotion was established in 1995 and re-formed in 2000. Having a progressive liberalization in the Indian economy, there had been a consistent shift in the role and functions of this Department. The role of the Department has been changed into facilitating the investment and technology flows and monitoring its industrial development in the liberalized environment. The Department is responsible for the formulation of promotional and developmental measures for having growth in the industrial sector, by keeping an eye on the priorities and its objectives.

The Technology and Innovation Support Centre programme would be established at Punjab Patent Information Centre, under the aegis World Intellectual Property Organization. At present there are 519 TISC services in the world. Around 59 countries have signed a Service Level Agreement (hereinafter referred to as the ‘SLA’) to develop a national TISC network since 2009-2016. Out of which 517 TISCs have been established to provide data to the TISC Directory. It provides a wide range of services like helping the inventors, researchers and entrepreneurs to unlock their potential.

TISC’s programme reduces the knowledge gap and promotes its economic and social development by providing an access to the technology information and services. It has been established in a variety of institutions which includes patent offices, universities, and research centers.

“TISC’s main objective is to stimulate a dynamic and a stable Intellectual Property Rights (IPRs) system in India to increase the creativity and innovation by enhancing social, economic and cultural development”.

Till date, WIPO had centers in 42 countries around the world but India was not a part of them. With the present agreement, for the first time such a center will come up at the Patent Information Centre (PIC), Punjab. WIPO’s TISC programme helps innovators in developing their countries scientific potential by having an access to nearby countries with high quality technology information, and by helping them to exploit their innovative potential to create, protect, and manage their Intellectual Property Rights (IPRs).

The Cell for IPR Promotion and Management (hereinafter referred to as the ‘CIPAM’) is considered as the National Focal Point for the TISC network which has been approved by the Government in May 2016. CIPAM will act as an intermediator between WIPO and TISC to coordinate all the activities of the network as CIPAM shall identify the potential of the institutions, judge their capacities and support them in joining the TISC programme. The Patent Innovation Center (PIC) has set up with 13 IPR cells in various universities of the state, in addition to the 16 IPR clubs in various engineering colleges and institutes around the country.