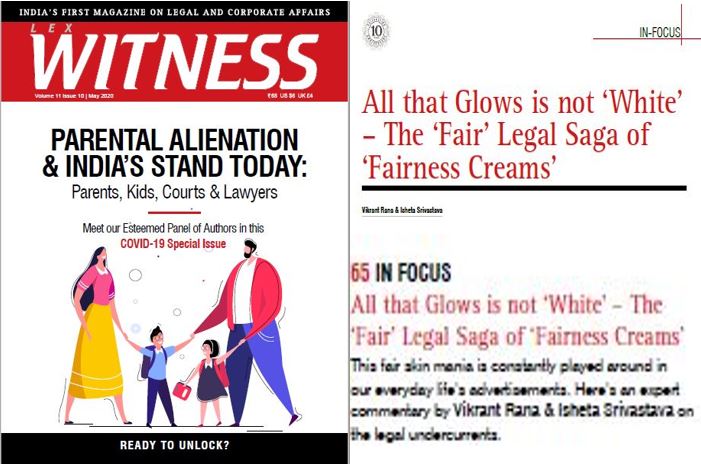 “Since the age of nine, I have been slapping my face with fairness creams/ Every face wash was a slap in the face because I was a skin tone which was… ugly/ I had a voice and opinion but they muted my sound/ Probably because I was told, boys only like girls who are fair and lovely.”

It is not wrong to say that the society at large has a fascination towards skin color, especially Fair- Skin or white-skin. Whether it is about going for a professional meeting or for a casual coffee, the acceptable good looking standard in our head is somewhere defined by looking fair.

This fair skin mania is constantly played around in our everyday life’s advertisements on our phones, television, social media, newspapers, magazines, comedy shows, matrimonial ads, movies, songs, web series etc. Various cosmetic brands, especially having creams & make up products, have started a bandwagon of Fairness advertisements and constantly fueling their pockets through it. Sadly, most of these ads breed on our insecurities of being dark, obese, or short.[2]

It is a bigger problem for the society because these false facts are glorified to an extent that it becomes a reality. This unreal reality is unfortunately giving birth to many crimes in the society.

Therefore, there is an urgent need to change this.

Factors such as increasing disposable income, influence of Bollywood stars and cricketers on young generation, western life culture have robustly increased the men’s fairness cream market in past some years. For generations, companies have been selling fair skin to young Indian women, promising better marriage and employment prospects.[5]

THE SAGA OF FAIRNESS CREAM ADVERTISEMENTS & THE LAW

In 2014, the Advertising Standards Council of India (ASCI), a self-regulatory industry body, issued a set of guidelines titled ‘Guidelines of Advertising for Skin Lightening or Fairness Improvement Products’. It majorly stated that ‘no advertisement should communicate any discrimination or reinforce negative social stereotyping on the basis of skin colour’.  Partha Rakshit, the then Chairman of ASCI, in one of his interviews to a newspaper daily, was quoted saying ‘Given how widespread the advertising for fairness and skin-lightening products is and the concerns of different stakeholders in society, ASCI saw the need to set up specific guidelines for this product category’.[6] The guidelines[7] mentioned that:

In the month of February this year, the Ministry of Health and Family Welfare took a strong stand against advertisements that define the so-called standards of beauty acceptable within the society. It proposed Draft Drugs and Magic Remedies (Objectionable Advertisements) (Amendment) Bill, 2020[8].

The new draft bans advertisements of products that promote fairness creams, enhance sexual performance, cure premature ageing and greying of hair, improvement in height of children or adults, increase in brain capacity and memory, improvement in strength of teeth and vision, change of foetal gender by drugs.[9]

‘A New Delhi-based company has touted through advertisements a formulation for fair skin, angering Council of Scientific and Industrial Research scientists who say they had developed the formulation to treat acne marks. The company, which sells the formulation through retail online electronic commerce channels, has described it as a “skin glow formulation” for “fair skin”, which CSIR scientists and dermatologists point out is a violation of the Drugs and Magic Remedies Act. The product’s packaging specifies that the formulation was developed and licenced by the CSIR’s North East Institute of Science and Technology in Jorhat, Assam. “We had never intended our formulation to be promoted as a fairness cream,” a senior NEIST scientist said.’[11]

In one of its kind, the Calcutta High Court in its recent decision on June 25, 2020 in the case of Mazidul Miah @ Mia & Ors. v State of West Bengal[12] has strictly held that Cruelty against a wife for her dark complexion will be punishable under section 498A of Indian Penal Code (IPC). It opined  in its decision that ‘Causing cruelty to deceased victim for her black complexion even after her marriage by the in-law’s members would definitely attract Section 498A/34 I.P.C. against the in-law’s members, including accused husband.’[13]

In this case, a young girl of merely 20 year in age died by hanging just months into her marriage owing to which her husband and his family was convicted by the Trial Court for murder under Section 302 of the IPC and cruelty under Section 498A of the IPC, both read with Section 34 of the IPC.[14] The Court in its decision took note of the fact that this death was not a dowry death. The case rather highlighted the plight of a women of dark complexion whose in-laws were constantly dissatisfied with her due to her looks. The Court noted that ‘After visit to her in-law’s house, deceased victim was put to suffer cruelty, oppression and ill-treatment by her in-law’s members, including her accused husband for her black complexion. She was not loved by family members of in-law’s house, and frequently abused her with a threat that accused husband would be given marriage shortly after repealing her marriage and driving her out of the matrimonial home.’

Upholding the conviction of the Appellant the Court held that ‘The established fact is that there was an unnatural death of deceased held within seven months of her marriage. Such unnatural death was admittedly held in the in-law’s house of deceased victim. There was sufficient evidence to show that the victim received oppression, ill treatment, torture, cruelty in her in-law’s house by her in-law’s members for her black complexion……The facts and circumstances would thus unerringly point to the guilt of accused husband/appellant for causing homicidal death to deceased/wife by strangulation for his non-satisfaction over the black complexion of his wife, which led to give birth his motive to cause death of his wife.’

An addition to an age-old belief of ‘Fair Skin is beautiful’, are the numerous trademarks for skin cream products that have been filed having fair, white, glow in different combinations.

It is pertinent to mention here that the above-mentioned search results are very few registered trademarks that have been taken as an example. There are hundreds of other trademarks not only for cosmetic products but also pharmaceutical & medicinal products that have been registered with the words like fair, glam, glow, white, beauty, skin lightening etc.

The Indian society narrative of ‘Fair Skin’ is deep rooted & has been there for a long time now. Therefore, the need of the hour is to bring a revolutionary change in the mindset of the society. Apart from the government proposing punishments, it is also required that the stakeholders especially the brands and public faces come together and make a far-reaching impact with the help of visible examples.

Celebrities saying no to fair skin

It is now expected that the Draft Drugs and Magic Remedies (Objectionable Advertisements) (Amendment) Bill, 2020 would become an Act in coming times. The global outcry about racism based on obsession of fair skin colour coupled with the Indian Government’s robust stance against punishing those who discriminate anyone based on skin color, the change is bound to happen. With big brands like HUL, L’Oréal, Johnson & Johnson, Nivea etc. rebranding themselves, it will be interesting to see who all join the bandwagon & be a part of the revolution related to discrimination based on skin-colour.