Due to the advent of technology and accessibility of products with just a click of the button, there is a growing need for the protection of brands and their uniqueness. At this point, the importance of trademark protection is well understood by the brand owners. Protection of the various facets of brands becomes necessary to maintain the uniqueness and recall of the brand. Even from the customer’s point of view, trade mark protection is necessary as the same denotes the origin of that particular product and assures the customer of its quality.

“a mark capable of being represented graphically and which is capable of distinguishing the goods or services of one person from those of others and may include the shape of goods, their packaging and combination of colours.[1]

Marks such as signs, icons, words, slogans or a mixture of them are traditionally seen as the subject matter of a trade mark application[2]. These are conventional trade marks which are expressly protected under the Act[3], and are understood as such by the consumers in general.

There is a separate category of marks that form an identity and instant connection with the brand by engaging the senses of smell, taste, sound, touch etc. These are known a non-conventional or non-traditional trade marks.

Due to enormous increase in the availability of varied products and the limitless promotions carried out by the brand owners, there is an increase in the need to have a permanent mark or consumer memory. The primary aim behind any trade mark is to create an impact in the minds of the potential consumer which in turn creates a recall value of that brand. The packaging, advertisement storylines, brand narrative etc directly and instantly associate the particular product with the producer thereby establishing a connection of the consumers with the products/brand which goes way beyond just a name into a zone of brand value, recognition and loyalty. The need for a unique and distinctive identity is what has led to the growing use of unorthodox and non-conventional marks. Furthermore, with the wider reach of the internet and e-commerce, it is clear that non-conventional markings will attract the attention of users far more effectively than traditional markings. Such trade marks also play a vital role in aiding the visually / hearing impaired and uneducated people to identify the source/origin of the product using alternate indicators. However, despite having great importance, a very small number of non-conventional trade marks are being registered as compared to their traditional counterparts.

Is a Non-conventional trademark recognized under the Indian Trademark Law?

The Trade Marks Act, 1999 does not define the categories of marks registrable. The Act defines what marks are not registrable under two headings, namely; Absolute grounds of refusal[4] and Relative grounds for refusal[5] thus, laying the requisites for registration of a trade mark. The basic qualification for registrability of a mark is contained in the definition of trade mark itself, namely:

There is a requirement for all the trade marks to be able to be graphically represented, for the same to be eligible for registration. The 2017 Rules define graphical representation to mean representation of a trade mark for goods or services in paper form which also includes digitized form.[7] Therefore, to prove if a particular mark can be registered under the Indian Trade Mark Law, it is sufficient if the mark to be registered is or can be represented graphically and is capable of distinguishing the goods and services of that product from others. Due to the inclusive nature of the definition of a ‘trade mark’, any non-conventional trade mark can fit into the ambit of a trade mark if the above two conditions are satisfied. Therefore, the important question to be answered is if the non-conventional marks can be graphically represented and are distinctive of the products.

) in Class 08[10]. Further, a single colour can also be protected by way of its unique position. For example, the famous footwear brand Christian Louboutin has red colour registered for the sole of its shoes[11] (

) and the Delhi High Court has also protected the Red Colour Sole of Louboutin Shoes and held the colour to be distinctive on the sole of a non-red shoe.[12]

Shape marks: A trade mark can include the shape or appearance of goods or their packaging, as long as it can be visually represented, according to the Trade Marks Act. The goods sold under such a trade mark are distinguished from those offered by another manufacturer by their look and feel. Further, for a product’s shape to be registered as a trade mark, it must not serve as a functional component of the product. To safeguard its originality and identity, the Coca-Cola bottle for example, was granted trade mark for their shapes[13] (

). Further, protection is also granted to 3-Dimensional shapes and also for the packaging of products such as the distinct shape of Toblerone Chocolate[14] ( 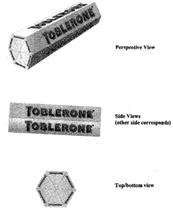 ) are registered as trade marks.

Motion marks: A motion trade mark is a moving logo that is used as part of a creative marketing plan to attract customers to the products. Any motion mark is created utilizing animation, computer programs, and any moving object. Motion marks are registered using the same criteria as other types of trade marks, but they account for a small percentage of trade mark submissions in India. When submitting a motion mark registration, the corporation or individual must remember that any movement in the mark must be depicted in the order in which it is being displayed for the product. Example of a motion mark registered in India is Toshiba ( 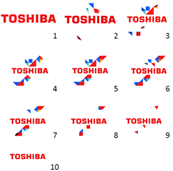 Hologram marks: A hologram is a 3-Dimensional image formed by the interface of light beams. Holograms possess multiple images or colors that are visible only when viewed from different angles. Even though holograms can be very helpful in identifying the origin/source of a product through its distinctiveness, it is difficult to represent the same in written form, as the applicant would have to describe the trade mark when viewed in different angles. A famous example would be the hologram present on the American Express credit card, which is registered

Sound marks: In India, sound that is graphically represented by a succession of musical notes with or without words can be protected under the Trade Marks Act. If a sound is or has become a distinctive symbol connected with one undertaking, it will be granted trade mark registration under the Act. As a result, in order for a sound trade mark to be registered, the average consumer must perceive the sound as being linked with a specific service or product. Example of sound tracks registered as trade mark is Nokia (Guitar notes on switching on the device)[18].

Smell marks: Smell that is associated with a particular product and is a source identifier of the said products can be termed as a smell mark. Since depicting the smell of a product graphically is difficult, the smell marks are rarely registered. Examples of some scent marks include bubble gum scent for shoes and footwear owned by the Brazilian manufacturer “Grendene”.[19] However, due to the doctrine of functionality, olfactory marks from beauty or self-care products like cologne or perfume are ineligible for registration as a trade mark. In India, no smell marks appears to be registered till date.

In spite of the great importance associated with the non-conventional trade marks, there are a lot of challenges associated with the registration and enforcement of such marks. In addition to the difficulty in representing it graphically, the public also rarely identify the products or goods through the smell, sound or touch of the products as a primary indicator. In fact, these marks are most often used as secondary source to identify the products and for marketing and advertising purposes.

However, these obstacles in the way of non-conventional trade marks should be viewed as an opportunity to offer innovative approaches, rather than a discouragement to their use. India has given its approval to Intel’s sound trade mark. This paradigm change from the usual concept has commercial implications and it necessitates global uniformity. It may be deduced that non-traditional trade marks are becoming more important in contemporary times, and that adequate policies should be in place to promote and govern the use of such trade marks in India.

Sandhya A. Parimala, Associate at S.S. Rana & Co. has assisted in the research of this article.

IMPORTANCE AND CHALLENGES OF PROTECTING A SHAPE MARK