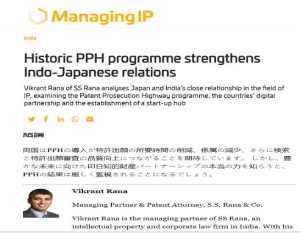 Vikrant Rana of SS Rana analyses Japan and India’s close relationship in the field of IP, examining the Patent Prosecution Highway programme, the countries’ digital partnership and the establishment of a start-up hub.

Indo-Japan relation started with introduction of Buddhism in Japan in 6th century. After World War II, in 1949, Indian Prime Minister Jawaharlal Nehru donated an Indian elephant to the Ueno Zoo in Tokyo. This brought a ray of light into the lives of the Japanese people who still had not recovered from defeat in the war. Japan and India signed a peace treaty and established diplomatic relations on 28th April 1952. This treaty was one of the first peace treaties Japan signed after World War II.[1] Since then both India and Japan have nurtured and retained strong support for each other in a manner strengthening each other’s position in the global community. In recent times, under the diplomatic leadership of Modi and Japanese Prime Minister Abe Shinzō, Japan and India have continued to strengthen ties, cognizant of their growing importance to one another.[2]

India as an IP regime aims to meet requirements of constantly changing IP landscape and aspires to strengthen the culture of transparency accountability and efficiency in its management. It endeavors to establish a vibrant and balanced IP regime in the country to support the country’s innovation and developmental objectives.

On July 17, 2019 the Office of the Controller General of Patents, Designs and Trade Marks (hereinafter referred to as the ‘Office’), released its Annual Report for the year 2017-18. The Office has shown consistent growth over the years. This year, overall filing of applications for various intellectual property rights (3,50,546) has been practically same when contrasted with the previous year (3,50,467). The expanding pattern in recording of filing for Patents, Designs, Geographical signs and Copyright has been observed except for Trademarks where there is slight decrease when contrasted with 2016-17. The trends of the last five years with respect of filing of intellectual property applications are shown below –

IP Filings by Japan in India

In 2015, a Memorandum of Cooperation (MOC) was signed between India & Japan in order to further the investment and business expansion by Japan’s industrial sector in India, which is believed to have an incredible potential to become one of the leading markets in the world and a hub for innovation, research and development.[3] Further, recognizing the close cooperation in Intellectual Property Rights between the Intellectual Property Offices of the two countries, the two leaders concurred to start a bilateral Patent Prosecution Highway programme on a pilot basis in certain identified fields of inventions in the first quarter of FY 2019.[4]

A significant growth has been witnessed in number of patent applications received by the Patent Offices across the world. One of the major catalysts in this growth is globalization in sectors like commerce, technology, education etc. Same patents being filed in multiple countries has forced patent offices to come together and work in cooperation with each other. Large number of pending patents and a bid to increasing productivity has encouraged Patent offices to work together by opting for the avenue of Patent Prosecution Highway (hereinafter referred to as ‘PPH’).

The Union Cabinet on November 20, 2019 approved the proposal for adoption of Patent Prosecution Highway (hereinafter referred to as ‘PPH’) programme by the Indian Patent Office (hereinafter referred to as ‘IPO’) under the Controller General of Patents, Designs & Trade Marks, India (CGPDTM) in collaboration with Patent offices of various other countries and regions. India’s PPH programme first commenced between the Japan patent Office (hereinafter referred to as ‘JPO’) and IPO for an initial period of three years. Further, the procedure guidelines were issued for addressing the procedures that are to be followed by applicants to request expedited examination through the Patent Prosecution Highway program between IPO and JPO. The bi-lateral PPH pilot programme consists of Normal PPH and PPH MOTTINA.[5] In furtherance of the IPO released the official procedure guidelines for the PPH pilot programme between the Indian Patent Office (IPO) and the Japan Patent Office (JPO), available here.

IPO again started accepting Form 5-1 under Chapter 5 of the PPH Guidelines from March 9, 2020

As per an updated posted on the official website of Indian Patent Office (IPO)[6], the filing of Form 5-1 (Information for PPH Patent Prosecution Highway ) request to the IPO (IPO as OLE, JPO as OEE)) under Chapter 5 of the PPH Guidelines commenced on December 5 2019. After scrutiny of 100 requests received, 56 requests were accepted by IPO and the applicants were allowed to file request for expedited examination on Form 18A. However, there were 44 request that were found not eligible as per the PPH Guidelines. In furtherance of the same the IPO again started accepting Form 5-1 under Chapter 5 of the PPH Guidelines from March 9, 2020. It is pertinent to mention here that the number of requests were limited to 44.

IPO once again opened its doors for accepting Form 5-1 under Chapter 5 of the PPH Guidelines from August 10, 2020

As per a latest update[7] on the same, After scrutiny of 44 requests received in the second round, 35 requests were accepted by IPO as per the Guidelines and the applicants were allowed to file request for expedited examination on Form 18A. This time since 9 requests slots are still available as per the PPH Guidelines, the IPO will again start accepting Form 5-1 under Chapter 5 of the PPH Guidelines from 10th August 2020. Interested applicant are requested to take note.

Both Indian and Japanese governments have also been taking initiatives to strengthen the economic collaboration between the nations as well as to create suitable opportunities of investment.

Apart from PPH, India and Japan are also working together fueling & strengthening the Indian Start Ups as well.   A “India-Japan Digital Partnership” (I-JDP) was launched during the visit of PM Modi to Japan in October 2018, furthering existing areas of cooperation as well as new initiatives within the scope of cooperation in S&T/ICT, focusing more on “Digital ICT Technologies”. This incorporated setting up “Start-up Hub” between India and Japan.

As part of that, during Minister Seko’s visit to India in May 2018, a Joint Statement on Japan-India Startup Initiative was signed. Under this, first Startup Hub was established in Bangalore by JETRO to identify selected Indian start-ups for Japanese market and for potential Japanese investors. Thereafter, Startup-India (under Invest India) and Japan Innovation Network (JIN) have signed a MoU on innovation collaboration with a focus on SDGs (Sustainable Development Goals) connecting two start-up eco-systems in June 2018. Invest India also launched online portal for the Start-up hub.

With the introduction of PPH, both the countries hope that this will reduce time to dispose patent applications, decrease their pendency and improve the quality of search and examination of patent applications.[9] However, the results of PPH would be intensely watched to understand the genuine capability of Indo-Japan IP partnership for prosperous future.

India: An overview of Procedure Guidelines for Patent Prosecution Highway