Pecuniary Jurisdiction of the Delhi High Court raised to 2 crores

On August 05, 2015, the Parliament of India passed the Delhi High Court (Amendment) Bill, 2015 to enhance the pecuniary jurisdiction of civil suits in the High Court of Delhi from the existing Rs. 20 lakh to Rs. 2 crore. The purpose of the Bill is to reduce the workload of the High Court and distribute the burden to the lower courts.

Pecuniary jurisdiction refers to the jurisdiction of a court over a suit based on the amount or value of its subject matter/ damages claimed.

The aforesaid Bill was already passed by the Rajya Sabha (Upper House) earlier this year on May 06, 2015. It has now been adopted by a voice vote in the Lok Sabha (Lower House).

General Implications of the Bill

The implication of the amendment Bill is three-fold:

1. Once the Bill is implemented, the Chief Justice of the High Court will be empowered to transfer any pending suit valued upto Rs 2 crore to the concerned lower court. According to the information submitted by the Registrar General of the Delhi High Court to the Parliamentary Standing Committee, there are 12,211 such pending cases at present. They will be transferred to the concerned district courts, and eight judicial officers who are on deputation as Joint Registrar (Judicial) to the High Court will be repatriated to district courts to deal with the cases.

2. The implementation of the Bill would also considerably reduce the workload, pendency of cases and backlogs of the High Court of Delhi.

3. Most importantly, people hailing from distant areas will also get relief as they will no longer have to travel all the way to the High Court, and can now seek relief in the concerned district courts itself. It will bring the judiciary closer to the litigant public and cut the cost of litigation, as the cost of hiring a district court lawyer is much less than that of engaging a High Court counsel. 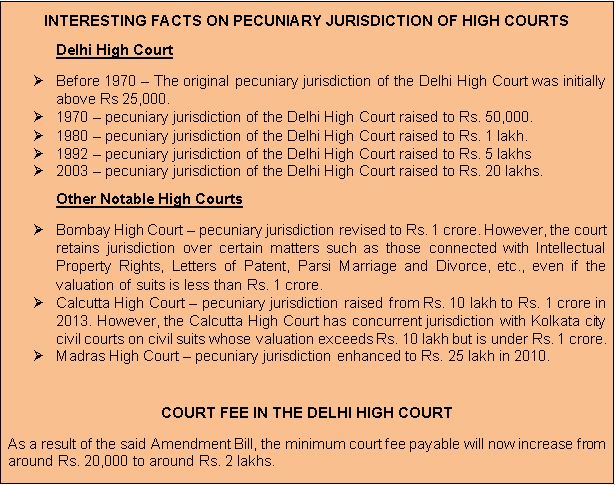