By Ananyaa Banerjee and Soumya Sehgal

The Bacardi Fun continues at the Bacardi HQ as the High Court of Delhi on November 12, 2021 issued an injunction against the defendants, which includes a Lebanese beverage company and its Indian distributor, inter alia restraining them from using the mark ‘FREEZmix’ in respect of their product line, as a result of the commercial case lodged by Bacardi and Company Limited (plaintiff), prima facie alleging infringement and passing off of their popular alcoholic beverage which goes by the name ‘BREEZER’.

However, readers would undoubtedly note that prima facie the words ‘BREEZER’ and ‘FREEZmix’ are prima facie do not appear to share significant similarity. However, it is rather the other elements involved in this dispute which make this case an intriguing one!

Submissions by the Plaintiff

The plaintiff possesses registrations for the word mark BREEZER, as well as the shape mark for the shape of their products’ bottles in Classes 32 and 33, claiming use since 2003. The plaint all-in-all was filed on the following grounds:

In sum, the plaintiff submitted that the overall presentation of FREEZmix was consciously designed to come “as close as possible” to that of BREEZER, so as to deceive unwary consumers of average memory and intellect.

Additionally, the plaintiff also pointed out discrepancies in the trademark applications filed by the Defendants, wherein use claimed for the mark FREEZ was since 2001, however the application was filed in 2015 on a ‘proposed to be used’ basis. Moreover, use claimed for the word mark FREEZmix was since 2018 and the Defendants did not place on record any material to substantiate their claim of use.

Defences taken by the Defendant

The Defendant’s counsel on the other hand defended their case on the following contentions amongst other things:

However, this contention was rebutted by the Plaintiff’s counsel with the submission that the former mark nonetheless continued to retain goodwill and is associated with the plaintiff’s product alone, till date.

While dealing with the similarity between the two products, Hon’ble Mr. Justice C. Hari Shankar primarily identified that:

In view thereof, it was concluded that the entire attempt by the defendant, prima facie, appears to have been to capitalize on the plaintiff’s goodwill.

Applying Section 29(2) of the Trade Marks Act, 1999, the Hon’ble Judge opined that if the Defendant uses its mark in such a way as to lead the public to believe the existence of association between the Defendant’s and Plaintiff’s mark, the tort of infringement, ipso facto stands committed – confusion or no confusion, further stating that where an attempt to confuse or deceive is discernible, the court leans in favor of finding the attempt to have been successful, rather than a failure.

Subsequently, an injunction was granted in favor of the plaintiffs, restraining the defendant from using the marks FREEZ

,, or any other mark/label/sign/device/name or domain name, which is identical to any of the plaintiffs registered marks.

This well-reasoned order by the Hon’ble Mr. Justice C. Hari Shankar is an interesting read on the various facets involved in a trademark infringement case involving different facets of IP rights – from shape marks to factors such as colour-combination.

The Court’s Order dated November 12, 2021, breaks down the various facets of IP involved in this matter in a very detailed matter, and came to the conclusion that as a whole, a case of infringement is made out, and that the aspect of passing off does not even merit deliberation in light of the facts and circumstances.

The Court also reinforces the notion that in such cases, while comparing the marks/ products in issue, the same has to be done from the perspective of an average consumer having imperfect recollection. Regarding the similarity between the wordmarks in question, the Court has pointed out that the “FREEZE” aspect of Defendant’s products’ name is phonetically similar to “BREEZ” of the Plaintiff’s, and the mere addition of the second minor syllable “er” cannot render the marks dissimilar.

Lastly, to reiterate similarity as a whole, the Court relied upon the below comparisons: 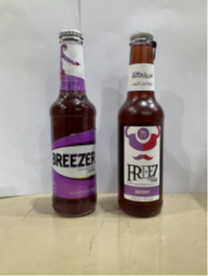 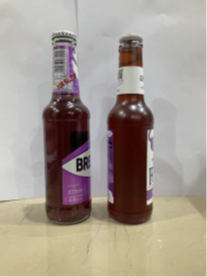 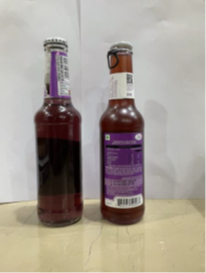 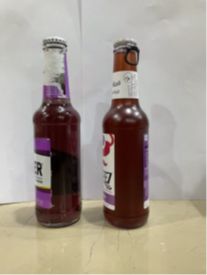 Further to the above, the Court has also inferred that while the Plaintiff’s beverage is alcoholic and the Defendant’s is decidedly not, the same cannot be a successful defense herein, as the Plaintiff has satisfied the ‘Triple Identity Test’ – i.e., 1) Similarity of marks; 2) similarity of products; and 3) availability through common sources.

Thus, this case is also an important reiteration of the ‘Triple Identity Test’.