Trends of Patenting in India

The creation and monetizing of intel- lectual property assets has significantly increased in the recent times. The obligations under the TRIPS agree- ment led to several legislative changes
including amendments in the Patent Act. These changes have widened the scope of IP protection in India thereby resulting in more filings for Patents, Designs, and Trademarks. TRIPS have contributed in encouraging inven- tive activity and the same is heralded to have encouraged worldwide technology transfer and promoting international trade.

The patenting activity of any country is the significant indicator of its innovation and hence the commercial, scientific and techno- logical development. Interestingly the current decade has been declared as the “Decade of Innovation” in India.

The idea behind this declaration is to stimulate innovations in the country. The increase in GDP coupled with stable financial and eco- nomic structure has simultaneously created a market for new products and given an upward swing to the country’s R&D activities particu- larly in fields relating to Information Technol- ogy, Drugs, Pharmaceuticals, Biotechnology, Entertainment etc. The present study profiles patenting activity in India, particularly in last year, and presents general statistics on the trends of application filed and granted in past few years. Barring trademarks, the global fi- nancial crises affected the overall filing rate of applications in India; consequently the office of CGPDTM has witnessed a 5% reduction in generation of revenue.

There was about 6.8% reduction in the patent applications filed in 2009-10. However the Indian applicants contributed about 20.54% of the total 34,287 applications filed last year, which depicted a healthy growth compared to the previous year.

The Council of Scientific and Industrial Re- search was the top among Indian applicants with 162 applications.

The pie-chart on the right represents the top ten Indian applicants: 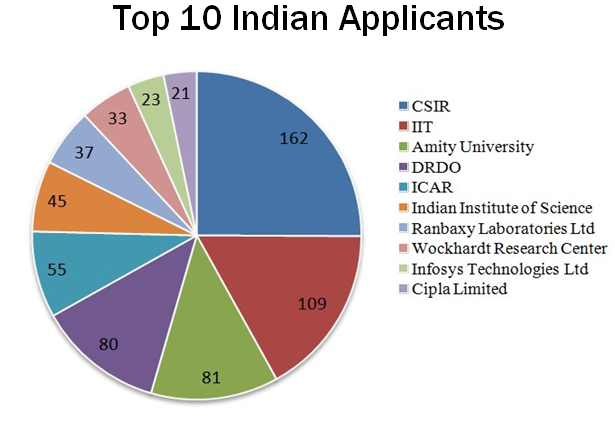 With 2986 filing in 2009-10, the number of convention applications recorded a decrease of about 29.83% over the previous year’s filing.

Majority of foreign applications were however through PCT route which accounted to 23431 applications.

The USA filed the maximum number of ap- plications followed by Germany, Japan and Switzerland respectively.

The top 10 foreign applicants are mentioned on the right: 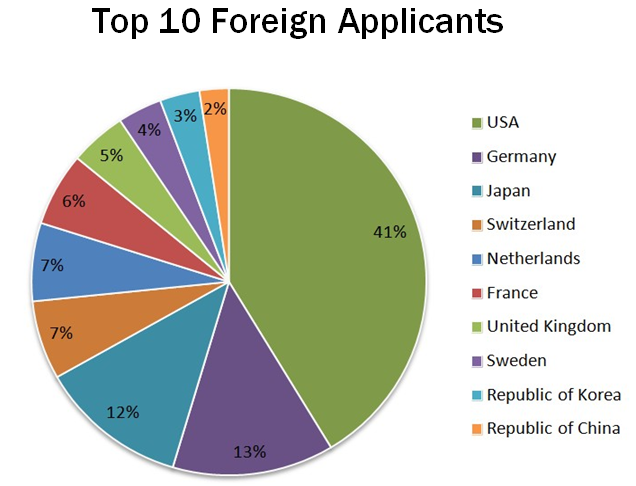 Barring last year, there has been a gradual and significant increase in the number of applica- tions filed in the past five years. The decline in the National Phase applications by 8.85% in 2009-10 may be attributed to the worldwide economic crises.

The trend of National Phase applications in the last five years is shown on the right:

Qualcomm Incorporation was the top foreign filer in India and was followed by Koninklijke Philips Electronics N.V., Sony Corporation and Nokia Corporation. 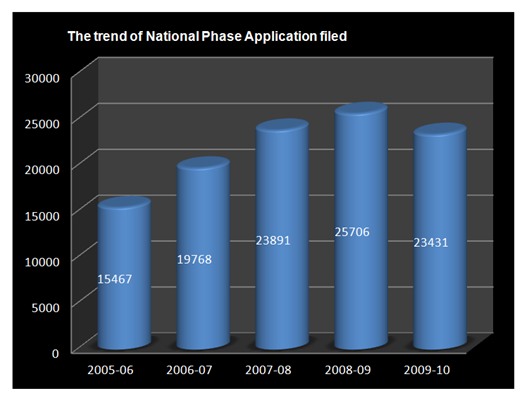 Of the 34305 applications published last year (u/s 11A) only 103 pre-grant oppositions were filed.

However only 32 pre-grant oppositions were disposed off during the year.

The general trend over the last five years (as depicted below) shows that the percentage of opposition proceedings amounted to less than one percent of the total applications published. 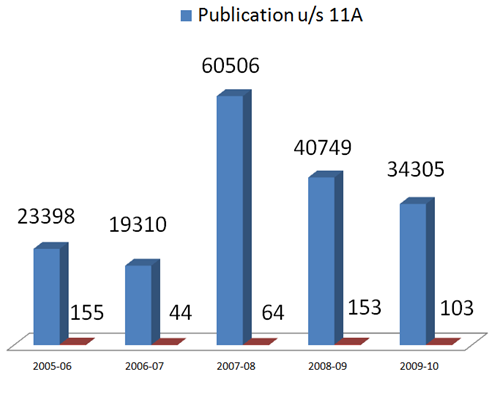 Total number of patents granted during the year was 6168 out of which 1725 were granted to Indian applicants. 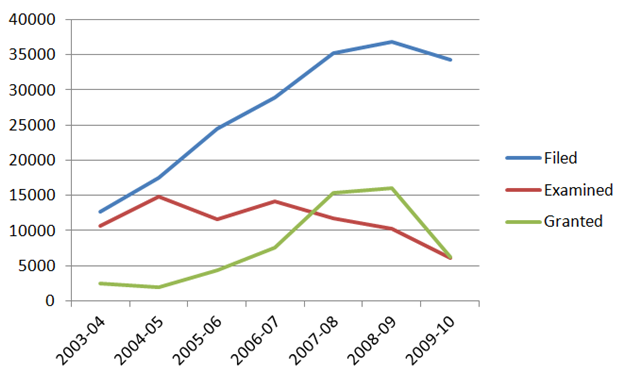 As evident from the above graph the number of applications filed, examined and registered has gone down in the last year, other than the impact of global finan- cial crises the decline may also be attributed to the fact that a lot of manpower and human resource at the Patent Office is committed to digitization and compi- lation of the records and thus the fewer number of applications were examined and consequently granted last year.

Though India is making progress in financial and economic sector, the country’s inventive growth has been declining. As per the report prepared by INSEAD, an international gradu- ate business school, along with Alcatel-Lucent, Booz & Company, the Confederation of Indian Industry (CII), and the World Intellectual Property Organization (WIPO), India was ranked 62nd out of 125 economies measured for innovation levels.

Thus it is essential that various R&D institutes and departments take appropriate measures to enhance innovation process of the country.

Technical and financial aid should be provided by the government and non government organizations to the grassroots innovators and inventors so that a research culture can be cultivated and nurtured so that the researchers “Patent and prosper and not publish and perish”.

Data Source: The details and all statistical figures are taken from the Annual Report (2009-10) published by the Indian Patent office.

Vikrant Rana is the managing partner of S.S Rana & Co., a premier Intellectual Property Law Firm of India. Vikrant read law at the Uni- versity Delhi in 1996 and is enrolled as an Advocate with the Delhi Bar Council since 1996.He is an Advocate-on- Record with the supreme court of India (2006) and registered as a patent agent in 1998. He has been litigating in courts all over India, primarily at the Supreme Court of India, various High Courts across the country, Trademarks Registry, Patent Office, Intellectual Property Appellate Board and the Copyright Board of India.

As an experienced IP Attorney he spearheads the team at the firm which includes specialists in law, chemical, biotech and electronic sector.

Having majored in Economics, Vikrant has an in depth understanding of micro and macro factors influencing businesses. With this business under- standing, for over a decade, Vikrant has been pro- viding practical legal advice to many Fortune 500 companies and some of the world’s most esteemed corporations, on securing, protecting, enforcing and exploiting their Intellectual Property assets in India and world over.

His clients range from the disparate fields of food and beverages, IT, e-commerce, health and fit- ness, Electronics, Chemicals and Pharmaceuticals etc.

He is actively involved in sensitizing awareness on Intellectual Property Rights in India and is associated with several government organizations including the TIFAC, Department of Science

Vikrant has authored several articles in leading law magazines and journals including Managing IP, World Intellectual Property Review, Legal Era etc. His chapter in the book titled, “A Practical Approach to Intellectual Property Law”, has been well received by readers. He is a member of sev- eral law associations and forums including INTA, APAA and AIPPI.

He has been nominated by esteemed clients for the ILO Client Choice Awards 2012 (Interna- tional Law Office) for providing exceptional legal services pertaining to Intellectual Property Law. Vikrant has successfully mentored many aspiring lawyers and IP practitioners and their success bears testimony to his guidance. He is also an avid sports man and captained his school volley ball team.

An enthusiastic runner, he has been running the prestigious Delhi Half Marathon (21Km) for the past 4 years.