Abbreviations and trademarking thereof is common in many countries of the world, including in India. Abbreviations are powerful brand markers, which oftentimes are much more famous than the name or brand in question! Indeed, one can say that famous Indian abbreviations such as the BCCI, UGC, RAW, FICCI, NOIDA, AIIMS, etc. are more popular than their full forms! Many would even be hard-pressed to even provide the full-forms of such famous abbreviations.

However, one of the worst things that can occur with usage of abbreviations from a trade mark perspective is that when two different entities have been using the same abbreviation, and both acquire enviable goodwill and reputation. Such a recipe for disaster can be grossly exacerbated by the unfortunate circumstance wherein both entities are involved in the same industry/business or deal in similar/identical goods and services. Another factor which would further complicate the situation is that both entities in question have been using the said abbreviation for a very long time and one does not have significant primacy over the other, in terms of prior adoption. While the above situation and amalgamation of circumstances appear to belong to the realm of unreal, such situations have in fact occurred in the past, with the case of WWF (World Wide Fund for Nature) v. WWF (World Wrestling Federation) being one of the most noteworthy of such cases in the world – which lead to the famed World Wrestling Federation (WWF) rebranding itself to World Wrestling Entertainment (WWE), despite it having significant independent goodwill and reputation in the abbreviation.

Such a situation has also recently unfolded in India with much media fanfare surrounding it – specifically regarding the abbreviation KSRTC. For people living in the states of Karnataka and Kerala, the said abbreviation denotes two very different things – the Kerala State Road Transport Corporation for Kerala; and Karnataka State Road Transport Corporation for Karnataka. Thus, it was inevitable that a dispute would arise at some point of time.

It has been recently been reported by many leading news outlets in India that a trade mark dispute has been going on between the Kerala State Road Transport Corporation (“Kerala”) and Karnataka State Road Transport Corporation (“Karnataka) regarding usage of the abbreviation KSRTC, which is the short-form/abbreviation for the full names of both organizations. It has been reported that a dispute regarding the trademark over the abbreviation KSRTC has been going on for over the last 7 years. The dispute purportedly when Karnataka filed an application for the mark KSRTC and apparently called upon Kerala to not use the acronym KSRTC further[1]. Both corporations had been using the said acronym for decades, thus cementing their reputation and goodwill in their respective states. Kerala purportedly commenced use of the acronym/abbreviation in 1965 whereas Karnataka commenced use of the same in 1974. In light of this background, Kerala has recently claimed that the Trade Marks Registry in its ‘verdict’ has given them the right to use the abbreviation KSRTC, the emblem as well as the nickname ‘Anavandi’, In response, Karnataka has claimed that it has not received any such Order and is exploring legal options[2]. However, it has been further reported that both Kerala and Karnataka have valid and subsisting trade mark rights in the abbreviation KSRTC and the trade mark rectifications filed by Kerala against Karnataka’s registrations before the IPAB (now deemed defunct/abolished) are still pending[3].

IP RIGHTS INVOLVED IN THE DISPUTE

In view of the above myriad of claims and allegations and justifications, it is important to ascertain the various IP rights involved in this matter: 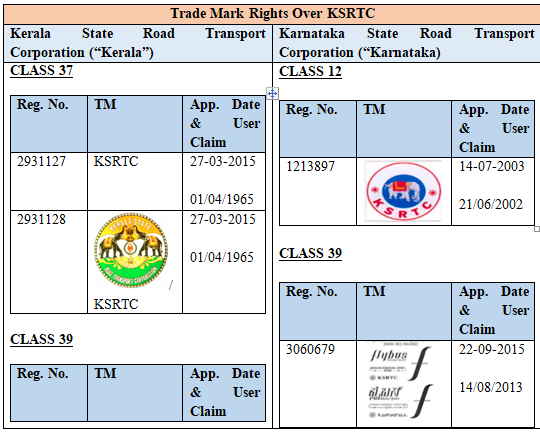 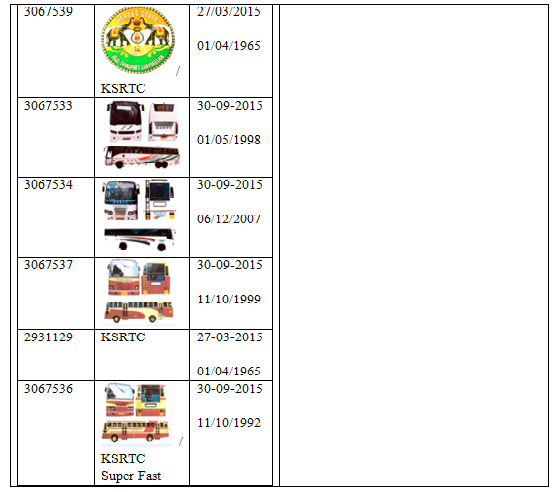 From the above trade marks, it is evident that Kerala State Road Transport Corporation (“Kerala”) prima facie has the upper-hand from a trade mark perspective, as well as the fact that their claimed use stretches back to 1965, i.e. date of conversion of the erstwhile Travancore State Transport Department to the Kerala State Road Transport Corporation in 1965[4]. Further, it is also pertinent to note that both entities have co-existing registrations over the KSRTC abbreviation/mark in class 37, although Kerala possess a word-mark registration as opposed to Karnataka’s device mark  in the said class. However, KERALA had filed rectification against KARNATAKA’S aforementioned trade mark registration no. 1213897 for the mark  with the IPAB Chennai, vide ORA/166/2015/TM/CH/5533 in 2015. It has been reported that the rectification is still pending and now the same has been transferred to the High Court due to the dissolution of the IPAB.

As both entities have been using the abbreviation KSRTC for a very long time and both have valid and subsisting registrations over the said mark, one of the most important facts of such cases would be priority of use.
It has been reported that Kerala trumps Karnataka in this respect, as the use of the abbreviation by Kerala dates back to 1965 whereas Karnataka can establish its use from the mid-1970s only.

However, while the rectification is still ongoing, and there prima facie there does not appear to be any further legal escalation, it is important to explore two very relevant questions brought up by this dispute –

Can such Abbreviations be registered as trademarks?

There is no specific prohibition in the Trade Marks Act, 1999, which restricts such trade marks. Further, in case the abbreviation in question has acquired a secondary meaning, i.e. immense reputation and goodwill, then the chances of obtaining such registration would indeed be fair. In fact, the Registry has indeed registered many abbreviations in the past, such as VIT and M&M – please refer to our earlier article on this topic at https://ssrana.in/articles/india-conflict-and-ruling-on-bonafide-use-of-acronym-as-trademark/.
However, registrability aside, issues would undoubtedly arise if the said acronym/abbreviation is being used to similar/identical services – as was the case in the KSRTC matter.

Can such marks co-exist?

Marks such as the one in question, if it clears the hurdles of Sections 9 of the Trade Marks Act, 1999 can indeed co-exist, and the same is indeed provided for in the statute itself, in the form of Section 12:

As such, in view of their long, continuous, uninterrupted and bonafide use, both parties may have valid rights over the abbreviation.

Coupled with the above factum, it is pertinent to shed some much deserved spotlight on the highly debated concept of secondary meaning. While the mark/abbreviation KSRTC in itself may lack distinctiveness, it can be said that the said abbreviation has acquired a secondary meaning within Kerala and Karnataka. Considering the length and scale of use, and the nature of services, it is likely that the abbreviation KSRTC denotes very different things, i.e. the respective states’ buses/ corporation, to citizens of the two states.
As such, the mark may be said to have a secondary meaning at least within the confines of the respective states.

The present dispute regarding the KSRTC raises a question which goes beyond the question of registrability of marks. In the present case, both Kerala and Karnataka have valid and subsisting rights over the said term/mark and the mark can be said to have acquired distinctiveness and secondary meaning in their respective states. Both organizations have been using the mark for decades, seemingly unopposed till 2015. Both organizations have registered their marks with the Trade Marks Registry, and the latter user, i.e. Karnataka, can be said to be honest and bonafide user of the mark.

As such, in these cases, an acceptable compromise may be to register such marks with strict disclaimers which bind the usage to a certain geographical territory. The Registry for a long time has been known to grant registrations with disclaimers regarding location – for example registering marks with the disclaimer that the same shall be solely for services pertaining to the state of Karnataka/ Kerala. Thus, this solution would not only permit entities such as Kerala State Road Transport Corporation (“Kerala”) and Karnataka State Road Transport Corporation (“Karnataka) to use and register their trade marks, but also prevent undue monopolization of an abbreviation which may be of use to others also. However, the above solution may not be practical in this particular case, considering that Kerala and Karnataka are neighbouring states and buses of each organization ply in either state. Thus, another solution in such cases would be a compromise wherein one organization uses a highly stylized logo to differentiate its mark from the others’, or uses dots/periods between the alphabets, i.e. K.S.R.T.C.

Additionally, it is noteworthy in this matter that the final disposal of the trade mark rectification/cancellation action in favour of Kerala would not per se bar Karnataka from using the KSRTC abbreviation/mark, as has been claimed in the media. The actual usage of the mark by one party can only be addressed if a lawsuit is filed and they are restrained by a court from using the mark.

India: ‘Be U’ Bengaluru Becomes India’s First City to Have Its Own Logo