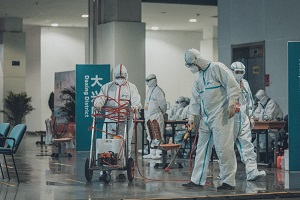 By Ragini Ghosh and Pranit Biswas

With India currently engulfed in an all-encompassing firestorm that is the second wave of the COVID-19 pandemic, a corresponding new wave of counterfeiters have emerged side by side, who are trying to benefit from the desperate demand for COVID medicines, by selling counterfeits of life-saving drugs, including the critical Remdesivir.

While the nation grapples with this unprecedented human tragedy and loss of life, the last few weeks have seen a rise in counterfeiting of such drugs, as evidenced by the many recent instances of law enforcement nabbing such counterfeiters. Recently on April 17, the Bengaluru police arrested a counterfeiter who was purportedly trying to sell counterfeit Remdesivir in the black market for an exorbitant sum of Rs. 14,000/- per vial. There have been a spate of such incidents which have been reported in the Indian media. It is heart wrenching to see that counterfeiters are not even sparing those in desperate, life-threatening condition during this human catastrophe to reap illegal profits. Similar incidents have also been reported in Pune, Indore, Mumbai, etc., thereby showing the alarming degree of proliferation of such unscrupulous activities. In addition to acts of counterfeiting, there have also been reports of crude attempts to even try and pass-off saline water as Remdesivir!

It is therefore becoming increasingly imperative at this time that the general public be made aware of basic due diligence measures that can be conducted to try to spot fake medicines, especially critical care drugs such as Remdesivir at a time when there appears to be NO HONOUR amongst thieves, (unlike what the title of Mr. Archer’s namesake novel would have us believe!) 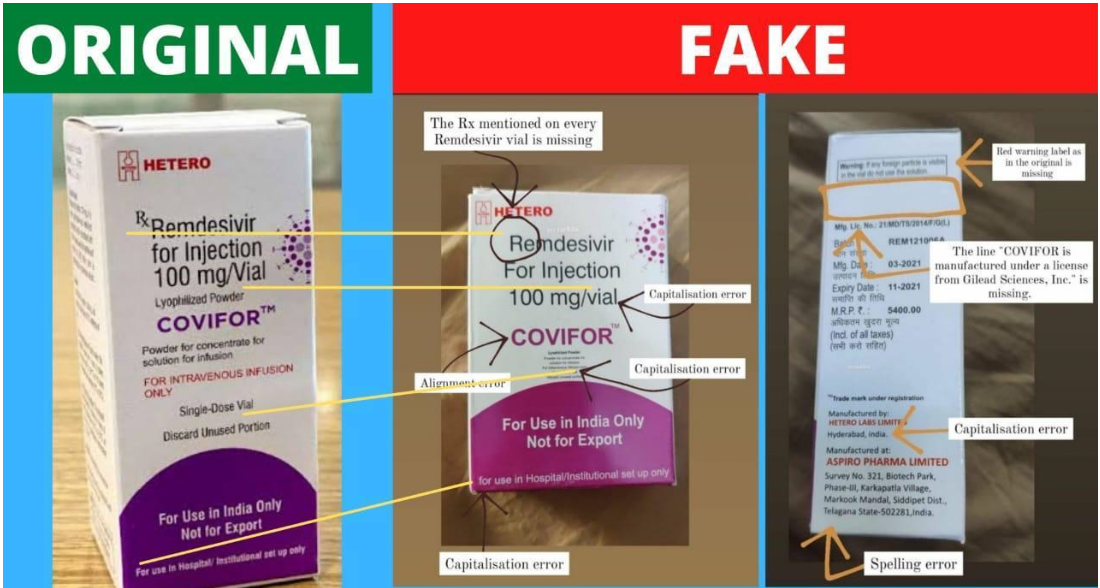 Remdesivir in India is manufactured by several pharma companies, one of the principal of which is Hetero Healthcare Limited, a Hyderabad based pharmaceutical manufacturer, marketing the drug under the brand name COVIFOR. A senior officer of the Delhi Police recently released comparative photographs and tips about how to spot fake COVIFOR from original over Twitter. The same is being shared below for increasing the visibility of such information, which may turn out to be the difference between life and death, when battling COVID-19.

How to spot fake COVIFOR from original?

It is hoped that the above non-exhaustive list of pointers will help the general public to exercise vigilance and be able to distinguish counterfeit pharmaceutical products from real ones. In addition, consumers must also be mindful of the below factors:

Considering the scale and magnitude of this second wave of COVID-19, it is also important to be equally vigilant while buying critical PPE (Personal Protection Equipment) such as gloves or masks. In this regard, you may access our earlier articles on the said topic at https://ssrana.in/articles/proliferation-of-counterfeits-during-covid-19-lex-witness/ and https://ssrana.in/articles/rise-of-counterfeit-ppe-india-covid-19/.