By Ananyaa Banerjee and Ragini Ghosh

As observed by Justice Singh in the judgement,

The non-traditional trademark in question in the present case was the ‘Arcuate Stitching Design’ mark, duly protected under trademark registration no. 851939, belonging to Levi Strauss & Co., and an ubiquitous feature on all of their jeans: 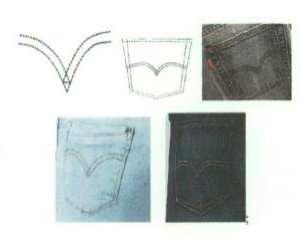 Since 1873, Levi Strauss & Co. has been a pioneer in the development of denim pants most popularly known as “jeans”. Levi Strauss & Co. and Jacob Davis were granted a patent in the United States for an “Improvement in Pocket-Opening Fastenings” as far back as 1873, namely for riveted pockets, and making work pants stronger and more long lasting for working men. The brand has since revolutionized casual clothing with iconic and innovative styles, still being carried on today, and has emerged as one of the most popular brands in clothing worldwide with astonishing customer recall. Levis jeans and garments, under its various trademarks and brandings are widely available in mass-channel retail stores around the world, including all over India, providing value-conscious consumers with products from a company with a history of producing high-quality clothing.

Imperial Online Services Private Limited is a private company that was incorporated on 10 July 2012 and is not publicly traded. It is a private limited company with its headquarters in Hyderabad, Telangana. The company’s four (4) directors were also impleaded as defendants in the present case.

Plaintiff, Levi Strauss & Co. filed a suit before the Hon’ble Delhi High Court seeking a permanent injunction restraining trademark infringement, copyright infringement, passing off trademark, and other reliefs in respect of the ‘Arcuate Stitching Design‘ mark, including prayer for the non-traditional trademark in question, namely the ‘Arcuate Stitching Design‘ mark, to be declared as ‘well-known’ within the provisions of Section 2(1)(zg) of the Trade Marks Act, 1999.

According to the Plaintiff, the said mark was adopted in 1873 and is used on all textiles, including denim jeans, which the Plaintiff manufactures and sells.

Being aggrieved by the Defendants’ conduct of selling denim jeans featuring the identical ‘Arcuate Stitching Design‘ mark over various e-commerce platforms such as Amazon, Flipkart, Myntra, Snapdeal, LimeRoad, Nykaa Fashion, Paytm Mall, and www.urbanofashion.com, the Plaintiffs had issued legal notices to the Defendants. Thereafter, in compliance thereto, Defendants had executed undertakings as of February 16, 2021, inter alia acknowledging the Plaintiff’s rights in the ‘Arcuate Stitching Design‘ mark  and, in recognition thereof, promising to cease all use of the said mark and remove all goods bearing the impugned mark from circulation within six (6) months thereof (i.e. by 15 August 2021). However, despite so undertaking, the Defendants had been found to be continuing to manufacture and sell denim jeans bearing the Plaintiff’s ‘Arcuate Stitching Design‘ mark, leading to the Plaintiff being forced to file the present suit before the Hon’ble Delhi High Court in order to protect their rights.

On 22nd December, 2021, upon being satisfied with the Plaintiff’s prima facie case, the Court had granted the Plaintiff an interim injunction, inter alia prohibiting the Defendants from manufacturing, marketing, offering for sale, and selling, whether directly or indirectly, and whether on the internet or otherwise, any goods, most notably denim jeans, bearing the the Plaintiff’s ‘Arcuate Stitching Design’ mark.

The Defendants had filed a written statement requesting an initial extension of six months for the disposal of the stock, but the same could not be adhered to diligently due to the pandemic period and associated lockdowns. However, the Court had prohibited the Defendants from infringing the Plaintiff’s mark, and that even the exhibition of images attributed to the Defendants on e-commerce platforms would violate the Court’s injunction order.

Defendants had submitted that they are willing to suffer permanent injunction against use of the impugned mark, however object to the damages amounting to 8.5 lakhs as being claimed by Plaintiffs.

Whether a stitching pattern is protectable as a Trademark?

The Plaintiff had sought protection for the ‘Arcuate Stitching Design‘ mark, being encompassed under Section 2(m) of the Trademark Act, 1999, which defines a (trade)mark as being: “ a device, brand, heading, label, ticket, name, signature, word, letter, numeral, shape of goods, packaging, or combination of colours or any combination thereof;”.

Plaintiff referred to the ruling passed in Lois Sportswear, USA, Inc. v. Levi Strauss & Co., 631 F. Supp.735 (S.D.N.Y. 1985), wherein the United States District Court for the Southern District of New York had held as follows: “Based on the foregoing analysis, Levi’s arcuate mark is a strong mark that qualifies for a high degree of protection.” Apart from its indisputable registration as a trademark, the Levi’s ‘Arcuate Stitching Design‘ mark was held to be a fanciful design that serves no purpose other than as a source indicator. Thus, the US District Court determined that the ‘Arcuate Stitching Design’ mark is fanciful and deserving of protection as a registered trademark and their decision was further upheld by the United States Court of Appeals, Second Circuit in Lois Sportwear, U.S.A., Inc., v. Levi Strauss & Co. 799 F.2d 867 (1986).

In the further referred case of Levi Strauss Co. v. Abercrombie Fitch, 633 F.3d 1158 (9 th Cir. 2011), the United States Court of Appeals, Ninth Circuit, had recognized Plaintiff’s unarguable rights in the value of their trademark, the ‘Arcuate Stitching Design’ mark, as clothing bearing the said mark had amounted to 95% of their total revenue over the past thirty (30) years!

The court, in the present case recognized the Plaintiff’s registered and valid statutory trademark rights in the ‘Arcuate Stitching Design’ mark, globally as well as in India, and were pleased to decree the matter in favour of the Plaintiff, as Defendants had already submitted to permanent injunction, and awarded nominal costs (to the tune of 4 lakhs) to the Plaintiff, in order to bring an end to the matter expeditiously. Furthermore, a decree declaring the said mark to be a ‘well-known’ mark was passed.

The present case is an extremely lucid recognition of non-traditional trademarks and looks set to be cited and relied upon in future matters pertaining to similar subjects. That a stitching design, incorporated only as a pattern upon clothing can serve as a source identifier will open the doors for other source-indicating patterns to be recognized as (non-traditional) trademarks and offer much needed protection against infringement of the same, especially since the clothing and fashion industry is susceptible to rampant counterfeiting. Additionally, its declaration and inclusion in the Registry’s list as a well-known trademark is also welcome for such an iconic design element.

The court’s stance in taking a strict stand against online use of the impugned mark is also a relief to rights holders because it is a common problem for infringers to plead inability/delay in taking down infringing images online as compared to assuring that physical misuse has ceased, which is more difficult to verify, and thereby continue to infringe registered trademarks by surreptitious online sales.

IMPORTANCE AND CHALLENGES OF PROTECTING A PATTERN MARK