India: Revised Rates of Minimum Wages with Effect from October 01, 2016 in Delhi

Prior to the order dated September 30, 2016, the minimum wage rates applicable in Delhi were Rs. 9,568 for unskilled categories of workers, Rs.10,582 for semi-skilled workers and Rs.11,622 for skilled workers.

The Govt. of NCT, Delhi has now after adjusting the average Consumer Price Index Number of the period from January 2016 to June 2016 which is 271.17 (an increase of 4.34 points) declared the following Dearness Allowances payable to all categories of workers w.e.f October 01, 2016.

Further, the order prescribes the following rates of minimum wages payable to Clerical and Supervisory Staffs in all Scheduled employments:

The following rates of minimum wages shall be applicable in employment in establishments where the workers are given facilities of meals of lodging or both by the employer: 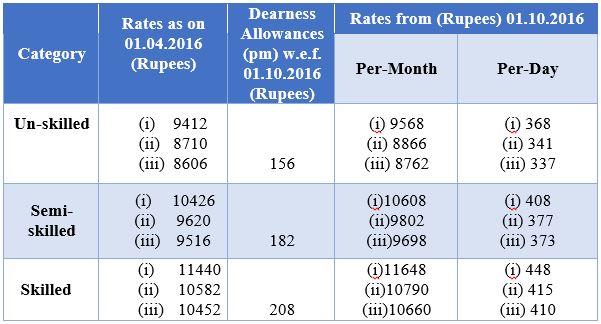