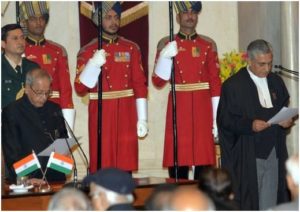 Justice T.S. Thakur being sworn-in as the 43rd Chief Justice of India by President Pranab Mukherjee at the Rashtrapati Bhawan, in New Delhi on December 03, 2015
Image source: The Hindu

Justice Tirath Singh Thakur was sworn in as the 43rd Chief Justice of India (CJI) on December 03, 2015 by the President of India, Sh. Pranab Mukherjee, at the Rashtrapati Bhavan in New Delhi, India.

Justice Thakur, at 63 years, is the senior-most judge of the Supreme Court of India, and he succeeded Justice H L Dattu who retired on December 02, 2015.

As a Supreme Court judge, he has headed the bench delivering significant verdicts pertaining to reforming the cricket controlling body BCCI in the wake of allegations of betting and spot-fixing scandal in the Indian Premier League, probe into the multi-crore chit fund scam known as Saradha scam, and the multi-million rupee NRHM scam, in which ex-UP minister Babu Singh Kushwaha is also an accused, besides other politicians and bureaucrats, to name a few.

Earlier, CJI Thakur was appointed as a permanent judge in September 1995 and transferred to the Delhi High Court in July 2004. He was later appointed as acting Chief Justice of the Delhi High Court on April 9, 2008 and on August 11, 2008, he took over as Chief Justice of the Punjab and Haryana High Court. He was elevated as a judge of the Supreme Court and assumed charge on November 17, 2009.