By Vikrant Rana and Diksha Singh

For decades now, people all around the world have been bewitched by the wonderful wizarding world introduced by Ms. Joanne Kathleen Rowling through the HARRY POTTER® books, which were brought to life by the Warner Bros. Pictures. Children, for over two decades, have waited years for their own Hogwarts® letters – the invitation to attend the prestigious Hogwarts School of Witchcraft and Wizardry, where Harry and his best friends have had many an adventure; and since one cannot simply walk into Diagon Alley (or in Mordor!), fans have to make do by participating in numerous pop culture conventions and attending book / movie events, just to feel like they belong in the wizarding world. Naturally, many would jump at the opportunity to dine in eateries inspired by the wizarding world, just to bask in the fictional universe associated with the Harry Potter books and movies. Such is the popularity of the wizarding world that correspondingly, it is a quick recipe for commercial success, by setting up “inspired” restaurants and cafes, offering fans an opportunity to participate in the magical world, and earn a few galleons in the process, perhaps not realizing that the same violates various IP rights vesting in the Harry Potter world.

One such recent instance was in the case of Warner Bros Entertainment Inc. v. Mr Ishant Kashiwal trading as the Hogwarts Kafe & Ors.[1], where the Plaintiff (the registered proprietor of the Harry Potter trade marks worldwide and in India), brought a suit for injunction and damages for infringement, passing-off and unfair competition against the Defendant and their use of the name THE HOGWARTS KAFE and other related WIZARDING WORLD PROPERTIES in respect of the Defendant’s café / restaurant.

RIGHTS THAT MAY BE AFFECTED BY SUCH THEMED EATERIES:

In what has apparently become a common phenomenon, individuals have started coming up with themed eateries, which are “inspired” from famous books, movies and even TV shows.

Apart from the unlikely event that proprietors of themed restaurants have indeed obtained a trade mark or copyright license from the registered proprietors / owners of such rights to use these IP-protected works in respect of their eateries, such themed eateries may give way to a plethora of IP-right violations, even though they may have been commenced with good intentions (to offer fans a glimpse of what it means to be a part of a fictional world):

Coming back to the present case, let us analyse the different IP rights that appear to be violated by the Defendant: 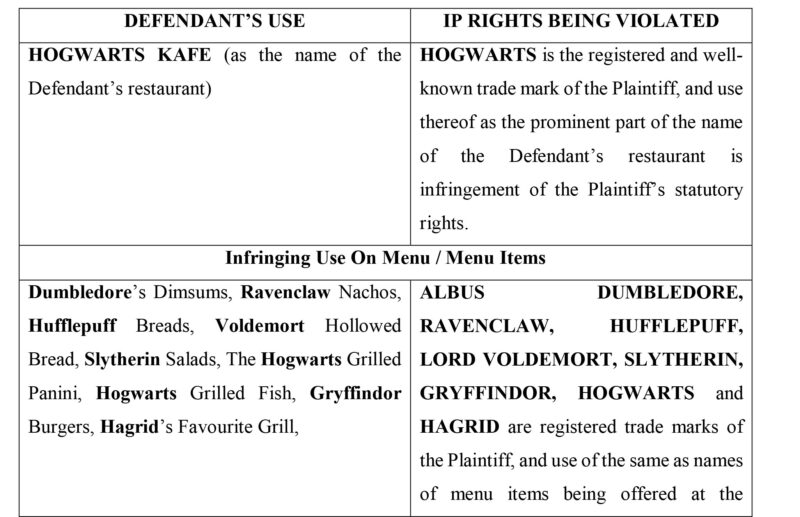 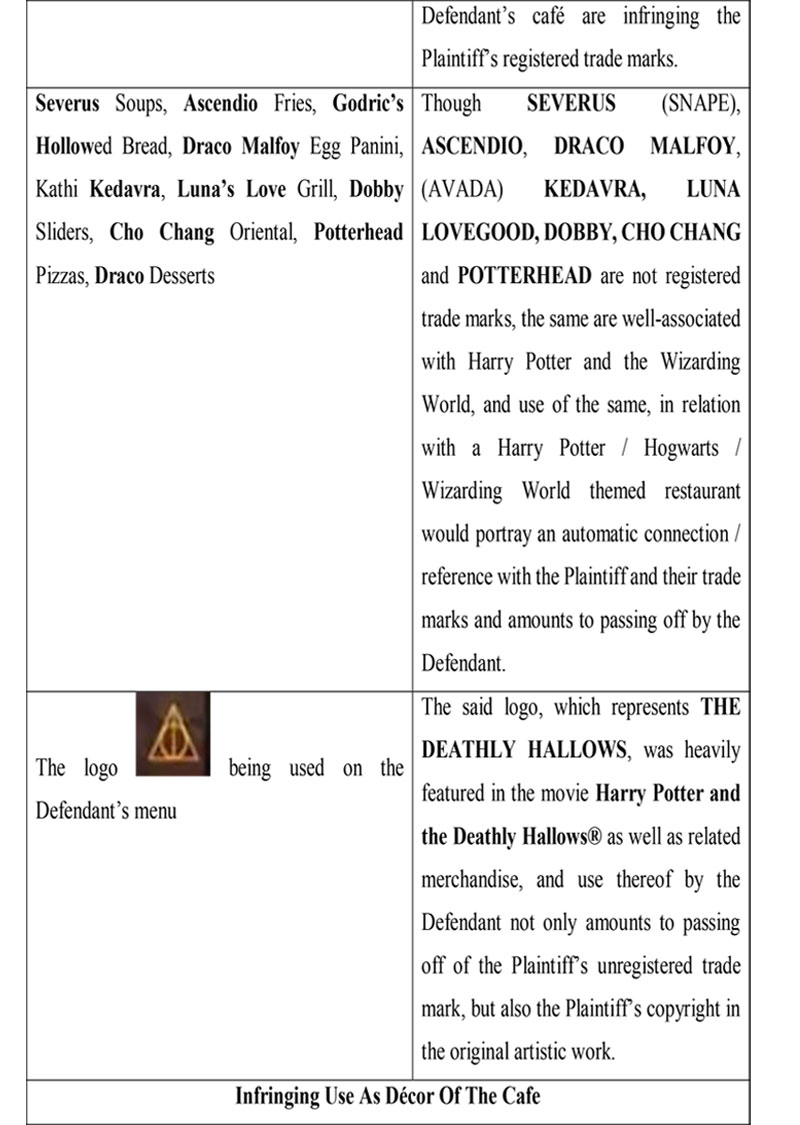 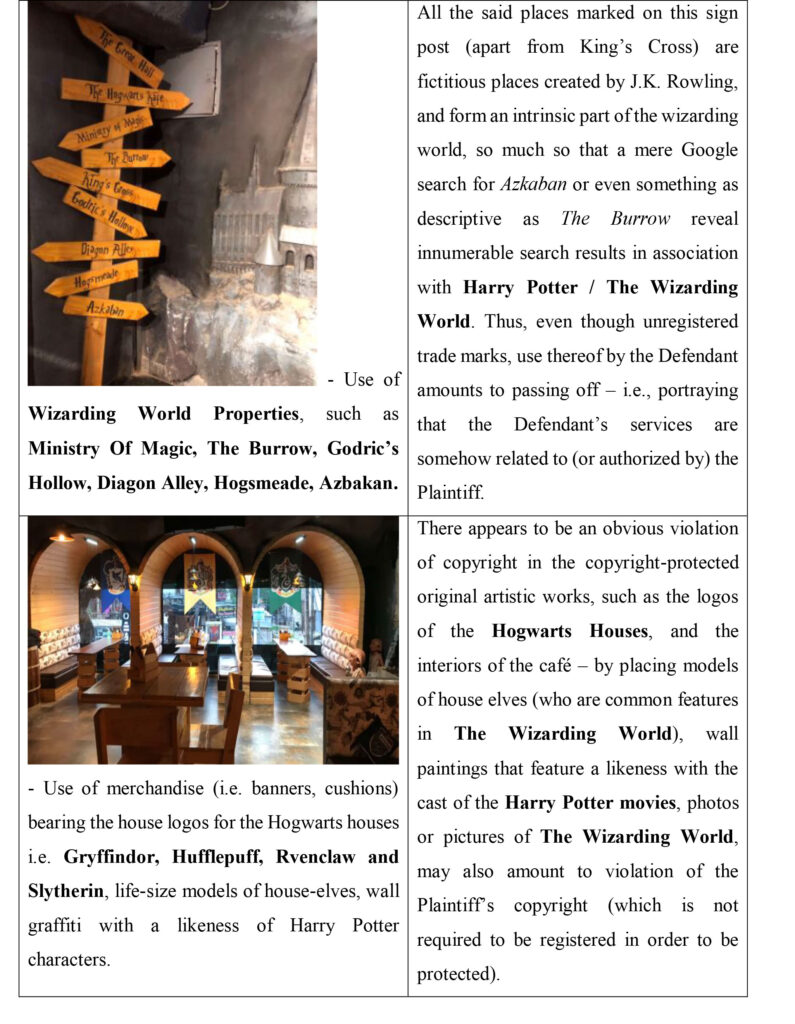 On account of finding a prima facie case in favour of the Plaintiff, the Hon’ble Delhi High Court granted an ex-parte ad interim injunction in favour of the Plaintiff, thereby restraining the Defendant from using the marks THE HOGWARTS KAFE and THE WIZARDING WORLD Properties in respect of their restaurant, and take down its advertisements and listings from third-party websites / social media.

Other instances of themed eateries / cafes include F.R.I.E.N.D.S. themed Central Perk cafes (inspired from the Central Perk café in the extremely popular sitcom F.R.I.E.N.D.S.), in Kolkata and Delhi, which featured the orange couch (as featured in the sitcom), the dog statue owned by the characters Joey and Chandler, the distinctive purple door, and the words “Central Perk” as they appeared on the café’s window in the show.

Another incredibly famous TV show that has inspired a host of themed eateries, is GAME OF THRONES, and such themed restaurants have cropped up all around the world (and even in India), featuring a wide variety of famous elements from the show, like the Iron Throne, House banners, character posters, dishes and drinks names after characters and places, and so on!

WHAT’S NEXT FOR HOGWARTS KAFE?

In the instant case, the Hon’ble Court issued summons to the Defendant, indicating that the Defendant is to file the written statement to the suit within thirty days of receipt thereof, alongwith an affidavit of admission / denial of documents filed by the Plaintiff.

As directed by the Hon’ble Court, the matter was taken up by the Joint Registrar on November 26, 2021, wherein the Defendants stated that they had complied with the High Court’s order dated September 17, 2021, and both parties thereafter requested that they wished to settle the matter in Mediation. Therefore, the Learned Joint Registrar has directed both parties to appear before the Delhi High Court Mediation and Conciliation Centre on December 15, 2021, and has listed for report of settlement on February 22, 2022.