The Department for Promotion of Industry and Internal Trade (DPIIT), Ministry of Commerce and Industry recently released its much awaited Annual Report for the year 2020-21[1]. The Report is a compendium of various activities performed by the DPIIT, its role and functions concerning matters relating to Protection of Intellectual Property Rights (IPR), matters relating to Foreign Direct Investment (FDI) and also promotion of investment for the industrial development of the country. As such, the report is of great interest to not only Indian citizens, but foreign stakeholders. The Report also provides valuable insight about the Startup India Initiative, the National IPR Policy and the National Design Policy.

One of the most interesting tid-bits released by the DPIIT vide their report was that during the financial year 2020, more than 17,000 patents were granted in India till November! [2]

The report also provided valuable statistical breakdown of the number of patents filed in India till December 31, 2020, and details thereof are given below: 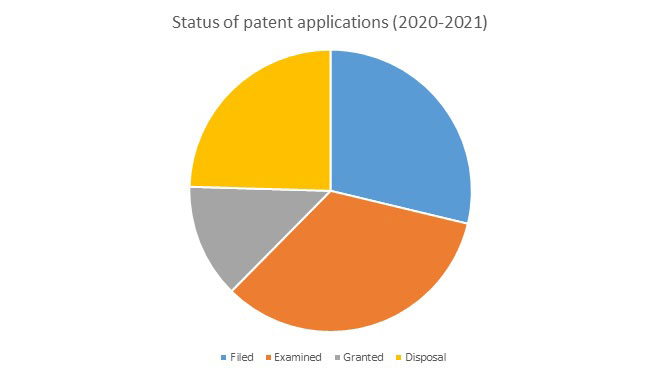 Patents Filed by Start-ups in India 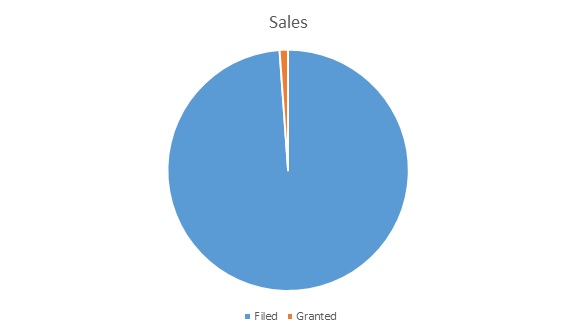 Another vital statistic which is directly indicative of the growth of IP and patents in India is the fact the number of patent applications per annum as filed by start-ups has steadily increased over the last few years, as is evident from the below data: 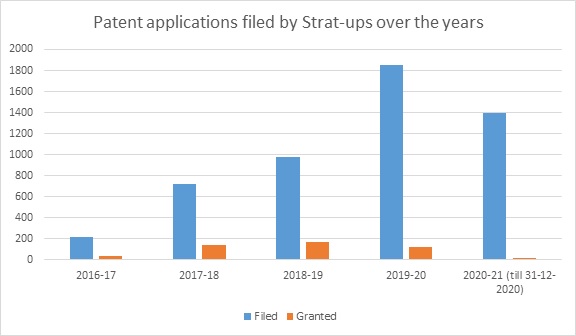 SIPP Scheme for Startups in India

The Scheme for facilitating Start-ups Intellectual Property Protection (SIPP) implemented by the Office of the CGPDTM was launched in 2016 to encourage the innovation and creativity of start-ups, and the Scheme has now been extended up to March 2023. This is a very important positive development for start-ups in India, who would hopefully be emboldened to actively protect and monetize their inventions.

The Scheme provides for the appointment of IP facilitators who facilitate start-ups in filing and processing their applications for patents, designs and trademarks and professional charges for the services provided by IP facilitators is reimbursed by the CGPDTM under the provisions of the SIPP scheme.[4]

DPIIT also mentions in its Report that Infrastructure upgradation, manpower augmentation, regulatory reforms and IT enablement have resulted in speedy disposal of intellectual property application. During the time of pandemic, when Covid-19 has taken a troll over almost every sector, electronic filing system for filing patent applications has aided in filing and disposal of patent applications in India.[5]

The Startup ecosystem in India is expanding its realm by leaps and bounds, and it is heartening to see evidence of the same, which is the steady increase of patent applications filed by start-ups over the last few years. However, the awareness of IP filings and protection in Startups is still at a comparatively nascent stage as compared to those  of developed countries, however, it is hoped that such steady progress would help India leapfrog many other countries as the Innovation Hub of the world! The Government through the SIPP Scheme and legislative amendments has certainly endeavoured to make IP filings by Startups conducive and thereby promote innovations and IPR protection of innovations.