The most awaited season of Money Heist was released on Netflix last week, and as expected, the epic Spanish show’s penultimate season turned out to be one of the most popular shows on the streaming service and is currently trending on #1. The final season lived up to the hype, and the same was replete with twists and turns, that’s all we will say about it! #NoSpoilers.

Over the years, not only have the characters gained fame, their attires, the ‘masks’ as well as the song ‘Bella Ciao’ featured in the series, have become viral and gained immense popularity worldwide.

As such, this worldwide phenomenon that the show is, and especially the featured track ‘Bella Ciao’, has been widely appropriated (or rather mis-appropriated!) by the Indian market, and a niche (read: counterfeit) market has been made out of it – be it for a name of an Italian restaurant or for a caption in clothing items, the title Bella Ciao is up for grabs!

On a lighter note though, one such viral video trending on YouTube is of a devotional troop singing the song Bella Ciao in a gathering with a Gujarati twist, thereby corroborating the immense popularity of the song and the various ways the same is being capitalized on! (check the link https://youtu.be/TEu_R-noXX4 ) 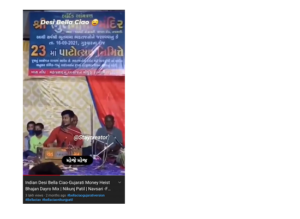 This is a classic example of moment marketing (read our earlier article on the subject matter here, regarding moment marketing at the time of the Tokyo Olympics), wherein brands, in order to gain some traction and to and broaden their market/ customer base at marginal costs, capitalize on trending topics (in the present case, the show Money Heist and the featured track  Bella Ciao being the “moment” or the hip trend) and tailor their goods/services and advertising thereto, by piggybacking on the crescendo of the said trending topics.

Another such instance of moment marketing can be traced back to 1996 when Coca-Cola bagged the official sponsorship rights to the Wills (Cricket) World Cup, and in response Pepsi came up cheeky theme “Nothing official about it” which turned the apparent disadvantage of losing the battle for the sponsorship to Coca Cola into a massive win for Pepsi and became the anthem for the age.

Therefore, by adopting such a method of marketing, brands are brought up in consumer conversations and hence they piggy back on the ongoing trendy topics of the moment quite effectively. It is a simple, but smart marketing move which attracts a lot of attention without splurging on other more traditional marketing techniques such as through campaigns or paid promotions.

Right on the band wagon of moment marketing, Pepsi recently launched its limited-edition golden cans & packs celebrating the final season of the series Money Heist in collaboration with Netflix. The golden cans & packs feature the iconic elements from the hit series – the ‘Dali mask’ and the term ‘Bella Ciao’, consequently attracting  and tempting the entire fandom to buy the limited edition can which may also be kept as collector’s items. As part of the promotional campaign, Pepsi went a notch ahead and added a QR code on the cans which will direct all the consumers to a virtual fan event hosted by Netflix for celebrating the final season. Photographs of the said Pepsi cans/ bottles are reproduced below: 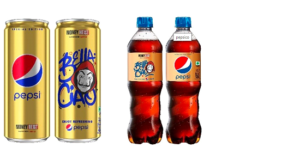 However, a further step ahead are those brands who get the ongoing trends registered and trademarked, in an attempt to gain monopoly over the said niche market! Over the years, it has been a general practice to register marks stemming out of such ‘trends’, be it a positive event or a tragedy, which was unfortunately seen in the case of attacks of November 26, 2008 in Mumbai, the infamous and horrific Nirbhaya rape case, or the MH17 Malaysian Airlines tragedy (click here for our earlier article on such trademarking trends).

With the ongoing streaming of the Money Heist seasons over the past few years on Netflix, many people have filed applications for the mark Bella Ciao not only internationally but also in India as well, wherein applications have been filed especially after 2017 (i.e. when the first season of the famous Spanish show was released on the platform Netflix). However few applications were filed prior to the Netflix series, which prima facie indicate honest and bonafide adoption. After all, it also has to be kept in mind that Bella Ciao is a common Italian saying, and the song itself is a very old folk-song.

Some notable examples of the same in India have been tabulated below:

A representative sample of some such applications for ‘Bella Ciao’ filed internationally is also provided below: 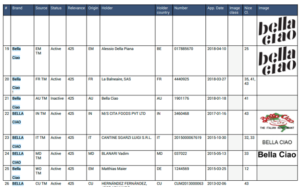 The applications span over a variety of classes and few of them have been registered as well. However, the specific application for the mark

has not only incorporated the title Bella Ciao in toto, that too in the distinctive red colour-combination so famously associated with the series, but has gone a step ahead and added the ‘Dali Mask’

which is so intricately associated with Money Heist, therefore in every sense associating itself to the series when they likely have no association whatsoever. Moreover, the said Applicant, while distinguishing itself from the conflicting ‘Bella Ciao’ marks cited on the examination report/ office action, has claimed to be different on the grounds of incorporating the ‘Money Heist Dali Mask’ thereby clearly stating the fact that the same has been copied from the series!

Therefore, it is evident that the Applicant intends to associate itself with the famous Netflix series, and such a portrayal in the long run, will inevitably add fame to the actual business for which the mark is used (HINT: the application has been filed in class 30 for foodstuffs, and in 43 for restaurant/ café related services!).

At present Netflix has trademark rights on the mark ‘Money Heist’. Given that the term Bella Ciao is from an Italian protest folk song from the late 19th century and is sung worldwide as an anti-fascist hymn of freedom and resistance, it would be difficult for someone to claim monopoly over the same. However, the present resurrection of the song via the Netflix Series has triggered multiple trade mark applications over the years.

Keeping the aforementioned trend in mind, brand owners have to be vigilant and informed enough to understand the gravity of the issue arising out of such third-party trademark application. Once gone out of sight, i.e. such marks getting registered, there is no going back, as the brand owner at that stage would have to resort to more lengthy and expensive procedures like trademark cancellations or lawsuits, in order to safeguard their rights, wherein a simple Cease & Desist Letter or Trademark Opposition would have sufficed.

Hence, please do register your marks! You may never know, your mark may be up for the next great heist!!

For more information, please write to us at: info@ssrana.com

This article was first published on Bar and Bench- here