On May 27, 2016, Manchester United F.C. confirmed that Jose Mourinho has been appointed as their new manager. The announcement had been widely expected to arrive sooner, but was delayed due to an unexpected roadblock – Mourinho’s image rights.

Prior to signing for Manchester United, Jose Mourinho had two spells as the manager of Chelsea Football Club. He first joined them at the back of achieving unforeseeable success at Porto, in 2004. His first season at Chelsea saw him winning the Barclay’s Premier League title with a record 95 points tally. Therefore, Chelsea decided to capitalize on his rapidly increasing popularity and reputation by applying for registration of a trademark over his name, in 2005. The registration was applied for, at the European Union Intellectual Property Office (EUIPO) on March 31, 2005, and was obtained on May 29, 2006. The registration was obtained for five classes of goods, with its expiry due on March 31, 2025. Following is a brief description of the goods covered under the five registered classes:

Obtaining a trademark over a personal name is allowed under European Union law. Council Regulation (EC) No 207/2009 of February 26, 2009 on the European Union trade mark gives the definition for EU trademarks: “An EU trade mark may consist of any signs capable of being represented graphically, particularly words, including personal names, designs, letters, numerals, the shape of goods or of their packaging, provided that such signs are capable of distinguishing the goods or services of one undertaking from those of other undertakings”.

Chelsea also obtained a trademark over Jose Mourinho’s signature in 2006. Having obtained the rights over commercial exploitation of Mourinho’s name, Chelsea continued to hold these rights even after terminating his employment twice. This is a situation which is more or less unheard of, with Chelsea being designated as the owners of the European as well as UK trademark, and being capable of commercially exploiting the same till 2025, regardless of which other Football Club Mourinho joins.

Even after registration of his name by Chelsea, Mourinho had left Chelsea twice and was in charge of Italian club Internazionale and Spanish powerhouses Real Madrid. Chelsea’s trademark has not hindered his managing in either of those clubs and may not be a barrier this time too.

Eminent sports lawyer Carol Couse told BBC Sport that it was “really unusual” for an individual not to own the trademark to their own name, and she believes that Manchester United will pay a six-figure sum to license its own coach’s name, because it will be worth it to sell the merchandise. In order to get over this hurdle, the following options were available to United:

Details of Chelsea’s registration of the “JOSE MOURINHO” trademark at the EUIPO: 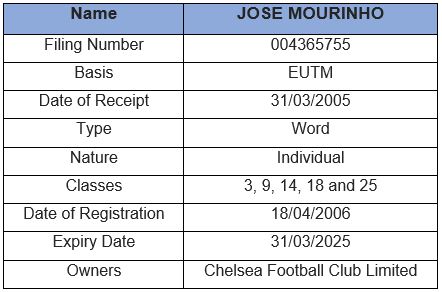