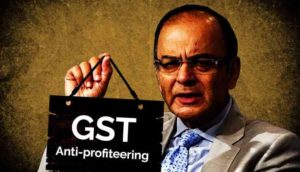 The Anti Profiteering Rules, 2017 (Rules) were recently notified by the Central Government in exercise of its powers under section 164 read with section 171 of the Central Goods and Services Tax Act, 2017. Herein, as enumerated in Section 171 of the GST Act, any reduction in rate of tax on any supply of goods or services or the benefit of input tax credit shall be passed on to the recipient by way of commensurate reduction in prices. These Rules have been however touted as ‘draconian’ by many that threatens businesses with cancellation of registration if they are found guilty of profiteering.

As under Rule 7, businesses will have to pass on the benefits of GST to consumers, failing which if they are found guilty of profiteering, their registration may be revoked.

Further, the Authorities will determine if the benefits have been duly passed on to the recipient and at the same time ensure to recover the amount not returned if the eligible recipient does not claim such return or if the recipient cannot be identified. The standing committee and screening committee are responsible to affirm if any interested party has a claim.

Summary of the Rules

As under these Rules, the constitution of a National Anti-Profiteering Authority, Standing Committee, and a state level Screening Committee is duly enumerated. The Authority will have the power to determine the method and procedure for determining the reduction in rate of tax on supply of goods/ services or benefit of input tax credit has been passed on by the registered person to the recipient by way of commensurate reduction in prices. Hereunder, it is the duty of the Authority, under these Rules to determine whether benefits have been passed to the recipient.

Since the Standing Committee has the onus to identify if the supplier hasn’t passed benefits to the recipient; in such case, the committee shall refer the matter to the Director General of Safeguards for investigation. The Director General will have to notify the interested parties under these Rules regarding initiation of any investigation proceeding.

Further, the Director General shall complete the investigation process within a period of 3 months from the date of receipt of reference from the standing committee. The same may get extended not beyond a further period of 3 months.

As under these Rules, the Director General of Safeguards may seek opinion of any other agency or statutory authority in discharge of his duties. The Director General is also vested with the powers to issue summons for any person whose attendance may be necessary to any proceeding. These enquiry proceedings will be treated as judicial proceedings under the Indian Penal Code. The Authority within the period of 3 months of receipt of Director General’s report, determine whether benefit should be passed to the recipients or not.

As enumerated under these Rules, orders passed by the authority shall be immediately complied with by the registered person, failing which action may be taken to recover the amount that was so payable to the recipients. Therefore, a lot of businesses and analysts have raised their concern over this draconian spot emphasized under the GST command.

The Authority has been provisioned to be in existence for two years unless the GST Council extends the tenure.

To Sum it up

These Rules lay down a 3-step procedure to determine the culpability of an entity. Any compliant received against an entity will be verified by the standing committee, the findings of the committee will be investigated upon by the Director General of Safeguards. The Authority will give its final decision based on the Director General’s Letter. The quantum of punishment, if any, will be decided by the authority.

Therefore, it may be noted that every business registered under GST will fall under the purview of these Rules if any recipient of benefits makes a claim or compliant against the registered business pertaining to non-transfer of benefits under GST.