DIEGO MARADONA – Who owns the name?

Diego Armando Maradona. Player. Legend. 2020 was a year when the world lost many footballing gems, from Maradona to Paolo Rossi, both being stars for their respective nations in the 1982 FIFA World Cup held in Spain, although the latter being the ultimate winner and star of the show.

With the passing of Maradona, one would have thought that the rights over the name itself would be the least of all concerns with respect to his legacy. However, recent news reports in Argentinian news outlets state that a tug-of-war has been going on regarding the rights over the likeness and image of Diego Maradona.  After the passing of Diego, it came to light that a company named Sattvica, S.A., Inc. is the entity which owns the rights to his brand name, image and likeness. Further, the said company is purportedly owned by one Mr Matias Morla, former lawyer of Maradona. It has further been reported that Sattvica has been embroiled in litigation on a global scale to safeguard its rights to Diego’s brand[1].

A search on WIPO’s Global Brand Database sheds light on the scale of rights over Maradona’s name and likeliness being claimed by Sattvica:

Surprisingly, Sattvica has filed applications for trademarks relating to Maradona in many countries, including in India. The mark MARADONA (filed by Sattvica) has in fact attained registration in India, vide registration no. 3144024 dated December 29, 2015 in classes 25, 28, 35, 38, 41, and 43.

Further, from the international applications as filed, it is pertinent to note that the earliest applications were filed in December 2015, back when Diego was alive and (relatively) well. In light of such registrations, one does wonder about whether Sattvica was ever authorised by Diego to file applications containing his name or what sort authorisations did Sattvica rely upon to pass any objections that IP Offices may have. The USPTO is one such office, which strictly scrutinizes such applications. A perusal of the US registration number 5456112 for the mark MARADONA revealed that the Applicant had filed the below documents – 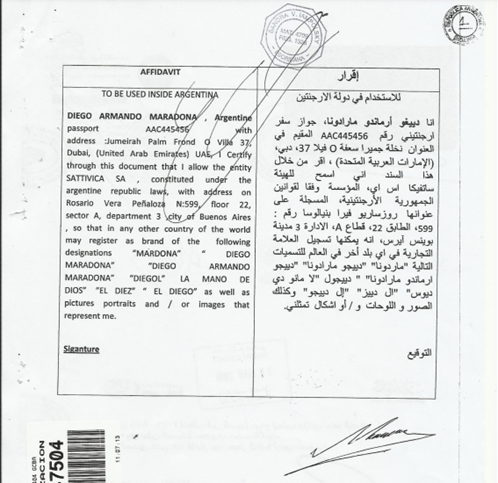 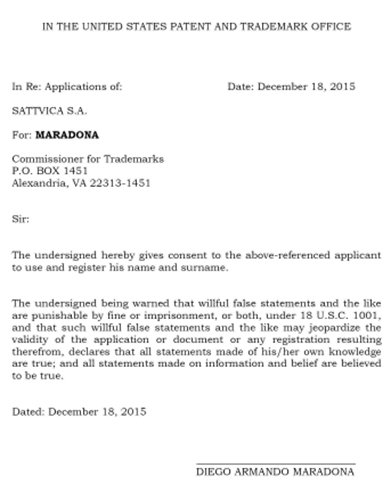 The above documents seen quite over-arching with no sort of checks and balances, which is surprising as the person in question is the late Maradona himself! Further, upon perusal of such a document, one wonders if such a simple letter/ affidavit would suffice, as, in essence, the same seems to entail a wide variety of rights and privileges. In light of such, one wonders how allied rights such as Moral Rights would factor in.

In view of this background, it has been reported that Diego’s family (specifically his children), his legal heirs, have been embroiled in a dispute with Sattvica. The implications of this dispute are so far reaching in the world of sports and gaming that Maradona and his likeness have been omitted from the latest version of EA Sports’ annual football video games, FIFA 22[2], which has been a source of disappointment to thousands of fans and gamers worldwide.

These developments, along with the prima facie, rather broad powers vesting with Sattvica, coupled with the fact that a suit has reportedly been filed against Maradona’s legal heirs themselves, suggest that the said heirs themselves have been deprived of the right to use their father’s name and likeness (as a trademark).

It would be interesting to see how this dispute unfolds in Argentina. The same has a possibility of having a ripple effect on how one uses the image and likeness of deceased sports-persons for commercial purposes.

Can multiple entities trademark the same surname under same class?