Importance and Challenges of Protecting Smell Marks in India 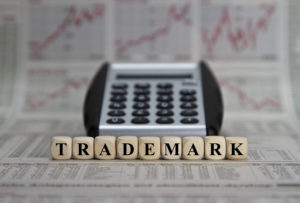 Smell, like taste, can have a lasting impact on the memory and recall of any consumer. Therefore, the smell of a product may create a secondary connection with the brand. However, for a smell/fragrance to be protected as a trade mark, the same cannot be a functional feature of the product and there may be challenges with respect to representation of such marks. Some  psychologists have in fact stated that a human being’s sense of smell is the strongest in the whole body, far surpassing sight or sound.[1]

Position in the European Union

In the European Union, previously according to Article 2 of the EU Directive 89/104/EEC[2], the capability of representing a trade mark graphically was an important factor in determining the registrability of a trade mark.

However, it is difficult to represent a smell mark graphically either through words or through chemical formulation etc.

With respect to the registrability of smell marks in EU, it appears that the law does not specifically bar any person from seeking protection of their smell mark. However, they are required to satisfy the requirement of representing the trade mark graphically. In a very famous and landmark case Ralf Sieckmann v. Deutsches Patent and Markenamt[3], the applicant has represented the mark for which registration is sought through a chemical composition, by giving a chemical formula and also has provided description. He has also submitted a sample, stating that the scent was usually described as “balsamically fruity with a slight hint of cinnamon”. In this regard, the court stated that a scent/smell mark can be granted protection as a trade mark, provided it fulfills the requirement of graphical representation, which is clear, intelligible and self-contained. The court held that, the present trade mark was represented through a chemical formula and few people could ascertain the scent by reading a chemical formula and moreover the chemical formula actually denotes the substance and not the scent of the product. Further, the representation/description submitted by the party, even though was graphical, was not clear or precise. The sample submitted is not graphical, stable or durable. Therefore, since there was no valid representation of the trade mark in question, the application was rejected. However, there are instances where the smell was granted trade mark protection in the UK. For example, Unicorn Products sought to register “the strong smell of bitter beer applied to flight darts”.[4]
However, with the implementation of Regulation (EU) 2017/1001 on the European Union Trade Mark, requirement of graphical representation was removed. Article 4 EUTMR[5] mandates that a trade mark should be capable of distinguishing the goods or services of one undertaking from others and should be capable of representing the trade mark on the Register of European Union in a manner which enables the authorities and public to determine the clear and precise subject matter of the protection afforded to its proprietor. This establishes that a trade mark should be capable of representing in any manner which is clear and precise.

In the case of smell marks, it is practically not possible to represent the smell of a product, and simply describing/representing the smell mark by way of words, chemical formulae etc. may not be strong, clear and precise as it cannot exactly describe the smell that arises from the products. Therefore, it would not be under the compliance of Article 4 EUTMR and registration of a smell mark in the EUIPO is slightly difficult.[6]

Further, the applicant cannot even file a sample of the smell with the EUIPO since according to Article 3(9) EUTMIR[7], filing of samples shall not be considered as proper representation. In Odeur de fraise mûre, EU:T:2005:380[8], the smell of strawberries was applied as a trade mark with a description “smell of ripe strawberries”. The court in this case held that, smell of strawberries varies from one variety to another and the description filed by the Applicant can refer to several varieties and, therefore, to several distinct smells. Since the description filed by the applicant is unclear, not precise and did not eliminate all elements of subjectivity in the process of identifying and perceiving the smell claimed, the said mark was refused registration. Further, it was stated that the olfactory sign in question had not been represented graphically for the purpose of Article 4 EUTMR.

It is pertinent to note that unlike colour marks, sound marks etc. smell marks are not explicitly included in the non-exhaustive list of types of mark provided by Article 3(3) EUTMIR.[9] It is pertinent to note that currently there is no technology that could enable the representation of a smell mark on the Register in a legally acceptable manner. Thus, an application for a smell mark would most probably be rejected under Article 7(1)(a) EUTMR.[10]

Position in the United States

In United States, the scent of a product may be registrable, provided it should be used in a non-functional manner. Therefore, in the United States, scents such as the scent of an air freshener or perfume would be functional in nature and, therefore, not registerable. If a scent is not functional in nature then the same may be registered, provided it has acquired distinctiveness.[11] In the case of In re Clarke[12], it was held that the scent of “plumeria blossoms” in respect of sewing thread and embroidery yarn is capable of being a trade mark.

In the United States, the applicant must mail the scented goods to the USPTO and the specimens for smell marks may not be submitted electronically. To show that the specimen for a scent mark actually identifies and distinguishes the goods, and indicates their source, an applicant must submit a specimen that contains the actual scent and that matches the required description of the scent. The applicants must first submit information about the specimen online using the appropriate form and then mail in the physical specimen.[14]

Some of the examples of scent marks registered in the USPTO are: (1) Minty scent by mixture of highly concentrated methyl salicylate (10wt%) and menthol (3wt%) by Hisamitsu Pharmaceutical Co. Inc.[15]; (2) grape scent of the goods by Power Plus Lubricants, LLC[16]. 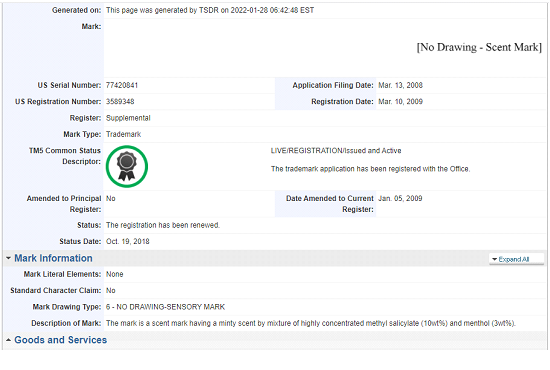 Position of Smell Trademarks in India

In India, a trade mark is defined under Section 2(1)(zb) of the Trade Marks Act, 1999[17], which states that a trade mark is a mark which is capable of being represented graphically. However, in case of scent marks, representing the same graphically would be difficult since a scent cannot be depicted through a written form. Further, a chemical composition of a smell mark also cannot be considered as a sufficient graphical representation since the description is the attribute of the substance itself and not of the scent. Furthermore, a scent/smell mark should be distinctive and should be able to directly associate the products/goods for which it is applied, thereby making it distinctive.[18]

It is pertinent to note that even the draft Manual of Trade Marks stated that since a smell mark cannot be represented in a paper form, it does not satisfy the definition of graphical representation under Rule 2(1)(k) of the Trade Mark Rules, 2017[19], and therefore, a smell mark is not recognized in India.[20]

The difficulty of representing the mark graphically

: Unlike the United States, India does not follow a liberal way in allowing the representation of a trade mark. As stated above, a graphical representation (in a paper form) is mandatory for a mark to be eligible for registration. However, it appears that there is no such technology yet, which can depict the smell/scent arising from a product precisely on a paper or any other viable mode. Therefore, this stands as a major hurdle for applying a smell/scent mark in India and its prosecution and enforcement. In the case of smell marks, it is practically not possible to represent the smell of a product, and simply describing/representing the smell mark by way of words, chemical formulae etc. may not be strong, clear and precise as it cannot exactly describe the smell that arises from the products. Unlike the colour marks or sound marks, which have international classifications such as international colour codes or musical notations, smell marks do not have any generally accepted international classification of smells, which would ease the process of registering a smell mark.

The difficulty of proving the distinctiveness of the mark

Furthermore, for a smell/scent to gain distinctiveness it is necessary to prove that the same has not arisen due to the natural characteristic of the products/goods for which it is applied. Considering the fact that in the recent times, most products are sold with a good smell/scent arising out of them, it might be little difficult to prove the distinctiveness acquired by the smell/scent mark or that the said scent is only associated with that particular brand.

The doctrine of functionality

Thus, it can be understood that, even though India encourages the registration of various non-conventional trade marks including non-visual trade marks such as sound marks, there is always a hurdle for the marks such as smell marks to be registered in India.  It can be understood that this is because of the issue of representing the smell marks graphically. It should be noted that other countries across the world such as the United States are adopting new procedures and techniques with a view to encourage more and more registrations of different kinds of trade marks. For example, to register a smell mark in United States, the USPTO has allowed sending of a sample to the USPTO office, and has waved away the mandatory requirement of only representing it electronically. This has encouraged many entities to come up and apply for various smell marks in the United States. Therefore, one should look at adopting new way and techniques of accepting representation of a trade mark (not necessary graphical representation) as the step ahead.

[2] A trade mark may consist of any sign capable of being represented graphically, particularly words, including personal names, designs, letters, numerals, the shape of goods or of their packaging, provided that such signs are capable of distinguishing the goods or services of one undertaking from those of other undertakings.

[5] Article 4, EUTMR: An EU trade mark may consist of any signs, in particular words, including personal names, or designs, letters, numerals, colours, the shape of goods or of the packaging of goods, or sounds, provided that such signs are capable of: (a) distinguishing the goods or services of one undertaking from those of other undertakings; and (b) being represented on the Register of European Union trade marks (‘the Register’), in a manner which enables the competent authorities and the public to determine the clear and precise subject matter of the protection afforded to its proprietor.

[7] Article 3(9) EUTMIR: The filing of a sample or a specimen shall not constitute a proper representation of a trade mark

[17] Section 2(1)(zb), Trade Marks At, 1999: “trade mark” means a mark capable of being represented graphically and which is capable of distinguishing the goods or services of one person from those of others and may include shape of goods, their packaging and combination of colours