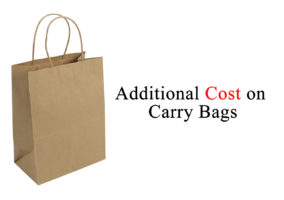 Following a series of judgements in Chandigarh the additional prices levied by the companies and retailers on carry bag from their consumers has been declared as Unfair Trade Practice.

These judgments attract attentions towards a larger and a more pressing issue at hand. The major reason that compelled the companies to charge for their carry bags: plastic ban due to elephantine increase in plastic pollution, not just at a state level but globally.

Statistics collected by United Nations show that today we, globally produce plastic waste up to 300 Million Tones that is equivalent to the weight of the entire human population. This would mean that the earth is literally brimming plastic. The next question that arises is what is being done with such hefty amounts to plastic. United Nation states that only 9% of this plastic is being recycled, 12% is being incinerated and 79% of this waste is being dumped either in landfills, dumps or natural environment.[1]

According to FICCI Average per capita consumption of plastic in India is about 11kgs, and is expected to be 20 kgs by 2020 as stated by Ministry of Petroleum and Natural gas.[2] Polyethene bags were banned by the National Green Tribunal in India in 2008 and fine of Rs.5,000 was imposed in January, 2016.

Plastic poses a major threat to us even in our day to day lives. Apart from the humongous effect it has on the animals namely, being ingested by animals under the impression that it is food has led to death of many animals. It also however has detrimental effects on the heath of humans as Plastics are made up of a variety of toxic chemicals. As such, its uses and exposure are associated with a number of human health concerns. Chemicals leached from the plastics contain compounds like polybrominated diphenyl ether (PBDE), bisphenol A (BPA), and phthalates. These chemicals have been established to upset the endocrine system and thyroid hormones and can be very destructive to women of reproductive age and young children.[3]

All this comes to show why plastic ban, especially banning plastic bags in commercial use was banned by the National Green Tribunal.

In June 2018, the theme of the swatch Baharat mission was beat plastic pollution, in lieu of the same Chandigarh Municipal Corporation conducted various anti plastic raids and awareness drives.[4] Various other steps such as nuked nataks, cycle rallies, walk and talk sessions were organized throughout the Union Territory in an event organized by Punjab State Council for Science and Technology in collaboration with the National Diversity Society.[5]

In today’s cut throat world, where competitive edge is the main aim of companies to enable to perform and come out on top. Unfair Trade Practice is a malpractice that is being breaded due to this strive for an edge.

Unfair Trade Practices extensively explains any deceitful, misleading or deceptive exchange practice; or business deception of the items or administrations that are constantly sold; which is disallowed by a statute or has been perceived as significant under law by a judgment of the court. Generally unfair trade practices may include illegally refusing any transaction, deceptively soliciting customers, disrupting business activities of the rivals unfairly, unfairly excluding competitors.[6]

The judgment of Chandigarh Consumer Forum dated 09/04/2019 imposed a penalty on the infamous shoe store BATA, for charging its consumers Rs. 3 for a shopping bag to carry their purchases home. The evolution of the same can be traced back to another case. The detailed study of the two has been provided below.

In this case penalty of Rs. 10,000 was imposed on the Retail Giant Lifestyle in lieu of charging Rs. 5 as an additional cost for carry bags.

After considering the contentions of both the parties the Forum remarked as follows:

“8. .….we are not impressed with the same, in as much as if the Cashier informed the Complainants about the purchase of carry bag before billing, the same amounts to unfair trade practice and deficiency in service as it would have been very odd and inconvenient to the Complainants to carry the new garments in hand throughout without a carry bag. In this backdrop, charges of such things (paper bags) cannot be separately foisted upon the consumers and would amount to overcharging.”

“10.    It is noteworthy that said carry bag for which the Complainants had to shell out extra amount from their pocket, is a printed carry bag on both sides, which has a prominent display of the advertisement of the Opposite Party and is thus apparently serving as an advertisement for them, whenever the said bag is carried by the Consumer. In this manner, the Complainants and other gullible consumers like them have certainly been taken for a ride by the Opposite Party for advertising their name. Undoubtedly, the Opposite Party has several stores across the country and in the above said manner, made lot of money, thus, the act of Opposite Party by forcing the gullible consumers to pay additionally for the paper bags is surely and certainly amounts to deficiency in service and its indulgence into unfair trade practice.”

CONTENTION OF THE APPELLANT:-

“Explicit pricing of carry bags. – No carry bag shall be made available free of cost by retailers to consumers. The concerned municipal authority may by notification determine the minimum price for carry bags depending upon their quality and size which covers their material and waste management cost in order to encourage their re-use so as to minimize plastic waste generation.”

Hence in light of the same the Appellant contended they are under the obligation to not provide any carry bag free of cost to any customer.

“Explicit pricing of carry bags.- (1) The shopkeepers and street vendors willing to provide plastic carry bags for dispensing any commodity shall register with local body. The local body shall, within a period of six months from the date of final publication of these rules in the Official Gazettee of India notification of these rules, by notification or an order under their appropriate state statute or byelaws shall make provisions for such registration on payment of plastic waste management fee of minimum rupees forty eight thousand @rupees for thousand per month. The concerned local body may prescribe higher plastic waste management fee, depending upon the sale capacity. The registered shop keepers shall display at prominent place that plastic carry bags are given on payment.”

CONTENTION OF THE RESPONDENT:-

While dismissing the appeal the court opined that:

This was a complaint filed against the widely known Shoe Company Bata India Limited, for charging Rs. 3 additionally, for a carry bag, in the District Consumer Disputes Redressal Forum-I, U.T. Chandigarh. Punitive damages amounting to Rs. 5,000 were imposed on the Company.

CONTENTION OF THE COMPLAINANT:-

CONTENTION OF THE OPPOSITE PARTY:-

ANALYSIS OF THE DECSION OF THE FORUM

In light of the arguments advance of the Complainant and the Other Party the Forum opined that:

“5. We had also a glance to the carry bag which is annexed with the consumer complaint in which advertisement of Bata Company was being published as it has been printed in red words “Bata Surprisingly Stylish” which shows that Bata Company is stylish in nature and used the consumer as if he is the advertisement agent of Opposite Party. The purchase of the item along with sale of carry bag is not disputed as per statement put forth by Opposite Party.”

“ 6.  Per this evidence brought on record, we record a firm finding that there is unfair trade practice on the part of Opposite Party in compelling the Complainant to purchase the carry bag worth Rs.3/- and if the Opposite Party is an environmental activist, he should have given the same to the Complainant free of cost. It was for gain of OP. By employing unfair trade practice, OP is minting lot of money from all customers.”

The decision passed by the Forums raise a rather substantial question that in light of the havoc that the plastic pollution has caused not just in our country but globally where do decisions not promoting use of non-disposable bags stand?

Though the catena of decisions discussed above are in the favor of the consumer but are they in favor of the environment? Though there is an imposition on a ban of plastic bags which forces the companies and retailers to switch to paper bags, making these paper bags free is a double-edged sward, where it has its benefits, it also finds some flaws.

Making the paper bags free is a major win for the consumer as they were being used as marketing tools, as the companies had they brand logo printed on the bags and the same was being circulated and used by the consumers and they were additionally being asked to pay for them. The rationale behind the decisions is very simple and logical, when a consumer buys products from a store can he be expected to carry all these products by hand, especially if it has not been mentioned anywhere in the store and the consumer becomes aware of it only when he reaches the cash counter, that he will be charged additionally for the carry bags.

The cons of these decisions is however that though it is not pro retailers it is also not pro-environment. It is a settled fact that plastic is a major threat to our environment, but it is also true that paper wastage is another leading factor towards detriment of our environment. The previous store policy to charge for paper bags, in a way encouraged the buyers to carry their own bags from home when going shopping. This trend is highly prevalent in grocery stores where no carry bags are provided, and the customers carry bags from their own home to carry their groceries. It is not unimaginable that people develop a habit or carrying carry bags when leaving for shopping. This would be both pro-consumer and pro-environment.

The decision could does lift the veil of environment protection claimed by the companies for free or rather consumer sponsored advertisement and prevents unnecessary harassment of the gullible consumers.

A more consumer and environment friendly approach can be to offer other incentives to the buyers on bringing their own carry bags, which would encourage the customers go get their own bags.

Implementation of such programs can be more beneficial for: the consumer, the companies and retailers and the environment which is in congruence with our sustainable development goal: development but not at all costs.