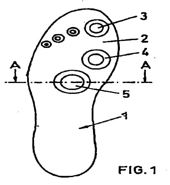 The Plaintiff filed a suit against the Defendant seeking declaration that the threats made by the Defendant with respect to patent infringement are groundless, unjustifiable and wrongful.

The Delhi High Court, on August 24, 2015, restrained the Defendant from issuing any such threat to the Plaintiff on the ground that the Defendant had not been able to show that the patent pertaining to the shoe was granted in India.

According to the provisions of Section 106 of the Patents Act, the Plaintiff is entitled to file suit seeking

– declaration to the effect that the threats are unjustifiable;

– such damages, if any, as he has sustained thereby.

unless in such suit the Defendant proves that the acts in respect of which threats are being issued are arising from patent infringement or from the publication of a complete specification.

In view thereof, in this case the onus was on the Defendant to show that the Defendant has a patent right over the reflex/pressure points.

A conjoint reading of Section 48, 52 and 70 of the Patents Act shows that in order to be successful to claim infringement, there must be granted a patent to the person who has issued the threat/legal notice that the Plaintiff should not violate the rights of the patentee. Since the Defendant had been unable to show that it has a valid patent pertaining to five pressure points/reflex points, the Defendant was restrained to issue any groundless threats through circulars or advertisements or by communication to the Plaintiff with respect to five pressure points/reflex points.

It was thus declared that the threats made by the defendant to the plaintiff are groundless, unjustifiable and wrongful.

The complete order can be found at the below link: