Centre for IPR Promotion and Management (CIPAM), the other day reported that the Indian Patent Office has observed a dramatic push upwards over the previous years with regard to patent examination(s) and grant process.

The process of patent examination and grant has been more streamlined due to recruitment of more patent examiners with the Indian Patent Office (IPO) and the objective of the Department of Industrial Policy and Promotion is to bring down the average time taken to grant patent within 18 months from the current norm of 5-7 years.

As per the below figures published by the Centre for IPR Promotion and Management established within India’s Department of Industrial Policy and Promotion (DIPP), the numbers display that although the filing of patent application has gone down a little, there has been a massive improvement in the number of patent examinations conducted, patents granted and the overall disposals by the IPO. 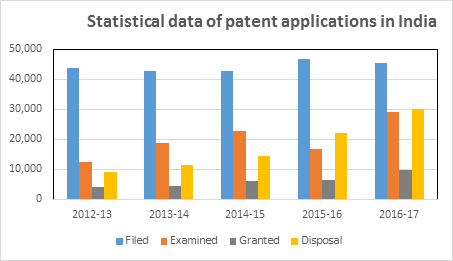