The Office of the Controller General of Patents, Designs and Trade Marks (CGPDTM), India has released a public notice on February 19, 2016 stating that it has, in collaboration with the Delhi State Legal Service Authority (DSLSA), undertaken to initiate a process of Mediation and Conciliation in contested matters of the Trade Marks Registry, Delhi.

This welcome step comes in view of the pendency of Opposition and Rectification matters at the Trade Marks Registry, Delhi, with the objective to liquidate such pendency through Mediation and Conciliation based on Mediation/ Conciliation Rules framed under the Legal Services Authorities Act, 1987. These rules are available at the website of the DSLSA here.

As per the said Public Notice, it has been decided initially to undertake the project on pilot basis by taking up 500 pending Opposition and Rectification matters. 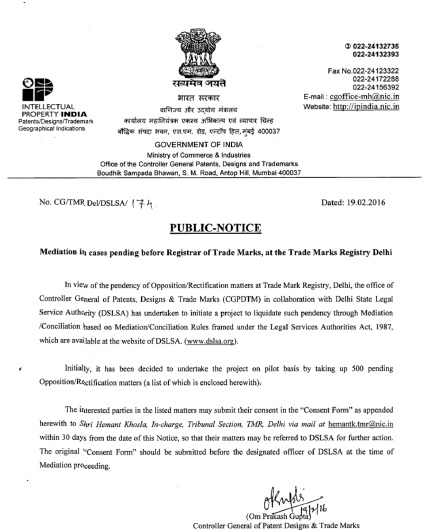 The said Public Notice as issued by the office of the CGPDTM is available here.

A Consent Form has also been provided for, which is to be submitted before the designated officer of DSLSA at the time of the Mediation proceeding. Copy of the draft consent form as made available is produced below: 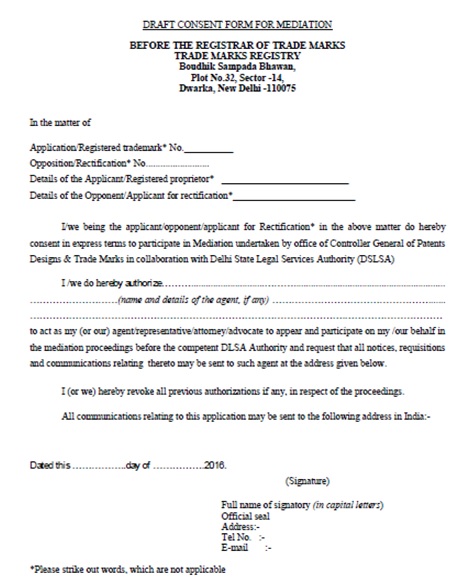 The said draft Consent Form can be accessed here.